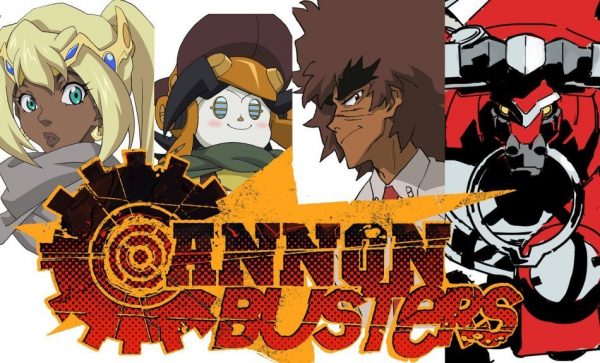 Cannon Busters is the newest original anime series from Netflix, which is churning such things out with the hectic pace of, oh, I dunno, a crazed anime action sequence rife with big guns, barreling vehicles, bulging eyes and splashy freeze-frames, I guess? This cheeky, action-packed series is a long-gestating project from Lesean Thomas, an animation veteran (he was one of the creatives behind Cartoon Network’s The Boondocks) who originally conceived Cannon Busters for the graphic novel format, publishing a few issues in 2004-05. He soon recultivated the over-the-top sci-fi Western as an anime series, but it took a decade-and-a-half for it to come to fruition. Was it worth the wait?

Directly overhead, a blazing hot sun blazes very hotly in a clear blue sky. The desert. One weird-looking thing eats another, smaller weird-looking thing, only to be consumed by a much bigger weird-looking thing. A towering mech with Texas-style long horns shakes down a character who looks like a Fury Road extra. The ‘bot wants information — specifically, the location of the nearest town, because its operator, Philly the Kid (voice of Kenn Michael) REALLY needs to take a dump. Balloon Town, a place with the distinctive whiff of a wretched hive of scum and villainy, except, like, crossed with Deadwood ca. 1870. A robot that doesn’t look like a robot but looks like a young woman, SAM (Kamali Minter), and a pint-sized maintenance robot that looks like a robot, except it has hair, Casey Turnbuckle (Stephanie Sheh), are questing to find Philly, for reasons as yet undisclosed. Philly, it turns out, has a $10 million price tag on his head, but that’s not why SAM and Casey want him. But that is why a bunch of gnarly bounty hunters blast a basketball-size hole in him just as he emerges from the W.C. Philly shrugs as the dripping, gaping wound heals in seconds. A few seizure-edits later, the vintage boat that looks like an old retro-futuristic Cadillac that’s parked outside goes into Raging Bull mode, allowing Philly, SAM and Casey to escape. But not before SAM says, in clueless-C-3PO style, “These aggressions are inappropriate” smack in the middle of battle — and then, smack in the middle of the same battle, her mouth drops open to reveal a big cannon, prompting one of the bounty hunters to exclaim, “It’s a Cannon Buster!”

The bounty hunters aren’t the odd trio’s only adversaries, though. Some gun-headed, roller-blading mechs take pursuit as they attempt a getaway, and there are more explosions and incidents of inappropriate aggression as Raging Bull dispatches them — but not before falling off a cliff just as the credits roll. Our Take: Anime’s tone and visual style can be an acquired taste — which is why the genre rarely crosses over from its passionate and artful niche. Like some OTT adult-oriented ‘toons before it, Cannon Busters is loud, brash, outrageous and exaggerated to the point of hyper-hyperbole. But it draws in aging anime dabblers — something I might, perhaps, resemble — with the perfect referential bait: Star Wars, old Westerns, ’80s video games, The Road Warrior.

The running joke that one needs to insert quarters into Philly’s car to start it — and four quarters to transform it into Raging Bull mode — is a great one, clever and inspired, although you’ll wonder why he doesn’t have the key to pop open the interface and flick the trigger switch until he has 99 credits and can fight all night, taking hits from his cherry red Slurpee and bites from Hot Sam pretzels, hoping his mom isn’t too pissed, waiting outside the mall with the family station wagon running in the fire lane. Like I said: aging, referential. And it makes sense that Thomas is a child of the ’80s, although he likely spent more time with Akira than many of us. Anyway. Cannon Busters is action-packed and enjoyable, although firmly of its genre, not transcending it. Its conceptual world-building is strong, bolstered by its glib sense of humor — SAM, “programmed for friendship” until she sprouts a massive mouth-cannon of course, exhibits her social shortcomings right off the bat by kindly introducing herself to a dying reptilian marauder freshly blasted out the saloon door, hand outstretched: “I see you’re fatigued! I look forward to our next conversation!” she chirps, as the humanoid thing dies, tongue hanging out its beak. As the guy in RoboCop who eventually gets melted by toxic waste and splattered by a speeding car says, “I LIKE IT!”