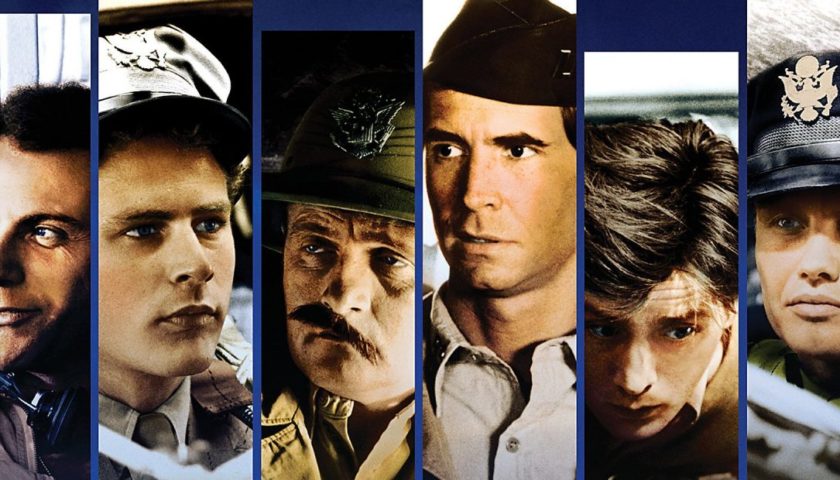 Review: Only television could contain “Catch-22.” Joseph Heller’s capacious World War II novel, stuffed with philosophical monologues, paradoxes, and a wide-ranging cast of expendable flyboys centered on the inertly gloomy Yossarian, provides little foothold for any potential reworking. A 1970 feature adaptation (Mike Nichols’ little-remembered third film, made after “The Graduate” and “Who’s Afraid of Virginia Woolf?”) was so fraught that a Time cover story on the director quoted him as saying he was “pregnant with a dead child” during production. George Clooney’s new attempt, streaming on Hulu May 17, signals the star’s ambition, and his pragmatism. The archetypal movie star executive produced the series, appears in it, and directed two episodes, and he has come to TV for a reason: It’s a way to surmount a tricky piece of the American literary canon, but to do so with the benefit of six hours and streaming-service money.

But if only TV could make “Catch-22,” perhaps only TV would be foolhardy enough to try. The new series works better than it should. It elides some of the worst of the novel’s degradation of women, streamlines as best it can the most verbose of the vignettes and builds out Yossarian — played by Christopher Abbott in a performance that announces the leading-man arrival of a long-simmering talent — into a character whose angst we feel. Yet the series, in thrall to and in the shadow of one of the most sharply written novels of its era, never finds a way to live on its own.

What works, here, works well. Abbott deserves special mention for cracking Yossarian. The actor is preceded by a helpful bit of persona: He came to prominence in a fine supporting performance on “Girls” before quitting the show abruptly, then returning seasons later with a tough-guy outer-borough accent. The vocal affectation, which he slightly modifies for “Catch-22,” is telling — Abbott, like many actors of his generation, exists within the sphere of Ryan Gosling’s influence. But he brings something new, too. His lingering macho affect is the last glimmer of a brashness that, we can tell, was already beaten out of him before the story began.

This Yossarian is more worn and more broken than Heller’s. A crucial scene of senseless violence at the series’ exact midpoint features Yossarian staring in mournful disbelief, while in the novel he futilely tries to prevent the cataclysm. This Yossarian knows he shouldn’t bother trying to effect change. And Abbott is more convincing as a character openly disgusted by his cohort’s abuse of women than the Yossarian of the novel, both because this adaptation cleans up Yossarian’s behavior and because Abbott brings a special sensitivity invisible on the page. The novel’s Yossarian speaks in the same tones as everyone around him — brutish, yet inflected with lofty philosophy. Afforded the opportunity to introduce some shading, Clooney and his fellow directors (Ellen Kuras and longtime Clooney collaborator Grant Heslov each helmed two apiece) cleverly set Yossarian apart from his fellow enlisted men. The rest of the battalion are well cast to achieve an ambient sameness. They eventually coagulate into a mass of grumbling compliance. The mass sometimes looks like Rafi Gavron and sometimes like Austin Stowell but never like Abbott.

Yossarian inverts the world around him. His fellow conscripts are benignly accepting of their ever-rising mission count, even eager to fly, but increasingly apocalyptic in their pursuit of off-hours fun; our hero views continued missions as an emergency from which he needs to escape and thus has no need to obliterate himself when the flying’s done. Abbott is at his best in scenes that contrast the doings of war — aerial missions that might elsewhere seem not merely heroic but outright glamorous — with his own beleaguered blankness. He’s not angry or upset at his circumstance. Flying high but unable to take in anything but his own misery, he’s just over it.

A little ironic counterpoint, though, can go a long way. Just as in Clooney’s star vehicle “Up in the Air,” the emptiness of life in the sky loses impact upon frequent repetition. And, on the ground, the project can feel ensnared by its own source material. Notably, dialogue-heavy scenes involving military superiors — played by Clooney, Kyle Chandler, and (best of the three) Hugh Laurie — grow swamped by Heller’s logic puzzles, more fun on their own terms than as language a human must deliver. The novel’s most lasting impact has been the very concept of a catch-22, used generally to refer to an unsolvable paradox but here, specifically, the “catch” that keeps men trapped in the military. (To wit: To know one should be allowed to stop flying indicates a soundness of mind that demands one continue.) The screen time it takes for Heslov, as the base’s doctor, to explain the concept ticks by painfully. Clooney, cast as Lt. Scheisskopf, serves himself a similarly chewy bit of ham as he showily explains, over quite some length, why Yossarian’s having been released from service is not a suitable justification for his actually leaving the base. Piloting comes to feel like a relief, not a grim responsibility: For all the stress it brings Yossarian, at least no one’s talking up there.

This chatter, more than the surfeit of set-pieces and characters, is what makes “Catch-22” so challenging for Clooney and his top-shelf collaborators. (The whole series was written by Luke Davies and David Michôd, both high-profile screenwriters.) A first novel written in the biting satirical style most easily available at the beginnings of careers, Heller’s book overwhelms with its need to communicate contempt in so many simultaneous registers. The fact that it has so relatively quickly entered the literary pantheon deflates some of the danger of its central gambit — recasting what is widely understood as a nationally-defining act of heroism, the U.S. involvement in World War II, as a staging ground for timelessly American waste and inanity. And it attracts a name talent like Clooney, who converts the novel’s cruelest bits to absurdities as if to avoid offense. He applies burnishing gleam to a project whose raucous, long-winded love of its own ideas would seem to demand a talent more willing to risk, to go toe-to-toe with and genuinely engage with a novel that pushes back on any adaptation. If “Catch-22” is unfilmable, it’s because those who are in a position to remake it are well-established enough not to understand the spirit of unpleasant, desperate mania that propels the novel relentlessly deeper into violence. Hulu’s “Catch-22” is elegantly, carefully made. This is, perhaps, its greatest departure from Heller’s novel, and the reason why it feels quite so at war with itself.