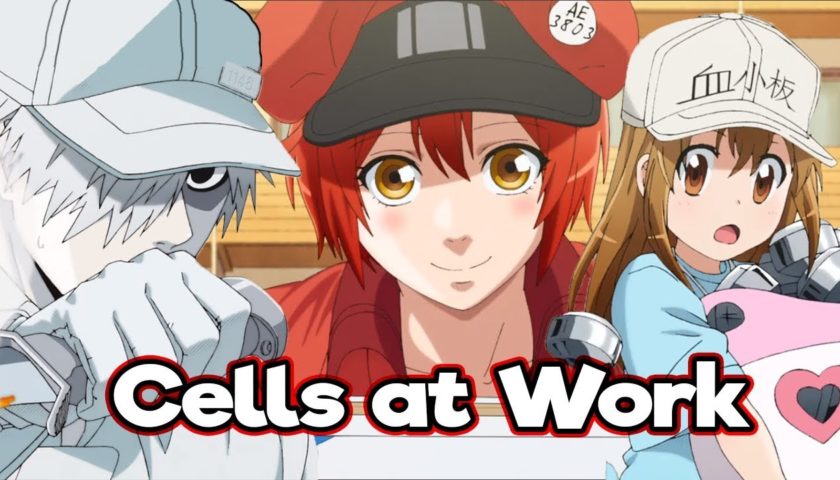 Review:This series was one of the most unique ones that most have been anticipating since the start of the year, and when it arrived in the lackluster Summer season, aside from the certainty that does not disappoint, it is entertaining to the mildest degree, while having a lot of *pokes* at the function of the most important system: us human beings.

Now, I don’t care that whether you have studied subjects that are close to this, but I’m fairly certain that no matter our background as people whom have learned about cells in one way or another, Hataraku Saibou, or Cells at Work!, will definitely please your senses that you are learning about yourself, and the cells that work hard to be able to sustain you in the long run and grow stronger. With that said, everyone, be it otaku or non-otaku, have at least witnessed this anime, and it really broke the conventional walls that this is something that speaks to everyone, as it did magnificently.

The story is as clear-cut as it gets: Everything that you see within a microscope, are your daily drivers, the cells at work where every funcion is as important as the other. Now, I get it, it’s a series that’s worth the educational take, but thankfully it’s not like a heavy plot pointer of info-dumped force-wrecker, and at least just demonstrates just about right and doesn’t force it on us, which is a good thing. And as usual, the Black Clover aesthetics come back with the usual body-explaining capped-repeat to make sure that you understand what is going with your own body, and then addresses the episodic issue at hand. Honestly though? This is about as entertaining as it gets for anime to get very personal with its viewers, and it succeeds well in that regard.

The host of characters, oh sorry I mean cells, are the strongest suit of the series. As with portraying the exact minute details of the cells right down to the extreme, I’d say this is a faithful adaptation of the human body. I mean sure, we all know what the Red (Erythrocyte) and White (Neutrophil) blood cells (voiced by the wonderful Kana Hanazawa and Tomoaki Maeno) do and their properties that keep our body safe from harm, but have we ever wondered: “What about the other cells, like the silent killers Macrophage, the disease-preventing killer and helper T cells, the body reconstructing Platelets (ravioli, ravoli, don’t lewd loli platelets!), the weak-willed but strong Eosinophil, to name a few?” The monster designs were weird as hell, especially for the viruses like the mucus-grotesque cedar pollen ones that are easy to kill to the major ones that could cause a disease that could cause serious consequences like heat stroke, hemorrhagic shock and food poisoning. Overall, props to character designer Takahiko Yoshida for his pretty work here.

David Production, the same studio behind Jojo’s Bizarre Adventure, was a surprise pick for a studio to work on because their work of repertiore really varies from strength to strength, and adding to this, Hataraku Saibou becomes a fan favourite due to their quality of work done here. For example, the “sneeze” segment (that was meant to feel like an explosion) right at Episode 1 was hilarious and insanely funny, and right after that in Episode 2 we’re introduced to the children-like loli platelets (which has become a favourite meme and the pivotal point of the “pressing the loli cheek” smiles), not to mention that to put the icing on the cake, the killer T cells in Episode 3 are the perfect reference to Jojo with the bastardized character figure and the single ponytail hair, that was anything but a fine reference. And in order to make our cells feel like they’re at “real” work, the action scenes around the white blood cells in all types against the numerous viruses with the bloody scenes and over-the-top action. The reason for the drop in score is because some episodes had a minor drop in quality (but not by much), but it is still a visual treat nonetheless. With careful planning and perfect replication, this is a good series to boot its animation quality.

The music is one where it might get on your nerves, but for what it is, I liked it a hell lot. The OP which is just a collaboration work between the character VAs for Red and White Blood, Killer T and Macrophage really sounded like the mission to keep the human body working, is mundane but the essence is what gives it a home-run strike. There was one episode where the OP was replaced with Killer T and Macrophage VAs, and people are wondering what was that, and that’s just the 2nd cour of the song, which still is good to boot. And oh good god the ED, ClariS nails it once again (as is with every song that they made) with the happy visuals and tones. The background scenes were just as adequate to provide much needed movement for the overall setting, and it’s A-OK!

If there was that one definite show that will stand the test of time, it will be this one, much lauded for its “breaking the fourth wall” attention that aside from many casual anime watchers, EVEN the workers of true professions (doctors etc.) find that this anime is really a testament to how much knowledge it is given and took all of that into great consideration to keep it as linear as real life as possible. For the Summer 2018 season alone, this one could be many people’s AOTS material and for excellent reasons. if you were skeptical of how the anime medium takes cells into consideration, I highly, HIGHLY plea you to watch this anime, it’s definitely very responsive, reliant and relatable to all of us as imperfect human beings. Now, if you excuse me, I’m gonna take notes and learn as much as I can to regulate my body for the better!

…Or is it, waiting until the spin-off, Cells at Work! BLACK to be made???