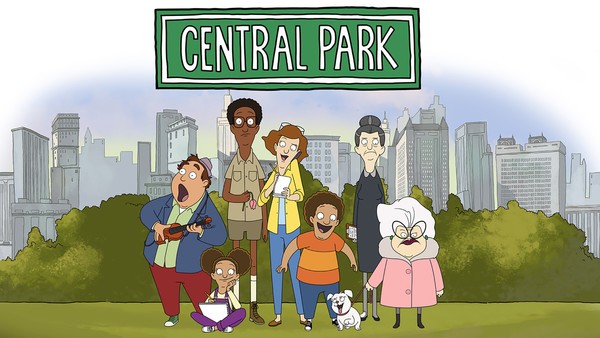 To say “Central Park” marks Loren Bouchard’s first foray into animated musicals would be almost as misleading as saying it’s his first foray into animated comedies. The Emmy-winning creator of “Bob’s Burgers” (and co-creator of the cult classic “Home Movies”) has been blending genres for over a decade on his hit Fox sitcom, asking the Belcher family to sing, dance, scare, play games, soap up some operas, and more. “Bob’s Burgers” is a boundless engine for creativity, in part, because its episodic structure allows for constant reinvention, but also because it’s premise is so simple.

“Central Park” is both a more focused and a more ambitious series. Though similarities in animation styles, senses of humor, and family dynamics evoke immediate comparisons between the Apple TV+ original series and its broadcast predecessor, Bouchard’s latest leans on a more serialized narrative about a park manager trying to protect public land from a greedy developer. But that’s not all: “Central Park” also expands the cast to accommodate ongoing stories and one-off arcs, makes the recurrent musical numbers seen in “Bob’s” a regular part of every episode, and adds an onscreen narrator (voiced by co-creator Josh Gad) to boot.

Gad’s chipper raconteur offers more than just a handy way to tie all the stories together — he also doles out educational facts related to Manhattan’s largest park and steps in to help out as a supporting character as needed. He’s a utility player meant to accommodate the show’s unwieldy aspirations, and the first hint that each 25-minute episode may be overstuffed.

“Central Park” is well-built, it’s well-sung, it’s well-made, but it’s also got too much going on for its own good, as some of the eccentric charms and comfortable pacing that makes “Bob’s Burgers” so damn easy to watch are lost to a near-constant sense of urgency. Keeping the multiple serialized arcs moving forward takes time and commitment, but “Central Park” doesn’t want to cut any of its other big ideas to make room. (Perhaps because there are three total creators: Bouchard, Gad, and Nora Smith, as well as two more executive producers, Sanjay Shah and Halsted Sullivan.) On the one hand, it’s exciting to see such talented professionals really go for it, especially when they’re unwilling to turn in bloated episodes or settle for remixing their past hits; on the other hand, these early episodes aren’t yet on par with Bouchard’s best TV — and they’re far from his weirdest.

Meet the Tillermans! This four-person family lives in the heart of Central Park, where Owen (Leslie Odom Jr.) serves as a devout park manager. His wife, Paige (Kathryn Hahn), just snagged a promotion on a fourth-tier New York City newspaper to cover the news beat, while their children, Molly (Kristen Bell) and Cole (Tituss Burgess), are both making their way through the growing pains of middle school. Owen’s episode arcs tend to focus on park upkeep, while Paige’s see her tracking down related stories and Cole’s examine his heartsick relationship with a dog who belongs to someone else. Molly, though, is an avid artist who draws cartoons where she’s a superhero. These black-and-white sketches can be a little redundant and might work better in full color, as she imagines her hair turning into an extra set of super-powered hands, but they do add another level of visual flair to an already stylish show.

But after years of dividing episodes neatly into two arcs (one for the Belcher kids and one for their parents), Bouchard now adds a permanent C-plot to the Tillerman’s mix with Bitsy (voiced by Stanley Tucci), a wealthy hotel heiress who dreams of establishing a real estate empire — built right on top of Central Park. Most of her screen-time is spent bickering with her bitter assistant, Helen (Daveed Diggs), blocking out her long-term plan for park domination, or both, but there are moments where Bitsy is the biggest weirdo of them all. When she’s looking for a new party hat, the options presented are increasingly wild, and the fourth episode introduces the possibility of ghosts. It’s a shame her time gets cut short, or that there’s no room for similar eccentricities elsewhere, but her addition to the main cast exhibits one more element episodes should strain to include.

Bitsy also illustrates an offscreen issue hovering over “Central Park”: blind casting. Over the years, Bouchard has seen great success in hiring men to voice women: John Roberts is an excellent Linda Belcher on “Bob’s Burgers,” and Dan Mintz deserves much of the credit for making Tina into an icon for angsty, lovestruck teens. (Bouchard himself even played Josie Small in “Home Movies,” though that’s a very small part.) Rarely, however, does he cast the other way, with women voicing prominent male characters, and “Central Park” takes things a step further, not only seeing Stanley Tucci play a vindictive older woman, but Daveed Diggs play her vengeful white assistant, as well as Kristen Bell and Tituss Burgess as biracial teens. (Owen, their father, is black, and Paige is white.) Credit to Tucci and Burgess, especially, for providing distinctive and committed voicework that immediately connects with their characters, but viewers’ all-around comfortability may vary, as it’s a bit frustrating to see Apple TV+ continue the long-standing practice of prioritizing big-name actors over onscreen representation.

It also doesn’t vibe with the show’s wholesome nature. From the narrator’s fun (and not-so-fun) facts about Central Park to the fight to preserve public space over private industry, Bouchard’s series is bursting with endearing qualities. The music — which drops its most addictive banger in the first episode, “Own It” — is uplifting and clever; the colors are lively and eye-catching; the stories are triumphant tales of people coming together, and, despite its TV-14 rating, the first four episodes offer good hooks for all audiences — or audiences over, let’s say, 10? 12? (There are a few sexual innuendos.)

“Central Park” moves smoothly, introduces distinct characters, and sets engaging stakes, both for each individual protagonist and the family as a whole. You’re on board to see how the Tillermans will save Central Park, and Bouchard also hints at TV’s favorite thematic tie-in these days — class conflict, though on far more family-friendly terms than “Snowpiercer” or “Succession.” There’s a lot of potential within an already streamlined package, even if it’s threatening to burst open at any minute. So long as the season settles into a groove and manages to avoid overwhelming itself, “Central Park” looks to be a worthy successor to a landmark sitcom — even if there’s still room for improvement along the way.