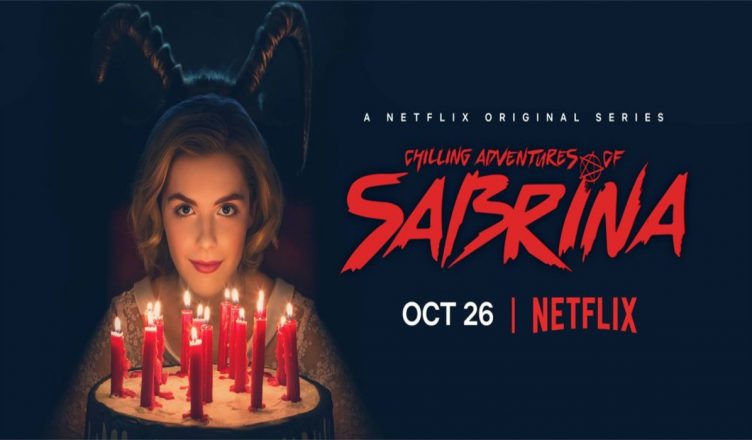 Review: Much like Riverdale put a new spin on teen high school dramas, Netflix’s Chilling Adventures of Sabrina will completely change your perception of Sabrina Spellman (Kiernan Shipka) – at least if you grew up with the wholesome teenage witch portrayed by Melissa Joan Hart in ABC’s TGiF lineup.

Here, Sabrina’s spells involve Latin incantations rather than pithy poems, Salem the cat isn’t a sassy puppet (although we kind of wish he was), and the leader of the witches isn’t Penn Jillette, but the devil himself (there’s a whole lot more Satanism in this show than you might’ve been expecting). Of course, for fans of the Archie Comics title of the same name (written by showrunner Roberto Aguirre-Sacasa) none of this will seem shocking at all – and viewers who dig the tone of this wicked teen tale will probably want to rush out and stock up on reading material.

Chilling Adventures of Sabrina has marketed itself as a series with more in common than Rosemary’s Baby and The Exorcist than the likes of Bewitched, and while the premiere doesn’t have quite that level of horror (although that doesn’t mean future episodes won’t), it’s still an effectively creepy twist on a familiar story – like a dark funhouse mirror of the original show, with names you recognize but character dynamics that may surprise you. That’s especially true of Sabrina’s aunts, Hilda (Wonder Woman’s Lucy Davis) and Zelda (Lord of the Rings’ Miranda Otto), the latter of whom is an icy devotee of the Church of Night who is determined that her niece will follow in the rest of the family’s footsteps and essentially sell her soul to Satan in exchange for magical powers and deaccelerated aging.

As in the original series, Sabrina is a half-witch – with a magical father and mortal mother – which leaves her torn between two natures. She has a mortal boyfriend, Harvey, and a group of friends in Greendale, so she’s in no rush to be shipped off to a magical school to study the unseen arts and cut off all contact with her mortal life, but she admittedly enjoys the perks of being a witch and still wants to please her family, setting up an understandable conflict that will seemingly drive the season.

There’s plenty of high school drama in the first episode, which is the show’s only real hint that it could’ve potentially ended up on The CW as a sister show to Aguirre-Sacasa’s Riverdale (and it’s tantalizing to imagine how Riverdale might’ve shifted into genre territory to facilitate a crossover if the shows had been airing on the same network), but at least in the premiere, Sabrina’s witchy world is far more fascinating than the mortal stuff. It’s understandable that the writers would want to ground Sabrina’s struggle by introducing us to the friends she loves and doesn’t want to leave behind, but the premiere does drag a little when the action shifts to Baxter High and its more mundane teen dilemmas, since the traditions and rituals of Sabrina’s magical world are so intriguing and clearly well thought out.

One of the biggest surprises of the premiere is the character of Ambrose Spellman, Sabrina’s pansexual cousin (and a character who wasn’t in the original show), portrayed with easy charm by Chance Perdomo. Ambrose is a snarky delight every time he’s on screen, and there’s clearly a lot of backstory the show still has to reveal about him (we have no idea why he and Hilda have British accents while Sabrina and Zelda don’t, but weirdly, we’re OK with it). And despite not being a sassy puppet, the new iteration of Salem manages to steal every scene he’s in.

The show certainly takes advantage of Netflix’s lack of broadcast censorship – it’s not overly gory, but there’s plenty of freaky stuff afoot, giving it a slightly more adult tone than the likes of Riverdale – and it has an effective way of building tension that bodes well for the series as a whole. Even the opening credits are super creepy, setting the tone while paying homage to the original comics iteration of the character.