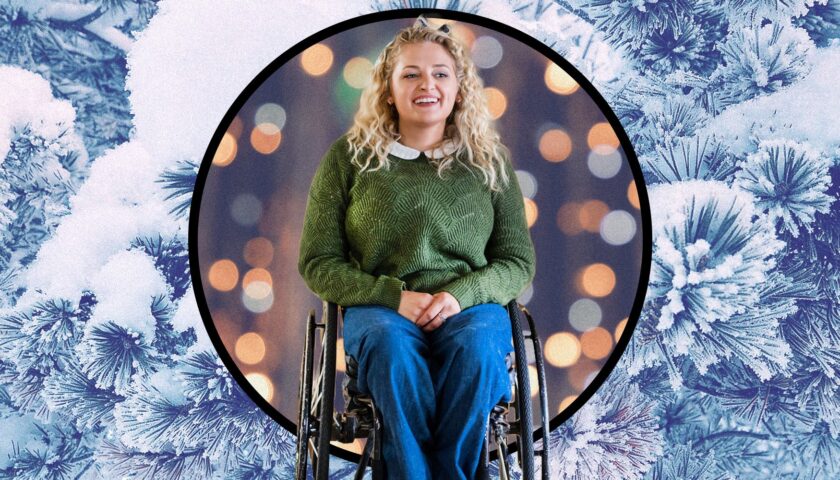 On a scale of holiday cheer ranging from the Grinch to Buddy the Elf, I’ve leaned decidedly toward the green guy for most of my adult life. Familial stress aside, it sucks being single during “the most wonderful time of the year.” Because of this, I’d avoided the TV Christmas movie genre like the plague—until a few years ago, that is, when Sarah Drew starred in Christmas Pen Pals. Drew had made a pretty convincing runaway bride on Grey’s Anatomy, and if I could handle that trope, I could watch a cheesy couple steal mistletoe kisses by the fire.

Since then, I’ve become a TV Christmas movie addict. I actually love living vicariously through whatever flavor of vague career-woman-turned-love-interest Drew or Hilarie Burton or Bethany Joy Lenz is playing for 90 minutes. Their happy endings are set in stone, unlike mine.

As a wheelchair user who has all but given up on dating apps, I’ve begun to doubt I’ll have a meet-cute that’s guaranteed to last like the ones bestowed upon made-for-TV’s leading ladies.

But on December 6, thanks to Lifetime, I can finally watch someone who looks like me get their happy ending. In Christmas Ever After, Ali Stroker makes TV history as the first wheelchair user to star in a holiday movie. In the festive rom-com, the actress plays Izzi, a writer whose fictional characters and their perception of “perfect love” are preventing her from seeing what’s right in front of her: Matt (Daniel di Tomasso). He’s gorgeous, and he just happens to look identical to the man on the cover of Izzi’s romance novels.

Christmas Ever After doesn’t just help fellow wheelchair users believe we’ll fall in love—believing that it’s possible to fall in love while disabled isn’t actually very hard—it’s the details of being in relationships that can present more roadblocks for us. And the movie honestly and expertly navigates those obstacles.

I don’t have much dating experience, but before one first date, a guy I had been messaging on a dating app conveniently mistook a joke I made about cheap wine and bailed on the outing. He explained his reasoning like an afterthought: “You seem needy.”

It’s one of the worst things you can say to someone with a disability. We spend a lot of time trying to attain conventional “independence” and “success.” So even if the term “needy” apparently referred to something other than my disability, it triggered me. If I was going to have to spend emotional energy pretending I didn’t (potentially) have a few more needs than the average woman on dating apps, it wasn’t worth my time. A reality that Stroker can relate to as well.

“I know that one of the things that I felt insecure about as a younger girl and woman was love stories,” says Stroker. “Like, ‘How do I fit into a narrative about love and romance?’”

But Christmas Ever After finallygives disabled young people the chance to see how they fit. The fact that abled viewers will see it too is a necessary bonus.

Take, for instance, the scene in Christmas Ever After where Stroker and di Tomasso literally depict what physical intimacy could look like for a couple when one partner is disabled and one is not. “I think that one of the fears for people with disabilities is: ‘What are the logistics going to look like? How do I do this if I’m sitting, somebody else is standing?’” Stroker says. “It’s just kind of a dance and you figure it out and if somebody is taller than you they lean down to you.”

It sounds simple, because it is. But there aren’t enough stories about people with disabilities on TV to make mainstream society accept this as fact yet. GLAAD’s 2019-2020 “Where We Are On TV” report, which tracks the representation of minorities on TV, found that there were only 27 disabled characters on primetime network TV shows last season. And though the exact number of disabled actors who play disabled characters is not recorded, right now in Hollywood, hiring a disabled actor to play a disabled character is the exception rather than the rule.

Lifetime took the first step toward authentic representation when they cast Stroker. She explains she loved Christmas Ever After in part because it was just a romance movie, but she also had conversations with director Pat Kiely and executive producer Julianna Hays about adding details to the script that would still make it feel true to life for a wheelchair user. “In a collaborative setting, I don’t think it’s productive to just say ‘I know this doesn’t work.’ I think it’s important to say, ‘Okay, this doesn’t feel authentic, and here’s a way to solve that problem,’” Stroker says. “And we did that all over the place, and I think that it really enhanced the story and the entire movie.”

It was Stroker’s idea to swap an ice skating date with bowling—a relatable request for anyone who uses a mobility device. “As you know, being a woman with a disability…snow [and ice are] not great,” she says (in what is perhaps the understatement of the decade). “Indoor activities are sort of the name of the game for me, and I was able to just bring my life experience and suggest something that did work.” Bowling may not be quite as festive as ice skating, but Stroker and di Tomasso manage to make teaching someone how to hold a bowling ball romantic—perhaps because the scene felt so organic to Stroker’s lived experiences.

I’ll file that date idea in the back of my mind if I ever get on the apps again. Stroker got me considering it, especially while discussing what playing Izzi taught her. “When you have an idea of how something should go, and you are not open to being flexible, a lot of times it will create chaos in your life,” she explains.