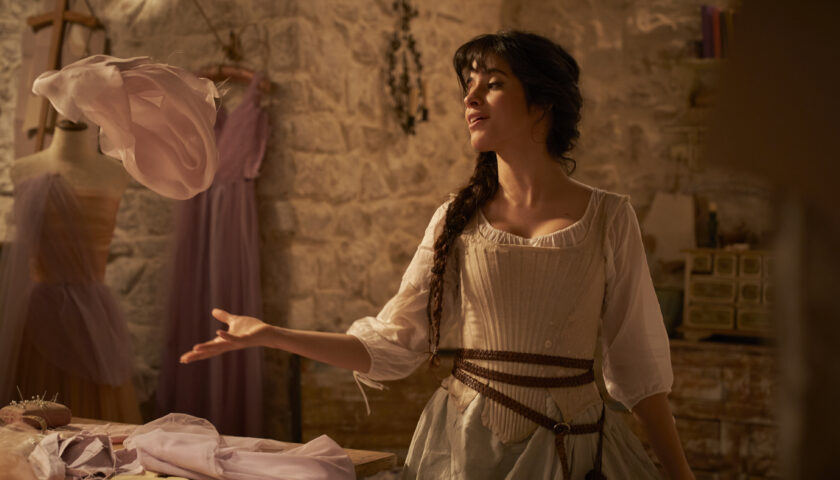 From the outset of Amazon Studios’ new “Cinderella” movie, writer-director Kay Cannon welcomes audiences into a fantasy unlike any before it, putting a glimmering girl-boss gloss on the oft-adapted fairy tale. In this heightened unreality, characters can break into song with a Janet Jackson chart-topper as easily as they belt out a new Broadway-style power ballad. This latest retelling of the Charles Perrault classic offers a feminist-friendly update as its titular heroine dreams of a career, not a man, to whisk her away. While Cannon’s inspired creative approach and jukebox musical style all point to an elegant and empowering redesign of this most familiar of garments, her execution puts quite a few tears in the fabric.

Ella (Camila Cabello) has been relegated to a life of servitude after her father died years prior, leaving her in the care of his cruel second wife Vivian (Idina Menzel), further scrutinized by her obnoxious stepsisters Malvolia (Maddie Baillio) and Narissa (Charlotte Spencer). Nicknamed Cinderella because of the layer of soot she acquires doing household chores, she dreams of breaking out of the home’s dingy basement and into the world of fashion as a dressmaker. But since the times are not conducive to a career-minded woman, and the townsfolk are set in their old-fashioned ways, all she can do is sing to vent about her burning desires.

Meanwhile, potential soulmate Prince Robert (Nicholas Galitzine) is trapped in a life he’s reticent to lead as his arrogant father King Rowen (Pierce Brosnan) and kindly mother Queen Beatrice (Minnie Driver) are demanding that he find a bride and take the throne. He’d rather slack off with his band of merry men than marry and wear the crown. His smart sister Princess Gwen (Tallulah Greive) is the more suitable sibling to lead the kingdom, except she’s up against unabashed male chauvinism guiding the king’s call.

The plan is to throw a grand ball, with invitations sent to the entire kingdom, giving the reluctant royal ample options from which to select his perfect match. Yet he meets true love Ella before the lavish affair is set to take place, first discovering her at the announcement ceremony and then later, in disguise, bumping into her at the marketplace, buying an evening gown from her. As fate and Ella’s fabulous fairy godmother Fab G (Billy Porter) work their magic, conflicts surrounding her career goals surface, threatening to separate the dynamic duo.

Cannon takes great craft and care to ensure that her heroine’s internal and external motivations serve to drive the story forward. This modernized take has the sympathetic protagonist wrestle with a compelling conundrum, figuring out how Ella and her prince can continue to love each other while attaining their respective career ambitions (or hers, at least, since he maddeningly never verbalizes what he wants in that regard). Their superficial struggle, surrounding class structure and wealth disparity, is assuredly still part of the tale’s DNA, culminating in an empowering musical number (“Dream Girl”) in which all the women, led by Vivian, join together to sing about the stifling, suffocating societal sexism they’ve endured. This showstopper hits like a sledgehammer to the glass ceiling that restrains them all. Humanizing Ella’s tormenter in the process may seem ill-advised, but it winds up being one of the film’s blessed surprises.

Still, for all the innovative, intelligent decisions made, there are an overwhelming number of frustrating creative choices. The movie’s pacing is inconsistent, especially when it comes to character development, which can feel at once underdeveloped and overstuffed. From the stepsisters (who are softened to the point of serving little to no purpose) to the members of the royal court (whose arcs are extraneous), practically everyone beyond Ella and Vivian suffers greatly from tissue-paper-thin character motivations that pivot on a whim, making the audience question why these superfluous story threads are there at all. It’s clear Ella is the underlying force inspiring change in these folks, but the reasons instigating those changes defy logic.

Lavish musical set-pieces, this film’s bread and butter, fail to immerse or transport audiences as intended. Though designed to conjure energy and bewitching wonderment in their design, there’s a pervasive lack of aesthetic intrigue and individual identity. These numbers are exhausting, not enthralling. Composed like music videos, with quick, sharp cuts alternating between wide and medium shots, these sequences do a disservice to Ashley Wallen’s wonderfully anachronistic choreography and Ellen Mirojnick’s breathtaking costumes. The wonderful wardrobe is valued for its poignancy and power in the creation of Ella’s magical ball gown, only to be undermined in later scenes, as the film plows through palpable moments like Ella’s designer debut.

While some of the material sags, a few performances uplift the indomitable spirit of the time-honored tale and its refashioned sentiments. Cabello is a magnetic screen presence who demonstrates a natural sense of comedic timing, infusing her character with vulnerability, compassion and effervescence. She and Galitzine share a sweet, chaste chemistry. But it’s Porter who steals the show. He does not disappoint. He’s vivacious, vibrant and knows precisely how to deliver a satisfying “well, well, well” — so much so that younger audiences might assume he invented its usage. His charisma sparkles as brightly as his sequined ensemble, and his sole physical appearance (he also partially narrates this journey) is filled with magnificent, magical splendor.

Even though prior iterations of this tale — such as “Ever After,” Disney’s TV movie adaptation “Cinderella” and Kenneth Branagh’s live-action “Cinderella” — offered similarly enlightened, forward-thinking commentary, Cannon’s, for better and worse, is far more obtuse about its machinations. And while it’s a noble effort from a capable director, this glass slipper proves frustratingly ill-fitting.