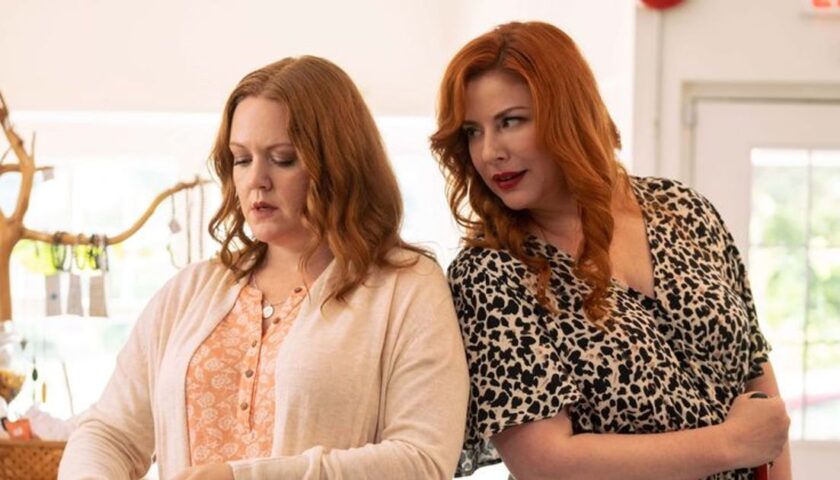 Lifetime’s ‘Circle of Deception’ certainly lives up to its name in one way. It does in fact go around in circles, so much so you’re left reeling at the end and not in a good way.

‘Circle of Deception’ is based on Ann Rule’s true crime book ‘Practice to Deceive’ based on the fascinating true story of former beauty queen Peggy Sue Thomas and her murderous boyfriend Jim Huden. The true story happened in the small island community of Whidbey,  which was turned upside down when a local businessman Russel Douglas was found dead on the day after Christmas.

So who could be behind his murder? Could it be his wife Brenna who just recently took out a restraining order against him and then revoked it or her best friend Peggy Sue who she has confided in about her emotionally abusive marriage or her best friend’s new boyfriend Jim who is bloodthirsty and trigger happy because of his dark past.

Well, with three angles to pursue, one wouldn’t think that this film would meander so much. Oxy addictions, sex toy fetishes, a suicide — all on top of a murder story — gets a bit too much to absorb after a point. It simply leads one to be less and less invested in what led to the actual murder of Russel Douglas.

Diane Neal plays Peggy Sue Thomas, a former beauty queen who constantly runs down her supposed best friend Brenna Douglas, played by Jill Morrison, for her weight and her loveless marriage to Russel Douglas. Peggy Sue tells Brenna that she can do so much better than Russell once she loses a few pounds, of course.

Why Brenna takes the advice of someone who talks to her as disrespectfully as Sue does is another one of the mysteries of this film, but not one we’re supposed to focus on. Peggy Sue Thomas also clearly doesn’t have the best idea of men to be in relationships with.

Soon after Sue gets involved with her new boyfriend Jim played by Tahmoh Peniket she asks him what he dreams about and he says killing someone. Well, that would be a red flag for anyone but for some reason, Sue just laughs it off. Later on yet another red flag is raised when Peggy Sue’s half-sister complains about her husband and Jim asks if he can “take him out”.

Finally, Peggy Sue realizes that something is amiss and confronts Jim about his violent tendencies. He then tells her that he’s not a psychopath, (always what you’d like to hear from your boyfriend) but he has a deep-seated need for revenge in life. This is because he saw his mother being constantly abused by his stepfather all throughout his life and has now led to him having a sense of murderous rage towards other abusers.

It is precisely this violent tendency that is activated when Jim overhears a conversation between Brenna and Peggy Sue where Brenna complains about her husband Russel being emotionally abusive. This then leads to Jim shooting Russel in broad daylight on Christmas Day.

Although Jim is the one who pulls the trigger, the question remains about just how responsible Peggy Sue Thomas is for the murder. It’s a question that persists in real life as well and will give you sleepless nights. Just how much did Peggy Sue actually push Jim to this act.

While Jim Huden as the film shows was sentenced to 80 years in jail, Peggy Sue Thomas finally agreed to a plea deal of four years for rendering criminal assistance in the first degree. She served her sentence at the Washington Correction Centre for Women and was released in 2016.