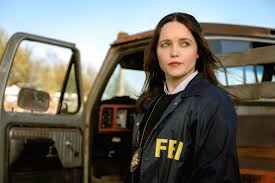 Clarice Starling gets a solo series spotlight on CBS in Alex Kurtzman and Jenny Lumet’s one-year-later sequel to Jonathan Demme’s ‘The Silence of the Lambs.’

I’m not sure any film or television franchise has generated a more wildly varied set of expectations than Thomas Harris’ psychological horror output.

When considering CBS’ new drama Clarice, is it fairer to compare it to Jonathan Demme’s Oscar-winning The Silence of the Lambs or to Ridley Scott’s infuriating big-screen sequel Hannibal? To Bryan Fuller’s operatic NBC drama Hannibal or to middling cinematic efforts like Brett Ratner’s Red Dragon? Bits and pieces of this brand have been pulled apart and stitched back together over the years with a persistence that serial killer Buffalo Bill might appreciate.

The bar for success is either extremely high or reassuringly low, so naturally Clarice ends up somewhere right in the middle. In Clarice Starling, creators Alex Kurtzman and Jenny Lumet have a character with ample untapped depths, and their approach to the trauma she endured by the end of Silence of the Lambs is admirably complex. But the series has a frustratingly hard time standing on its own two feet. Through three episodes sent to critics, it’s unclear whether this attempt to tell the story as a broadcast procedural with a full, serialized mystery arc will ever amount to anything more than a prehensile tail clinging to a beloved property.

Clarice begins one year after the events of Silence of the Lambs — specifically the movie — which partially explains why it’s set in 1993 and why Clarice’s PTSD flashbacks from her experiences with Buffalo Bill look so much like Demme’s cinematic climax. Clarice is a tabloid darling and probably the FBI’s most recognizable agent, but she’s been tucked away in the dark recesses of the Behavioral Sciences Unit, attending regular sessions with a therapist (Shawn Doyle) — a character very much in the film’s mold of snide male authority figures who look down on her and think they can control her.

Keeping the period setting allows Clarice to feature broad beats of institutional sexism, still fully recognizable even 27 years later. It captures a snapshot of somewhat retro attitudes toward serial killers and mental health; it’s a little jarring when characters in Clarice act, for example, as if autism isn’t a part of common conversation. But keeping the story in the ’90s enables the show to avoid playing like a mere remake of Criminal Minds, so bless them for that; if Clarice Starling could just pull out her cellphone to do research, she wouldn’t be Clarice Starling. Kurtzman and Lumet have the good sense to remember that, unlike Hannibal/Red Dragon protagonist Will Graham, Clarice doesn’t have a preternaturally intuitive way of viewing the world. She’s simply damn smart.

Clarice is also young. She was plucked out of the training course at Quantico, and whatever her fame may be, she’s only been on one case. So the premise of the new series involves her being summoned by Ruth Martin (Jayne Atkinson), a senator in Silence of the Lambs and now attorney general, to work with a violent crimes task force responding to two women found murdered in a ritualistic fashion suggesting a possible serial killer. The team is headed by Paul Krendler (Michael Cudlitz), who you probably don’t remember sneering at Clarice in Lambs, and features specialists played by Lucca De Oliveira, Nick Sandow and Kal Penn.

Clarice is trying to put what happened in Silence of the Lambs behind her, but the storytellers remain tethered to the beloved property, or as tethered as they can be. In addition to Krendler, Ruth Martin and her daughter Catherine (Marnee Carpenter), the only other Buffalo Bill survivor, the series brings back Ardelia (Devyn A. Tyler), the Quantico chum played by Kasi Lemmons in the movie. You’ve got the flashbacks, which involve Buffalo Bill’s subterranean well and those terrifying death’s head moths. Characters reference and tease things that suggest that they, too, must have recently watched the movie.

Heck, Catherine Martin’s dog Precious is a part of the new series. It all seems intended to distract you from the fact that not only is Hannibal Lecter not part of Clarice, they don’t even have the rights to say his name. One not-particularly-subtle reference to how Clarice’s “last therapist was an inmate in the Baltimore Hospital for the Criminally Insane who, you know, ate his patients” is all you get and even that may be too much.

Lacking the ability to even name-check Dr. Lecter — who theoretically is on the loose and either should go completely unmentioned or should be all anybody wants to talk about with Clarice — the series isn’t taking sufficient advantage of the need or opportunity to stand alone. The case Clarice has been thrust into features dead women and bite marks; in other words, it’s different-but-similar to the last case. Any momentum from the pilot gets squandered in a second episode that’s a close-ended CBS procedural hour, albeit one referencing aspects of Clarice’s backstory previously established in the movie. There’s creepiness, without a mystery intriguing enough to make us look forward rather than backward. It’s thankfully less exploitative than your average episode of Criminal Minds — Silence of the Lambs is distinguished by its sublime awareness of the voyeuristic aspects of the genre — but less visceral than you might expect from an FX or HBO drama.

The early Clarice episodes are directed by veterans of Kurtzman’s CBS All Access Star Trek stable, starting with Maja Vrvilo, and the aesthetic is broadcast-standard handsome gloominess. There are lots of dark basements and murky tunnels, reflections in puddles and rivers, and jarring flashbulb edits, but nary an image that comes close to Tak Fujimoto’s Lambs work or the delicious, hyper-stylized cinematographic nightmare that was TV’s Hannibal.

There’s just too much near-emulation going on, which carries over to the cast. From the set of her jaw to the tightness of her lips to the probing intensity of her gaze, Breeds leaves no doubt that she studied Jodie Foster’s Clarice; even her accent is an impression of Jodie Foster’s impression of a West Virginia accent rather than the thing itself. This is a very good imitation of a preexisting take on the character, a predictable trap that befell no less than Julianne Moore when she tackled the role.

Naturally, the performances in Clarice that stand out are the ones less indebted to the movie or those that are entirely original. Cudlitz’s Krendler has shades of all the men who overlook or actively denigrate Clarice and just enough concerned, potentially caring mentor-ishness to make you hope that their relationship progresses quickly. As the most immediately developed member of the team, De Oliveira has a welcome quiet sensitivity. Several guest actors, including Doyle as a shrink with a reptilian certainty that he can crack Clarice, and Tim Guinee, humanizing a slippery cult leader in the second episode, impress as well.

What keeps Clarice only slightly disappointing instead of infuriating is that Kurtzman, Lumet and Breed really do have a solid grasp on Clarice Starling as a character and even some thoughtful ideas about how the events of Silence of the Lambs impacted her. Perhaps three episodes is insufficient time for Clarice to assert its own voice and find its own rhythm, but if you tackle an iconic property on broadcast TV, you face week-to-week judgment.