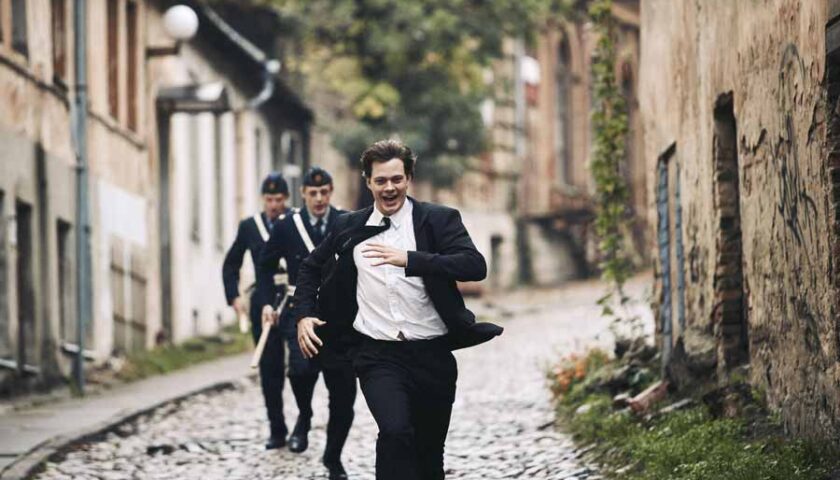 The limited series Clark is based on the “truths and lies” from the real life Olofsson’s biography. We go from his birth in 1947, where we pan into his mother-in-labor’s uterus to see Clark as a fetus. “I didn’t like being told what to do,” says the voice of an adult Clark (Bill Skarsgård), “so I stayed in there as long as I could, but it was time.”

As we see Clark growing up, he describes all manner of shenanigans that he’s gotten into, most of it illegal. “I never did an honest day’s work, but always had money,” he says. Because he was a kid, he always got time in juvenile detention, but it was never a deterrent to him. By the time he’s 18, he’s stealing, partying and having lots and lots of sex.

After an auto accident where he literally came back from the dead — the car was stolen and he had punched a cop — Clark and his buddies escape from juvie and go to the beach, where Clark meets a wealthy single mom named Liz (Malin Levanon) and her daughter Madorie, nicknamed “Madu” (Isabelle Grill). He lies his way into staying with them, taking Madu’s virginity and having wild sex with Liz.

He then plans a big heist with his buddy Gunnar (Emil Algpeus). But after robbing a sporting goods store to get supplies, the police catch them in the act; Gunnar panics and shoots one of the cops. Now he’s a cop killer, and even though he’s on the run, he takes the time to stop and apologize to Madu, whom he claims is the first love of his life, for lying. She surprisingly stays by his side, even after he’s caught by police detective Tommy Lindström (Vilhelm Blomgren).

Produced and directed by Jonas Åkerlund, Clark treats its subject with the right amount of reverence and irreverence. Most of the time, Clark’s exploits are treated as the lark they are. Yes, he’s not exactly perpetrating victimless crimes, but the crimes are petty for the most part, and he seems to treat his punishments with a shrugging acknowledgement that it’s the cost of doing business as a delinquent.

Olofsson was involved in the 1973 bank robbery where the term “Stockholm syndrome” was first coined; we’re not sure if his charms were part of the reason why the hostages in that case defended their captors or not. But after watching the first episode, it wouldn’t be a stretch to think that.

Åkerlund is positioning Clark as a sympathetic figure, despite the fact that he takes advantage of everyone he meets, and in shows like this, creators sometimes cross the fine line to making the criminal look like too much of a hero. We’re satisfied so far that Clark is being shown for the mostly bad guy he was, albeit one that can seem to charm his way into the heart of someone like Madou.

As we see more of Clark’s exploits through the decades, and Lindström’s pursuit, we’ll see if Clark becomes more of a hero or not. Given that the show is based on Clark’s own exaggerated stories, we’re hoping that the hero worship stays at the levels the show is at now.