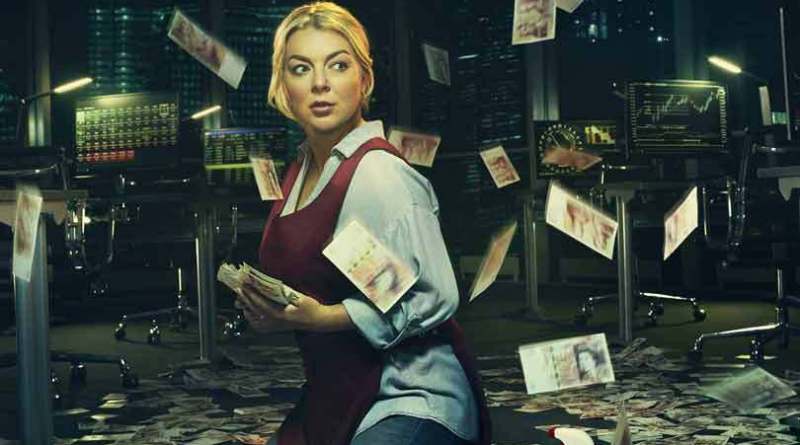 Review: In Cleaning Up, the ever-dependable Sheridan Smith plays a hardscrabble working-class single mother living under a mountain of debt. Her name is Sam, and you’ve met her type before. She’s a mother of two girls and the oldest, a sassy 15-year old played by Kristy Philipps, has started acting out. Her fed-up ex (Matthew McNulty) wants full custody of both, in part because Sam is working a zero hours contract with no long-term prospects, and also because she’s quite clearly a gambling addict.

The rattle and clank of Sam’s roulette app provides the accompanying soundtrack as she cleans up after wealthy traders in the glass and steel monoliths of the financial district. But that zero hours contract might hold the secret to striking it big and keeping the debt collectors from the door. With her similarly put-upon bestie Jess (Jade Anouka), Sam hatches a scheme to start insider trading by bugging the office of a snooty broker (Doc Brown) who is always in the office after-hours.

In some sense Cleaning Up is like a modern reimagining of Robin Hood, only the Sheriff of Nottingham is here not a singular figure but big-business writ large; Sam doesn’t feel it’s fair that the already wealthy get to line their pockets while berating her for not cleaning the ring marks off their desks, and you’re supposed to be behind her all the way. But the biggest hiccup of the first-time script from Mark Marlow is that it doesn’t make Sam quite sympathetic enough. She seems the architect of her own misfortune, and in a scene early on when she crashes into another car and flees the scene while giggling, she isn’t too concerned with anyone else’s, either.

The antidote to this is Sheridan Smith, who could play a struggling single-mother in her sleep, and also a nudge-nudge, wink-wink element to the writing that suggests Cleaning Up doesn’t take itself particularly seriously. At one point Sam moves the girls into the same room and gets a lodger (Robert Emms) who just so happens to be a dorky tech whizz who can fix her cheap surveillance equipment. There are a bunch of moments like that which suggest a slightly smarter show than I’m giving Cleaning Up credit for being, much like how an on-the-nose domestic moment suggests Sam is a lot better with numbers than you’d expect of a cleaner.

It’s fun, and it’s likable, and the potential is there for things to go almost anywhere, even though there don’t seem to be any specific perils on the horizon (except, you know, ten years in prison.) With five more episodes to go its pointless guessing, but fittingly Cleaning Up has a one-more-go quality, like the casino games that swallow Sam’s dough quicker than she can make it. I’ll be at the table next week. I hope I strike it lucky.