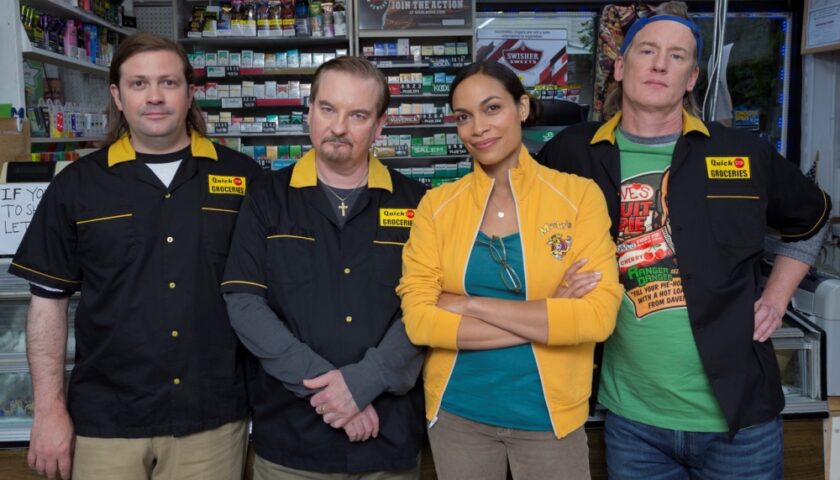 If you were tasked with describing Kevin Smith to an alien who had never heard of him (and you were prohibited from using the word “jorts”), you might start by saying that he’s a highly intelligent man who smokes far too much weed. A gifted filmmaker who has been known to show flashes of brilliance, Smith has nevertheless earned his living by making stoner comedies about (and largely for) manchildren who love dick jokes. For better or worse, he’s far more recognizable for lines like “snoochie boochies” than he is for the Samuel Beckett references he used to drop into his films.

At his best, Smith uses that stoner sensibility for texture, creating an absurdist backdrop for his relatively normal protagonists as they confront challenging problems with no easy answers. At his worst, he gets stoned behind the wheel and churns out inane drivel that appears to be aimed exclusively at 37-year-olds who sleep on a futon in their wife’s boyfriend’s basement.

Both versions of Smith show up in “Clerks III,” though fortunately there’s enough of the former to make up for a rough first act dominated by the latter. His new sequel contains as much blatant fan service as you might expect, and some of it is probably even worse than what you’re imagining, but the film eventually finds its footing by making (and committing to) some legitimately bold choices. To put things in terms that Dante and Randal would understand, “Clerks III” goes in like “The Force Awakens” and out like “The Last Jedi.”

When we last saw Dante and Randal at the end of “Clerks II” (major 2006 spoilers incoming), they left their lives in fast food purgatory to purchase and reopen the Quick Stop grocery store that they once despised working in. If “Clerks” was a film about taking initiative to improve your life, “Clerks II” was about accepting that what you had in the first place was already pretty great. Solid advice, but fast forward 16 years and it starts to wear out its usefulness.

When Randal suffers a heart attack at work that almost kills him, it occurs to him that he could have done more with his life than hang out at a convenience store talking about movies with his best friend. That lifestyle leads to a lot of fun days, but it doesn’t make for much of an obituary. Faced with an overwhelming desire to do something productive and the realization that all he knows about is movies, he decides to make his own film about life at the Quick Stop. And it just happens to feature a scene where people play hockey on the roof. And shutters that won’t open because gum is stuck in the lock. And a drug dealer who hangs outside the store with his mute friend…

Yes, “Clerks III” is about the characters from “Clerks” making “Clerks.” Although they wisely avoid rupturing the space-time continuum by naming their film “Inconvenience,” much of “Clerks III” consists of watching meticulous recreations of famous scenes. All of the famous anecdotes from the unorthodox shoot (like Smith writing about the shutters being jammed to hide the fact that they filmed at night or scrapping an original ending about Dante being killed by a robber) make it into the film, and Smith’s voice is so present in each character that it essentially feels like you’re watching a director’s commentary track. And the story of the making of “Clerks” is indeed a remarkable one, even if everyone who is interested in it has almost certainly heard Smith tell it on countless podcasts.

But perhaps that’s the point. One constant throughout Smith’s career is his tendency to believe that every life event is worth documenting. He became an indie film legend by betting that his real-life job at the Quick Stop could be gripping cinema. And he was an early adopter of podcasting, turning his conversations about “Star Wars” and comic books into an audio empire. As he gets older and more sentimental, the outspoken filmmaker has made no secret of the fact that his ethos essentially boils down to “just make stuff.” So it’s hardly surprising that he would eventually make a movie about two of the most pivotal events in his life: the making of “Clerks” and the heart attack that almost killed him. It was inevitable that a man who built a career out of documenting the mundane would eventually want to document the documenting.

And believe it or not, Smith does have some interesting things to say about that. The film succeeds when it steers into darker territory, showing Dante and Randal as they grapple with the fact that a silly movie about a convenience store is everything they have to show for their time on Earth. Smith incorporates footage from the original “Clerks” into a surprisingly touching dream sequence that explores how even the most lowbrow art can take on outsized sentimental meaning in the lives of its viewers and creators. In between all of the cringe humor, Smith does an extremely convincing job of reminding us that his career mattered.

While Smith has always been a slightly better filmmaker than he gets credit for, his real draw was always his unique point of view. His early films excel at capturing the perspective of the cynical pop culture snob, the kids who think they’re smarter than everyone despite being losers in every sense of the word that matters. It was probably inevitable that once he became a winner, his films got a lot less interesting (the excellent “Tusk” notwithstanding). Somewhere along the way he traded cynicism for dad-like sincerity, so it was unreasonable to expect his three-quel to pack the punch of “Clerks” (or even “Clerks II,” for that matter).

“Clerks III” is a trip down memory lane, a very sentimental director taking a victory lap at his viewers’ expense. Make no mistake, the film is frequently weighed down by a series of weed jokes, meta gags, and other comedic misfires (a sequence where Randall banters about the size of his penis with the heart surgeon who is operating on him is particularly grating). But devotees of Smith and his View Askewniverse will likely delight in the tribute he made to his own masterpiece, even if the main emotion it evokes is a strong desire to rewatch “Clerks.”