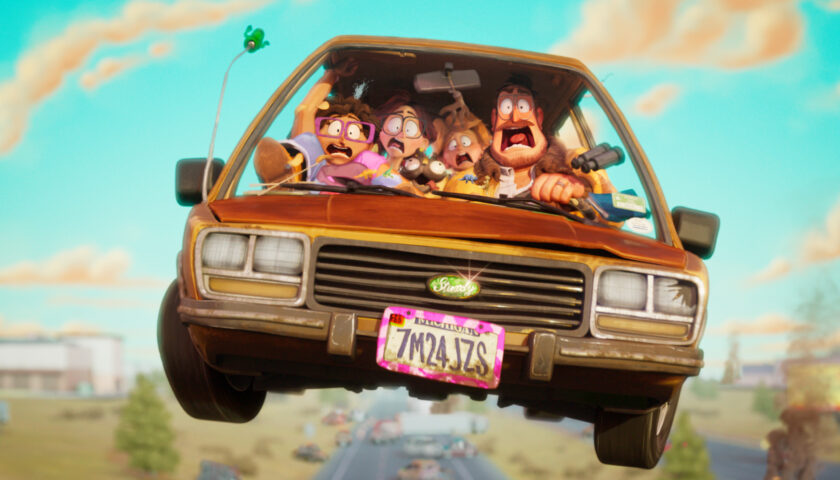 When Pixar launched Toy Story on the world, Disney suddenly looked like dinosaurs in comparison — not just because of those 3D graphics, but the creative storytelling smarts that came with them. It took over two decades for any other major mainstream animated movie to feel quite so revolutionary, but Spider-Man: Into The Spider-Verse — from powerhouse production duo Phil Lord and Christopher Miller, working with filmmakers Peter Ramsey, Rodney Rothman and Bob Persichetti — was an eye-sizzling superhero movie so sophisticated, it felt like it had beamed in from another universe altogether. Now, the Lord and Miller-produced The Mitchells Vs The Machines – teaming the pair up with writer-directors Michael Rianda and Jeff Rowe in another Sony Pictures Animation production – proves that was no fluke. These guys really are light-years ahead of the competition

As with Spider-Verse, it’s the visuals that hit you first, a dynamic blend of 2D and 3D textures — here adorned with an extra layer of cartoonish doodles that spill over from the characters’ thoughts and emotions, splashing across the screen — and action that’s both hyper-kinetic and hyper-cinematic. And as with that Spidey flick, its central concept feels unhindered by convention — a fancy way of saying its plot is, well, nuts. The titular Mitchells are a dysfunctional, Simpsons-esque nuclear family struggling to connect to each other in the world of modern technology (it was originally titled ‘Connected’ — not much better than its eventual lumpen moniker), forced to take down Pal, an evil Alexa-alike A.I. (a gleeful Olivia Colman) who’s enslaved humanity in floating cubes. Somehow, this combination of fizzing form and freewheeling function coheres perfectly — think the meta-explosion of Scott Pilgrim absorbed into the creative ingenuity of The LEGO Movie, with a Spider-Verse visual overhaul.

Like all those movies, it’s funny as hell too. Up there with the best of Lord and Miller’s projects, the gags fly at a rate of knots on a range of registers — visual punchlines, tiny asides that hit well above their weight, bonkers sequences packed with guffaws. A standout mid-movie mall set-piece with the Mitchells taking on a giant Pal-chipped Furby overlord — who screeches the original Furby noises and phrases like “LET THE DARK HARVEST BEGIN!” — is positively riotous. Frequent bursts of meme-style humour feel like a real leap forward from any other studio, while dovetailing with the film’s thematic interrogations of digital culture and online relationships versus real-life bonds.

Amid the chaos, The Mitchells Vs The Machines never loses sight of its emotional core — the fracturing relationship between the nest-flying Katie (Abbi Jacobson) and her loving dad Rick (Danny McBride). Throughout the runtime, Rianda and Rowe carve out space for delicately drawn father-daughter scenes — their perspectives on their changing family dynamic shown as equally valid but crucially misaligned. Nuanced, too, is its take on technology — that Rick sees it as a distraction, and budding moviemaker Katie sees it as a tool to unleash her creativity on the world feels far truer than any tired ‘phones-are-bad!’ polemic.

If there’s one missed opportunity, it’s to not make the clearly queer-coded Katie explicitly an LGBTQ+ character — but in every other regard it all adds up to the fastest, funniest, most futuristic animated adventure since, well, Spider-Verse. Your move, Pixar.