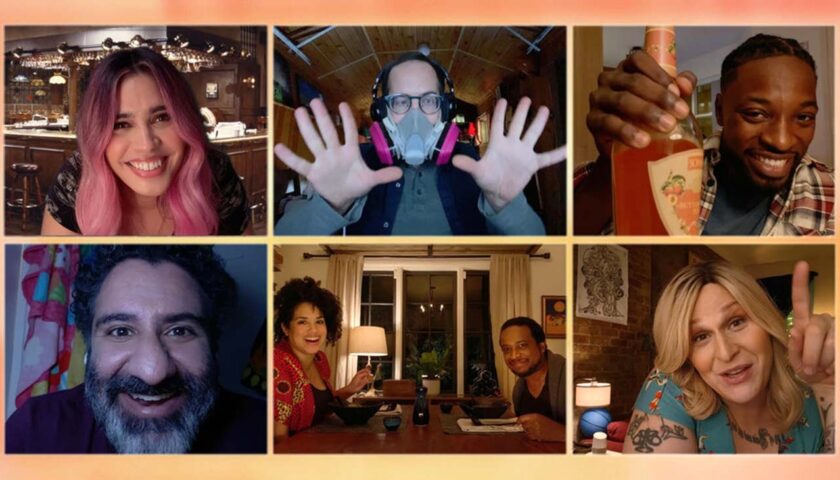 I thought it was okay, actually, and definitely don’t think it is as bad as other people say it is.

Whoever plays Pradeep is incredibly funny. I love his acting. Preacher Lawson is pretty good, and I do like that they have a lot of diversity on the show. Only one of the main cast members is white, which we need in television nowadays, especially as the leads. While this show won’t have many background characters based on its premise and format, it will be interesting and fun to see how these characters navigate through their struggles. Although we are reminded of terrible times through COVID-19, I could see this show being something viewed many years later down the road when people of younger generations want to get a glimpse of how we had it back then. Sure, we could tell future generations, but this show is more of a visual experience.

This show, actually, can work. The jokes are okay, especially the parents/kids one, but I will continue to watch in hopes that the characters build. With only seven characters, the writers have plenty of time to flesh them all out. There’s a possible storyline that, even outplayed as it is with someone really being into the other, but wants to express their true feelings and can’t, is interesting to see with different characters because the situations and reactions can be totally different. This is why Bob’s Burgers, despite being a generic animated sitcom, works so well. While it has the poor family aspect like the Simpsons, and the 3 kids and parents vibe, each character is clearly different, which brings different situations, character dynamics, and reactions.

We have to remember other hit sitcom shows like Brooklyn 99, The Office, Community, Modern Family, Bob’s Burgers, and Parks and Recreation didn’t start off well either, and considering that this show shows promise is a plus. Episodes about people just talking have been proven to work. Bojack Horseman’s “Free Churro” and Family Guy’s “Brian and Stewie” have just a few characters sitting down to talk for the whole episode. And these are considered the best of those said shows.

While Connecting has more characters in the first episode than those two examples, I just genuinely like episodes with raw emotions and dry humor. You can do a lot with just having to sit down and talk. It really brings a lot to the characters and that’s a plus in my book. Connecting really does well with that, and that’s its biggest strength. I hope there’s more to the show than COVID-19 though because that will make it really come out on top against its “shows about coronavirus” competition. The concept is unique, and pretty original, even if a lot of people don’t want this now. Sure we don’t need to be reminded COVID sucks, but I’m sure people will appreciate this down the road. The show has already been renewed for a second season, so this is at least worth an investment in hopes that it finds its legs by the end of season 1, leaving the viewer wanting more.