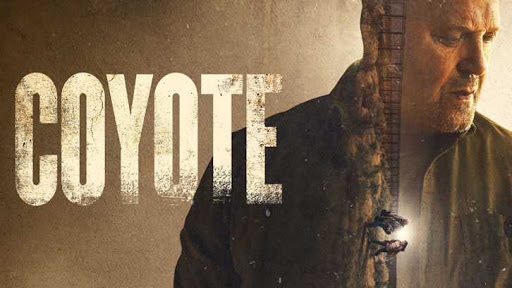 Throughout the first episode of “Coyote,” I kept waiting for a moment that might surprise me. Surely, I thought, this swashbuckling tale of a recently retired Border Patrol agent (Michael Chiklis) has more to offer than bursts of violence and basic platitudes about right and wrong. Surely, I hoped, there might be different layers to this series than meets the eye. And yet by the end of four episodes, no such moment came. Created by Michael Carnes, Josh Gilbert and showrunner David Graziano, “Coyote” sets itself up as an incisive character drama about a man who stumbles into a life and death situation that forces his black and white worldview to become gray. Instead, it comes off as a self-serious Western fantasy that’s more concerned with shocking its audience than making any sense.

The series — which premiered Jan. 7 on CBS All Access after originally being made for Paramount Network — stars executive producer Chiklis as Ben, a Border Patrol agent who retires in the pilot, much to his own frustration. It’s unclear why Ben is retiring, since he seems to love and understand his job more than most anything else in his life, but retire he does. Soon enough, though, he finds himself thrust into a high stakes escape from a dangerous Mexican cartel after a terrified woman (Emy Mena) climbs into his backseat and begs for help.

As we learn in sporadic flashbacks, Ben was hardly the most compassionate officer while on duty. In fact, as we learn in one particularly upsetting trip down memory lane, Ben is prone to shooting first and asking questions later to no real consequence. He’s rarely thought about the people he arrests as three-dimensional figures; he apparently never even learned more than a few scattered words in Spanish throughout his 32-year career. In the case of Maria, however, Ben recognizes that she’s about the same age as his daughter, thus activating some latent paternal instinct deep down. The series frames his willingness to help her as a compassionate turning point in his life, but fails to find much of interest therein. It barely fleshes out Maria’s character, nor that of Silvia (Adriana Paz), a Mexican local who sees something special in Ben that “Coyote” assumes the audiences will understand without giving any tangible reasons.

As played by Chiklis, a veteran actor of flawed TV authority figures, Ben’s rarely more than a blowhard who sees himself as the one true arbiter of justice. Maybe that appeals to some viewers, but to this one, watching Ben charge through every scene with righteous fists at the ready quickly becomes exhausting. No amount of sweeping coastline shots — and there are plenty, thanks to director Michelle Maclaren’s keen eye — can distract from the fact that this guy just isn’t smart or interesting enough to follow to hell and back, as “Coyote” otherwise requires.

It doesn’t help that the show’s structure is just as confusing as its protagonist. It opens with an in media res flash forward to a random cartel altercation and Ben trudging away from the border wall through the desert before cutting back “5 days later.” It then takes an episode and a half to reach that moment, before the show upends its own premise and throws Ben headlong into the insular politics of the cartel, headed up by its own cliché of a ruthless leader (played by Juan Pablo Roba). It’s one thing to show how quickly the ground can shift beneath Ben’s feet, and quite another for the series to constantly rewrite its own priorities.

To be blunt: a show that asks its audience to connect to a rogue Border Patrol agent with literal blood on his hands needs to work harder than this one does to justify its premise. As it stands, “Coyote” just feels like it was written by Ben himself while bored in retirement and itching for something more awesome to do than eat cereal alone and leave Home Depot parking lots without arresting anyone. It makes sense why he would see himself as the most fascinating person in his own story, but actually watching it unfold makes it difficult to agree.