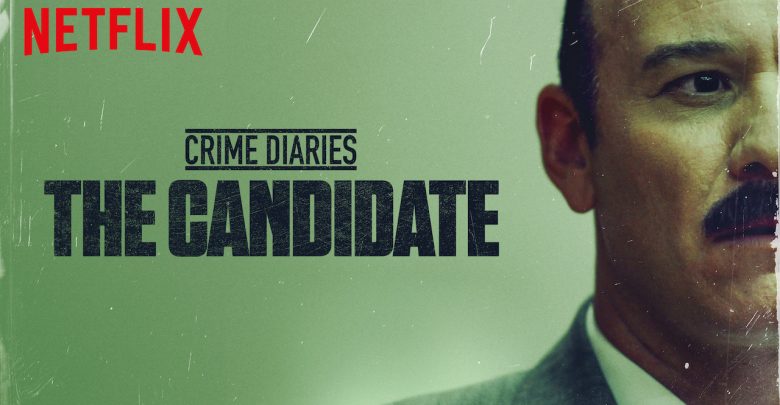 Review:In 1994 Mexico stood on the precipice of a new era. A potential turning point where the traditional model of political corruption threatened to be broken and a new kind of politician would step into the light and return power to the population. That was until Luis Donald Colosio was gunned down in broad daylight. Convinced that something rotten is at the core of the assassination a pair of detectives and the man’s widow investigate to unravel the truth.

Crime Diaries: The Candidate is a Netflix original series from first-time director Hiromi Kamata, whose second unit credits include Limitless and Vantage Point. For a first-time director, this is a remarkably accomplished series. It will be really interesting how she follows this effort and it would not be a surprise to see the Mexican director making her way to more high-profile projects soon.

At the start of each episode of The Candidate an information card appears to highlight that what is presented in this series is a fictionalized account of what might have happened surrounding the real-life murder of Presidential candidate Colosio. From what I could gather from a quick google, there were many aspects of the investigation into the killing that appeared to be suspicious and, whilst never concretely proven, there remains a considerable number of people who believe that Colosio’s murder was orchestrated by political rivals threatened by his pro-democracy platform. It is, however, important to point out that this is a dramatization of events and therefore one imagines that significant artistic license has been taken.

So, if it’s not a reliable historical artifact, how does it stand up as drama? Pretty well, as it happens. The first thing you notice is the use of real-life footage inter-cut with the drama. This has the effect of giving you a very real sense of time and space. You are immediately thrust into 1994 and there you stay. The set design and camera work here are all top notch and the show looks and feels like a Mexican version of Oliver Stone’s JFK,which I suspect would have been a key reference point for the production team of The Candidate.

The script is really well written. With its conspiracy theory overtones, it would have been very easy for the writers to feel the need to spell out in obvious terms that something fishy was going on. Whilst this is made clear to us, it is easy to imagine this done in a much more heavy-handed way in less skilled hands. Instead, The Candidate gives us the subtext we need through effective use of close-ups of shadowy looking politicians exchanging meaningful glances or grizzled detectives muttering under their breath as they uncover another layer to the corruption.

There is little here that we have not seen before. Fans of the genre may find this treading old ground, but it does very well indeed. Due to this being a subtitled Spanish-language production, the Candidate is unlikely to get anything like as much attention as it should, and that is a shame. If you can make time for this I am sure it will be worth your while.