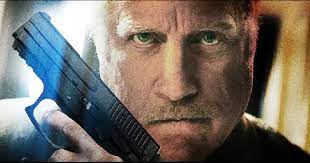 Worse things have happened to Oscar winners, but it’s still unfortunate to see both Richard Dreyfuss and Mira Sorvino flailing in the inept muddle of “Crime Story.” Playing a semi-estranged father and daughter thrown into crisis mode over a few hours’ course following a home robbery, the stars are not exactly at their best here.

But then the odds are sharply stacked against them, as writer-director Adam Lipsius’ film has the feel of an enterprise whose script wasn’t quite ready for “action!”: Half the dialogue sounds haplessly improvised, with sporadic voiceover narration coming off as an equally forlorn attempt to belatedly cohere a half-baked whole. Such things do not a taut crime thriller make, and “Story” (previously promoted as both “”The Last Job” and “Reckoning”) also fails as a rather maudlin dysfunctional-family drama, among other things. Saban Films is opening the feature in 10 U.S. cities this Friday, simultaneous with digital and on demand release.

A salvage-job feel descends immediately, as we’re introduced to Dreyfuss’ retired mob boss Ben Myers while emergency medical personnel attend to him in an ambulance. Their frantic shouts mix with his soundtracked inner thoughts to an unfocused effect not alleviated by back-to-back onscreen texts, one making the vague claim “Based on Actual Events,” the next “12 Hours Earlier.”

It is at that point that the story proper begins, with Ben shown tending senile wife Nan (Megan McFarland). Despite her obvious helplessness, and a suspicious van parked outside, he leaves her alone to visit the restaurant/bar he’s operated since going “legit.” After barking orders at longtime flunky Tommy (Pruitt Taylor Vince), he returns home. In his absence, the place has been ransacked, his hidden safe of loot emptied, though at least Nan seems to be fine. (She’s more upset when he mindlessly shoots his gun at the bedroom wall in rage, an action that brings a police visit.)

Surveillance footage provides Ben a clear view of the three perps who’d gained entrance claiming to be gas company employees. He then spends much of the day tracking them down individually, delivering a harsh justice that is frequently ludicrous. We might believe 69-but-strapping Liam Neeson when he tackles a goon, but too much suspension of disbelief is required as short, squat seventysomething Dreyfuss subdues men a fraction his age and twice his size — especially since we’ve already been told Ben is dying of leukemia.

Soon chasing this trail of violence is Sorvino as Ben’s daughter (by a prior relationship) Nicki aka Nick, a homicide-investigative cop now for some reason providing chief security for one Congressman Billings (D.W. Moffett) on the re-election campaign trail. She’s already solicited their erstwhile deadbeat dad’s help (to no avail) in doing something for the ne’er-do-well other daughter he’s fully estranged from (Joanna Walchuk as Sherry), whose own terminal illness will shortly orphan the grandsons he refuses to acknowledge. But dad’s crime spree becomes an even more pressing concern, the two major strands intersecting at last in a climactic shootout at a political rally.

“Crime Story” has some things on its mind, but as they are mostly buried in ill-articulated subplots (involving Billings and an immigrant family), it’s hard to know just what Lipsius is intending to say. For that matter, direction of the actors is so poor that at times we can’t tell whether particular characters are meant to appear mentally deficient or not. Some performers manage to maintain an aura of professional competence despite the material. Others aren’t so lucky.

Sorvino, in particular, seems bent on infusing the flimsy script with conviction by simply bursting into tears at every opportunity — a bizarre choice, since Nicki is supposed to be a tough cookie capable (we eventually learn) of some pretty coldblooded decisions. Dreyfuss is just miscast, his attempts at grounding Ben further undermined by that awful voiceover patter, which often runs toward meaningless drivel like “It’s so good to be doing something” and “Everybody chooses. But is it too late, for any of us?”

The dialogue is seldom much better, sometimes sounding made up on the spot (the actors’ what-am-I-doing-here expressions are a giveaway), culminating in a moment when two principals get this immortal, poker-faced exchange: “We’re dying on the inside.” “That’s life.” It is a measure of “Crime Story’s” cluelessness that those same figures, having betrayed each other every which way, nonetheless end the film in a tearful reconciliation hug.

The film at least looks good, though you might argue that DP John DeFazio’s handheld approach is a distraction, and that the warm color palette is a bit lush for a story that needed atmospheric grit. Other tech and design contributions are generally smooth, particularly in contrast to the haphazard content they frame. All three credited composers are in the fusion band Kneebody, and it is worth noting that a jazz-combo instrumental under the closing credits is better by far than anything “Crime Story” offers in the 95 minutes preceding it.