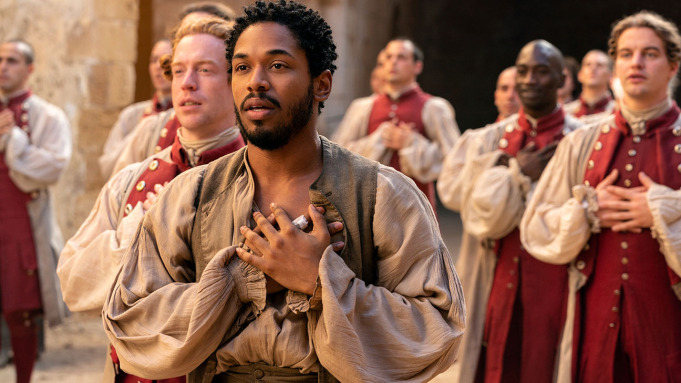 During the pandemic, director Joe Wright decided that what the world might need is a new musical version of Edmond Rostand’s classic 19th century poetic drama Cyrano de Bergerac. That may sound like an outlandish idea, but the movie version of Cyrano turns out to be one of the highlights of this year’s Telluride Film Festival. Beyond that, I think it is Wright’s best film, even though it has some problematic elements.

The idea of Cyrano as a musical is not new. In fact, this film is based on a stage musical that was presented at Goodspeed Opera House in Connecticut a few years ago. That show was written by Erica Schmidt (who also wrote the screenplay for the film) and starred Peter Dinklage (who is married to Schmidt) and Haley Bennett. The two stars reprise their roles in this big-screen version. (Dinklage appeared in the production alongside a different lead off-Broadway in 2019.)

It should also be noted that the character of Cyrano is one of the most enduring in all of world drama, and cinematic adaptations have been prominent as well. Jose Ferrer won an Oscar for playing the part in 1950. Gerard Depardieu starred in a celebrated French version in 1990, and Jean-Paul Belmondo, who died this week, starred in a French TV film of the play. And of course Steve Martin played a contemporary variation on the character in his acclaimed 1987 comedy, Roxanne.

Wright has chosen to set the film around the time that Rostand imagined, the late 17th century, and he has eliminated Cyrano’s famous nose, with Dinklage’s short stature providing a perfectly convincing variation on the theme. Wright has long had a taste for bringing classic literature to the screen. His breakthrough movie was an effective version of Pride and Prejudice, and he also presented a stylized version of Tolstoy’s Anna Karenina. Wright’s attempts to reimagine the classics grow out of genuine passion for the material rather than a lust for gimmickry.

The basic story hasn’t changed here. Cyrano is a wit and a master swordsman harboring unspoken and unrequited love for his childhood friend Roxanne. When Christian, a handsome soldier, joins the regiment, he and Roxanne fall in love, but Christian needs Cyrano’s help to craft the stirring romantic missives that Roxanne craves. When the two men are forced to go into battle, the story moves toward its tragic conclusion.

This is (thankfully) not an all-singing musical like the recent Annette. The songs by Bryce and Aaron Dessner, with lyrics by Matt Berninger and Carin Besser, never overwhelm the humor or the drama. Some of the songs are likable, and some are forgettable. Fortunately, the magnetic Bennett has a lovely singing voice that helps to sock the romantic ballads home. Dinklage once again confirms his charisma, vigor and versatility. Some of the best musical numbers do not involve the main characters. The always reliable Ben Mendelsohn, as the villainous De Guiche, delivers a musical manifesto that is quite compelling. The best song of all consists of a series of letters written by soldiers on the eve of battle.

Kelvin Harrison Jr, who plays Christian, proved his acting chops in the underrated Waves and several other films. He is certainly handsome enough to make a convincing object of Roxanne’s affections. And he also has a strong singing voice. By this point in time, colorblind casting is universally and rightly accepted in theater as well as film. Yet something is off in this reimagining. The character of Christian is essentially a good-looking, good-hearted lummox. That is the way Rick Rossovich played him in Steve Martin’s Roxanne. Casting a Black actor in the part, with a predominantly white cast, creates some discomfort that the filmmakers may not have fully considered. For the essence of the story is that Christian needs Cyrano to write articulate, eloquent love letters that he is incapable of composing himself. And when we have a desperately tongue-tied Black Christian turning for help to a brilliant white Cyrano, the dynamic cannot help making us slightly uneasy.

Viewers can debate this casting and are free to come to different conclusions. The important point is that the charm and poignancy of the original text survive. And Wright’s technical achievements are worth saluting. He shot the entire movie in Sicily, and the sets and costumes are stunning. Perhaps the most astonishing visual achievement lies in the wintry battle scenes filmed against the imposing backdrop of Mount Etna. These vignettes must rank among the most vivid scenes of war ever filmed.

Finally, the romantic conclusion of the play — the scene when Roxanne recognizes Cyrano’s love for her and affirms her love for him — packs an emotional wallop that only confirms why this story has endured and transported audiences for well over a century. Dinklage and Bennett score a triumph in this final scene that makes the whole movie soar.