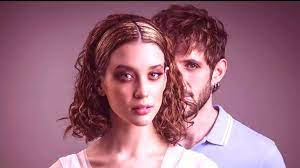 Dancing on Glass (Las Niñas de Cristal) is a Spanish-language Netflix Original YA drama directed by Jota Linares about two ballerinas in Spain’s premier dance company and the struggles they endure to reach perfection in their craft.

It can sometimes feel like if you’ve heard of just one story about ballerinas you’ve heard them all. Ballet is a grueling endeavor marred by unhealthy practices, abusive instructors, and monumental gatekeepers. It seems rare that the craft is portrayed in any other way, and perhaps with good reason. But even if so many of these stories go the same way, it doesn’t mean they can’t be filled with all the beauty, pain, and depth of ballet themselves. Dancing on Glass certainly tries its best to fill itself with each of those. In many ways, it succeeds. But in the end, it comes up just short, tiptoeing over glass rather than truly stepping into it.

Irene (María Pedraza) is unexpectedly called to play the prima ballerina role in Giselle, the opportunity of a lifetime, shortly after the apparent suicide of the company’s lead, Mária, which shockingly opens the film. Aurora (Paula Losada) is a recent addition to the company who, more than anything, is just grateful to be there. The two quickly bond, very intimately, over their feeling outcast from the rest of the company and their similarly frayed relationships with their parents. Their bond elevates their performance and their sense of comfort and security in a world that so otherwise puts them down for not being skinny enough or not working hard enough or not seeming passionate enough.

Mona Martínez plays the director of the troupe, Norma, to perfection. She’s a character who you instantly loath for how harsh and stereotypically insensitive she is as a ballet director but empathize with her just as easily whenever her personality is able to deviate from the script. Same with both Irene and Aurora’s mothers, played by Ana Wagener and Marta Hazas respectively. Both mothers oscillate between absolutely infuriating and deeply understandable throughout the film.

Wagener has a particularly powerful scene towards the end of the movie that seals your perception of her and recognizes her acting prowess while Hazas is repeatedly given the space to show a manic but empty mother trying desperately to protect her inner child as much as her own child. Olivia Baglivi also plays a striking rival character in Ruth. She doesn’t have as much screentime as she deserves, but some of her moments both in dialogue and in dancing are among the strongest.

The trouble with Dancing on Glass is that it just tries to be too much at once. It’s a story of deep platonic love. It’s a story of two dysfunctional families. It’s a story about a suicide and about a ballet director who may be culpable. It’s also about jealousy, rage, pain, passion, and lament. And still, it’s about power, pressure, and isolation in the world of ballet just as well as it’s about the follies of young people and their relationships as they hinge upon their abilities to communicate how they actually feel. It’s so much rich opportunity wrapped inside a film filled with beautiful ballet. And it’s just too much in the end. Like its subjects, the impact of the movie crumbles under its own weight while trying to be too much all at once that it forgets what it’s about at its core.

The imagery of dancing on glass is not in its original Spanish title, Las Niñas de Cristal, which is more of a reflection of Irene and Aurora’s shared fantasy world where they recede when they crave dancing but need to feel protected from the pressures of their profession. However, the English title offers the perfect analogy for where the film’s potential and its shortcomings lay.

Dancing on glass is dangerous, painful, and completely foolish, yet, it is a perfect romanticization of the pain ballerinas endure for the beauty of their craft. Dancing on Glass walks right up to that glass, bearing all of the dangers and titillation of something so provocative. But then it tiptoes its way around the sharp edges rather than stepping fully over them, leaving you only partially satisfied as what could have been lays obviously before you.

For all the depth that the characters and plot Dancing on Glass bring to bear, it simply doesn’t fulfill its potential. There are some truly excellent individual character moments for nearly the whole cast and the dance and its surrounding accouterment are very strong. But strong speeches, beautiful dance sequences, and several unexpected turns keep the pace of the movie fresh from beginning to end. Sadly, it’s not enough to satisfy all of the emotional strings that are set up throughout the first half. It’s an ultimately enjoyable movie, especially if you’re inclined to enjoy this genre of YA. But it falls short of its fullest potential as an emotional and deep examination of its central characters, of family dynamics, or of the world of ballet.

Dancing on Glass is streaming now on Netflix.