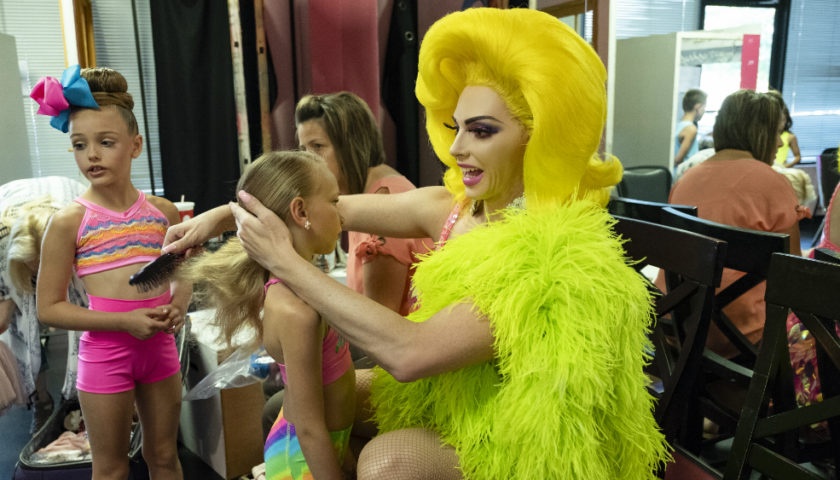 Review:  “Dancing Queen” is a title in search of a story, and there’s no story that could possibly better serve this epithet than one about a drag performer who runs a competitive dance school for children. Watching Netflix’s charming (if affected) new docuseries Dancing Queen, you can practically hear the pitch meeting in motion: “Think RuPaul’s Drag Race meets Dance Moms!” It probably also helps that the proposed star, country-fried drag queen Alyssa Edwards, was already a contestant on the fifth season of the VH1 competition series. Considering both reality shows are monster hits, the idea basically greenlights itself.

Edwards is the blonde and big-haired hellcat persona of Texan dance teacher Justin Johnson, a fey, flinty-voiced thirty-seven-year-old with skin so moonlit he practically glows silver. The two appear as separate entities on screen: Edwards sometimes addresses her alter ego during talking head interviews (“Justin, SHUT the hell up.”), but Johnson is the true star of the show. With his Dallas-meets-Jersey City lilted drawl, colorfully eccentric attire and — most importantly — trenchant survivor’s attitude, churchgoing Johnson commands the camera the way Edwards might rule a stage or a dancefloor. He owns your attention.

Set in his hometown of Mesquite, Texas, the series follows Johnson’s travails as the owner of Beyond Believe Dance Studio, a top southern dance school that enrolls toddlers and teenagers alike. He’s about to launch a traveling dance company cast with his students, so much of the plot revolves around the palaver of selecting and training young ingénues for this endeavor. This is where Dancing Queen begins to stumble: The emulous young girls and their caterwauling stage moms are frankly just too irritating to follow for long.

Johnson, having trained in the art of personification, can handle the artifice of reality TV; these other folks can’t. There’s always a certain stunted, hokey filmic language to “unscripted” television, but these girls and their moms too obviously reveal the cracks of being produced. They try desperately to foist themselves into archetypes: the Crazy Mom, the Fragile Dreamer, the Plucky Upstart. I wanted to fast-forward through their tedious, feigned drama about favoritism and harsh coaching to get back to Johnson. Dancing Queen invites you to gawk at a freak show, its attention to intergenerational provocation reminiscent of TV’s odious child beauty pageant trend from ten years ago. (I clearly don’t know how competitive dance works. Why aren’t these moms dropping their kids off and doing errands, like with Hebrew school??)

Dancing Queen is incandescent when the narrative focuses on Johnson’s personal journey — recounting a troubled childhood, buying his dream home, going on awkward dates. Here you see a vulnerability and gentility far from his trademark hollerin’ aphorisms. (“My high heels have done touched almost every inch of this world. Now I need my dance shoes to come and saddle up.”) The sequences where he publicly performs as Edwards pulse like music videos — as she dances and lipsyncs to thumping pop tunes, the giddy editing makes you bop along, too. Edwards is no Antebellum southern belle, but a brassy, acquisitive Suzanne Sugarbaker-style id — much like Johnson himself.

Netflix’s brand is chameleoning other network brands: Whether it’s a Hallmark-like romantic Christmas fairytale or an HBO-style drama about an irresistible bastard, their strategy is to squash and stretch and morph into its audience’s greatest viewing desire. I am not sure if Real Housewives-flavored Bravo is a good look here, but it may be worth holding your nose and splashing through the muck to get to Johnson’s performative realness.

Dancing Queen is the rare program that centers a gay, androgynous protagonist instead of sidelining him to a “Fairy Godmother” stock character. Like the “Magical Negro,” this wise and nurturing trope usually imparts humility or guides a straight character through a crisis – think Queer Eye, Dallas Buyers Club, etc. Johnson is a mentor to his girls, but the Ainsleys and Kianas of the world will never be able to upstage him on screen. Keep the mewling to a minimum and let the sovereign reign.