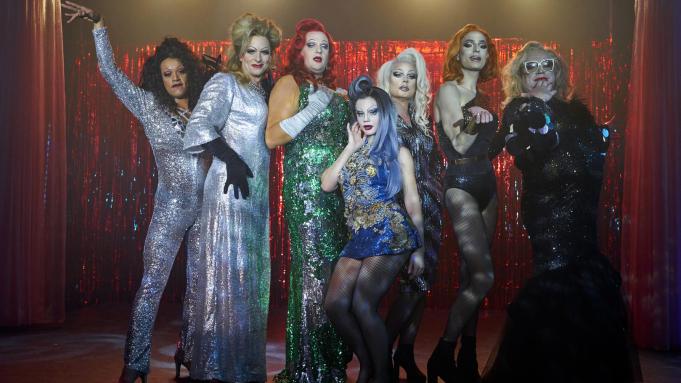 Dylan (Molly Nutley) lost her mother (Ellen Lindblad) a year and a half ago (or seventeen months ago, if you ask Dylan). She’s channeled her grief into being helpful; she makes grocery deliveries by boat for her dad’s store to different homes around their fishing village, and she teaches dance to local children. Her spirited grandmother (Marie Göranzon) pushes Dylan to return to her dreams of dancing professionally, dreams she let go when her dancer mother passed away. When Dylan finally gets the courage to audition for an international dance company, she finds that she’s a month late for the tryouts. Through a strange chain of events, she winds up with a job cleaning at a drag club called Queens. A chance encounter leads her to reveal her dance skills to the club’s very modern choreographer Victor (Fredrik Quiñones), who helps Dylan disguise her gender to bring some much-needed life to the company’s new show.

While Dylan lies about who she is to the queens at the club, she also lies to her grandmother and father that she’s still in the audition process for the dance company. It’s hard for her to juggle these lies on top of the painful grief she’s experiencing, and she’s not the only one hurting; at the club, old-school queen Tommy (Claes Malmberg) struggles with the loss of his own love and with letting go of campy ’70s dance numbers. With the future of the club in jeopardy, all of these dancers must put aside their differences to create something truly special… and Dylan must learn to live and love her life without her mother by her side.

As the grieving Tommy, Claes Malmberg immediately proves himself a scene-stealer. There’s a twinkle in his eye, a lovable quality to him that’s apparent with each little nod or gesture, or in his quiet moments where he speaks aloud to the late Jackie. His constant insisting to perform “I Will Survive” and his magnetic smile, whether in full drag or completely stripped down, make Tommy a sparkly, deeply memorable character from his very first appearance. It’s no wonder Malmberg has been working in Sweden so long.

Dancing Queens is an interesting little film. With an almost two-hour runtime, it’s certainly too long, but its heart is so big that it’s hard to fault it for most of its issues. The biggest issue the film has is its choice to use gay characters as secondary devices in a cisgender woman’s story. Dylan, played so sweetly by Molly Nutley, is a likable enough lead, but that’s kind of all she is. All we know about her is that she’s a grieving good girl who wants to dance, but can’t quite bring herself to following the loss of her mother. Her character really gets little else to do and never gets a chance to grow, which is a shame, because there’s definitely something interesting about growth and grief. But despite the film’s sweetness and best intentions, having a cisgender young woman disguise herself and lie to a group of drag queens who take pride in their safe space feels incredibly ill-advised. This isn’t to say that Dancing Queens maliciously sidelines its gay characters, but it’s kind of a bummer to see them relegated to stereotypical roles only really in place to support the story of its female lead.

Despite all my problems with the film’s central premise, I was totally charmed by the supporting cast. The queens at “Queens” are what make Dancing Queens worth watching at all, enriching the flick’s world with their (occasionally clichéd) stories and their undeniable chemistry with one another. The show-stopping scenes at Queens are really what give Dancing Queens any electricity at all, offering something genuinely memorable in a movie that otherwise plays it extremely safe. It’s such a shame that these players are so often made spectators in Dylan’s story. The loose ends may be tied up so well that it’s almost eye-roll inducing, but I never wanted to look away from the film’s ensemble. If only Dancing Queens understood where its real strength lies.