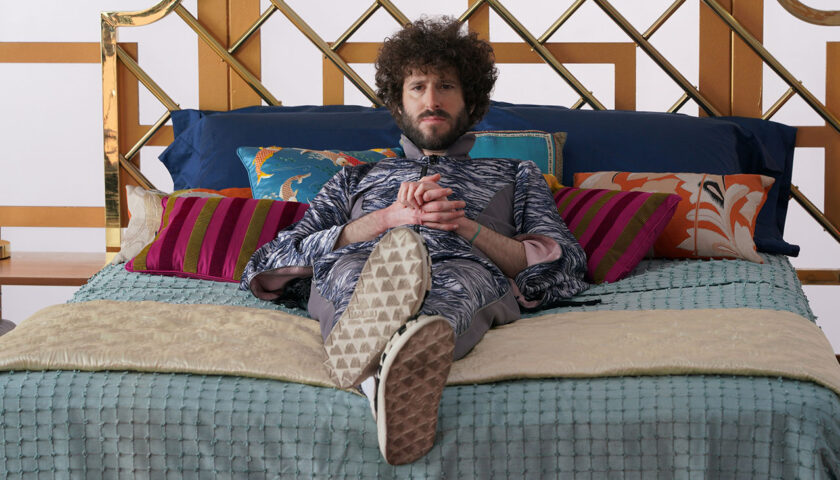 Imagine it’s early 2020. You’re walking down the street, and towering above you is the billboard for “Dave” Season 1 — the one where Dave Burd, aka Lil Dicky, is popping out of the fly. A passing pedestrian sees you staring and says, “In just a few years, that show is going to bring you to tears.” Would you chuckle? Ignore them? Look over your shoulder as you speed-walk away, making sure the weirdo isn’t following you?

Probably one of the three, and yet, here we are: It’s August 2021, and the finale of “Dave” is an exquisite closing number, keeping with Season 2’s overarching mission to check Dave’s privileged perspective, acknowledge the struggles of his oft-exploited friends, and push its characters, narrative, and formal ambitions forward in ways both hysterical and yes, moving.

To be fair, once you got past the marketing, the comedy co-created by Burd and Jeff Schaffer (“Curb Your Enthusiasm”) showed signs of promise. Early episodes topped expectations, and the FXX series grew stronger throughout Season 1, as great half-hour sitcoms often do. Individual episodes, moments, and choices stood out — from the pilot’s savvy use of music to acknowledging Dave’s rise to fame in a genre built by Black artists — all of which stoked excitement for a more consistent, cohesive, and creative future. Season 2 delivers, maintaining an upward trajectory while forcing Dave — and his audience — to wrestle with how his whiteness provides inherent advantages in his chosen line of work.

The end of Season 1 gave a taste of the kind of chaos that could come from Dave’s ego taking control, but he came to his senses instead of dropping a truly ill-advised song on live radio. Hurt by his breakup with Ally (Taylor Misiak) and desperate to prove himself as the real deal, Dave nearly let his machismo ruin everything. (Worth noting: During his improvised rap, Dave says, “I know I’m privileged– let’s not even go there.”) When Season 2 begins, he’s trapped between following predetermined paths to fame and the lingering doubt that those routes aren’t his to take. Mainly, Dave isn’t listening. Obsessed with delivering the perfect, chart-topping, critically revered debut album, Dave stops paying attention to his inner voice, his collaborators, and his friends. Now he can’t write. He has zero songs to fill an album with a release date fast approaching.

Stagnancy, creative or otherwise, can be a difficult topic to depict on television. But “Dave” smoothly pivots its stories to reflect how its lead’s singular focus is an indulgence not everyone can share, a recurring problem for the people around him, and, ultimately, a less rewarding path through life. It’s bad for Dave, sure, but it’s not always about him. As Season 2 progresses, the focus shifts to GaTa (played by GaTa, a professional hype man who started working with Lil Dicky in 2013), Elz (Travis Bennett), Emma (Christine Ko), Dave’s parents, Don (David Paymer) and Carol (Gina Hecht), as well as Doja Cat, playing a version of herself. Episodes 5-8 form a particularly stinging string of stories, that, as The New York Times’ chief television critic James Poniewozik perfectly put it: “actively engage his whiteness as an identity within a system of identities, not just a generic default that all other races are distinguished from.”

In Episode 5, “Bar Mitzvah,” Dave can blow off a private gig because he’s famous and well-off enough to forfeit a check for three times his normal rate (all because of a thoughtless beef he started). But the episode spends most of its time following GaTa, as he gets his car towed and wanders the unfriendly streets of L.A. trying to find it. When he does, he still shows up for the gig, and even though he’s not getting paid (thanks to Dave), he performs for the heartbroken partygoers: GaTa can’t afford to lose fans (or for Dave, his employer, to lose them), even if he literally can’t afford to be there either.

Episode 6 (“Somebody Date Me”) shows the gender gap separating Dave, a male rapper, and Doja Cat, a female rapper. After the two match up on a dating app, they start texting, and the episode ping-pongs between each of their respective work days. First thing, she’s bombarded with messages from her manager, social feeds, and publicist; she’s got to look pristine for an Instagram Live session filled with fans (and trolls, hunting for perceived flaws to call out); she’s got dance rehearsals for her tour, another social media broadcast, and a photo shoot, all before she has to run home, change yet again, and get ready to see Dave, who she’s made time to cleverly flirt with all day. It’s abundantly clear that what’s expected of Doja Cat is, at least, 10 times what’s required of Dave — whose idea of a full day is guesting in someone else’s rap video (and blowing off another match when he connects with the famous Doja) — and yet it’s Dave who feels ignored, lectures Doja on “dating etiquette,” and ruins things for them both. In his world, he’s the victim. In reality, he’s the problem.

The next two entries are worth their own lengthy breakdowns — I love the juxtaposition of past and present in “Ad Man,” especially when Emma makes her moves, and the ending of “The Burds” is as heartbreaking as it is honest — but we’re here to get into the finale, which manages to pull all these threads together, mainly through GaTa. Considering the impact the character has had on the series (“Hype Man” remains a fan favorite) as well as “Bar Mitzvah” boosting Season 2 to another level, it’s fitting that Dave’s oft-ignored No. 2 carries the ending’s emotional weight.

Much like “Bar Mitzvah,” Episode 10 sees a series of connected, escalating issues push GaTa to a breaking point. Even though GaTa is older, his mother lists their house in his sister’s name; hurt, he sells their “Friends and Family” passes to Dave’s album release party; when the party is canceled because of Dave’s hurt ego, he tries to make it up to the customer by bringing them to Dave’s VMA rehearsal, but Dave can’t be bothered to pose for a picture.

Unlike “Bar Mitzvah,” GaTa can’t solve this problem on his own, and the two soon have it out in GaTa’s family home. An argument over respect turns into a debate over money, as Dave can’t understand why GaTa would borrow $8,000 from him only to blow it on a BMW. “I gotta do what I gotta do to put myself on,” GaTa says. “I ain’t had no motherfucking bar mitzvah. I gotta fake it til I make it just like everybody else.” Despite the obvious truth behind those words, Dave can only hear it from his own perspective. “You don’t have to be like anybody else,” he says. “Hasn’t my career taught you anything?”

At this point, the two are shouting, and GaTa’s sister jumps in to ask Dave to keep it down. Both Dave and Davionte apologize, but that perfectly timed interruption may have saved the day. Dave lowers his voice, and soon, he starts to hear what GaTa is really saying. Here’s a guy who’s making his own music, on his own time, in his own closet, while Dave is “in a mansion rapping about writer’s block and ants.” All GaTa wants is to be heard, to perform, and to be seen as a fellow rapper by the man he shares a stage with. But Dave never even thought to include GaTa on a track, just like he never thought to consider Elz, Doja Cat, or his parents’ points of view before.

“You know what breaks my fucking heart?” GaTa says. “That you can’t even be happy without people telling you they give a fuck about you. And I’m the crazy one?” In that moment, you can almost hear Dave’s ears pop. But it isn’t clear how he’ll react until that night’s highly touted VMA performance. As Dave thanks Mike and Elz before going on, GaTa is in the dark, crying. Is he OK? Where is he? And is this the end of their rapper/hype man relationship? Their friendship? Then, in one exceptional shot by episode director Alma Har’el, we see GaTa wipe away the tears and put on his glasses, right as the platform under him rises into a spotlight, and suddenly he’s on stage, at the top of a staircase, walking down to meet Dave for their live duet.

What meaningful blocking. What a moving moment. And what a song! The new, shared track hits and their exuberant performance kills. Dave’s parents are all smiles, Emma is beaming with surprise, and soon we see Dave and GaTa performing to a packed house on tour, having the time of their lives. Elz is on stage, too, and it’s clear Dave is trying — like the song says — to make things good. The ending delivers on every conceivable level, but perhaps most importantly: You’re glad Dave finally started listening, but you’re actively happy for GaTa. That the finale can earn each sentiment is a testament to Burd, Schaffer, and the whole “Dave” team’s intricate planning and inspired execution. After a season-long ego trip reflective of lifelong entitlement, it would’ve been easy to just write Dave off; to let him be “canceled,” either via a very public blunder or privately, by the people in his life who’ve had enough. But that’s a less interesting arc, as well as a less useful one. It wouldn’t reflect the growth Dave is capable of or the growth “Dave” can inspire in its audience.

Season 2’s themes of acknowledgement and understanding seem to reflect a substantial change not only in Dave, the character, but perhaps Burd’s maturation (where it matters) as an artist. Four years ago, while watching Lil Dicky’s 11-minute music video “Pillow Talk,” it would’ve been easy to believe he could have his own show. The song recreates an awkward postcoital conversation, featuring Dave singing both parts and the future Ally, Taylor Misiak, playing his date. Computer-animated aliens, dinosaurs, and a walking brain all pop up, as the couple dodges contentious topics until their repeated disagreements end with him sleeping on the floor.

Looking back, there are roots of “Dave” in here: the music, the actors, the conversational tangents, the unexpected creatures (shout-out to the anteater in Episode 9). Like many of his songs, “Pillow Talk” features a relatable narrative enhanced by imaginative flourishes. But it also features Dave casually referring to his date as a bitch, touting his mental superiority, and generally dismissing her point of view. Even meant as satire, this kind of unflattering appropriation — where Lil Dicky’s demeanor seems to blend his “normal dude” persona with one of a popular, self-aggrandizing artist — doesn’t come across as the song’s intended message, so much as an oblivious byproduct of Lil Dicky’s mission to become a professional rapper.

“Dave,” though, is wholly deliberate. The character’s ignorance is calculated, time and again, to better illustrate selfless lessons. Anyone hesitant to commit to the series based on impressions made years ago can relax. The series isn’t a simple extension of his music videos, nor is it a one-man show, in front of or behind the camera. Insightful, open, attentive to its place in the world as well as its characters’ personal goals, Burd and Schaffer’s series manages to have it both ways: a bawdy comedy offering genuine, regular laughs and a shrewd schooling in awareness via an apt self-critique. Season 2 is loaded with stupid moments that are funny and pointed. Lil Dicky may not burst out of a crotch in the Season 2 finale, but there he is, back on a billboard, doing something that’s entirely self-serving and riotous in its lack of foresight.

“Dave” has come a long way. Maybe its creators saw the path all along, or maybe they figured things out as they went. Either way, it’s here now as one of TV’s best programs. Time to listen up.