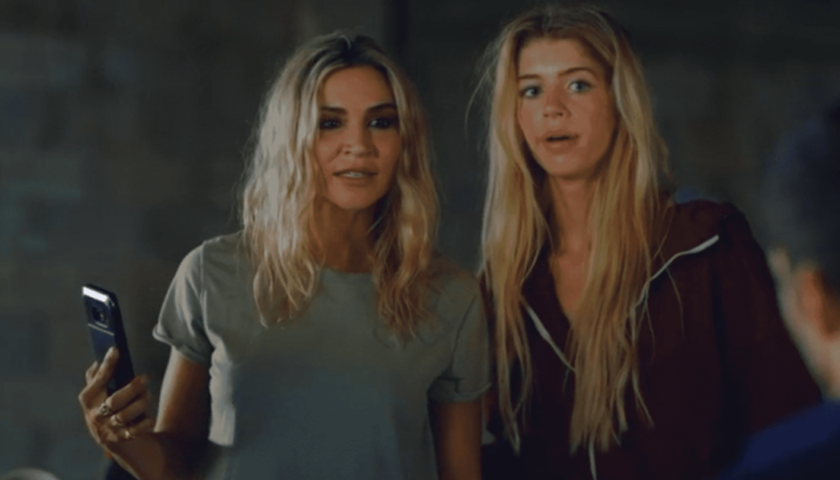 Having survived a kidnapping attempt in an international bride slave trade scheme, restaurateur Samantha McCarthy and her husband David ignore FBI warnings and visit Ft. Lauderdale, Florida, to support their daughter Ellie in a university volleyball tournament and enjoy a mini-holiday. Before they can enjoy the sites, the McCarthys are intercepted by the swarthy César Rodriguez and son Miguel who kidnap Samantha, David, and Ellie in an attempt to extort the missing $200,000 bridal delivery payment they accuse Samantha of funneling into her new Texas restaurant. Meanwhile, fugitive Ian LeBlanc, younger brother of the boat captain who previously abducted her, surfaces, dead-set on tracking down Ellie. (2021)

So we’ve got a sequel on our hands. A new clip recaps the previous movie in two seconds. It is a smart move, and I am totally caught up. Samantha and her daughter watch the news, and Ian (The bad guy from the first movie shows up.)

Flashback to Samantha and David running their successful restaurant when they get a call from Ellie. Ellie’s college volleyball team got into the finals and have an away game. David and Samatha decide to make a vacation of it and NOT tell Kyle, their taskforce officer, working the case. Ian is still out there, and they are in danger. (Not to mention Cesar and Miguel, who are also out to get the family for ruining their criminal ways.)

At the hotel, Samantha and David drink mojitos (or “salad water,” as Samantha calls it.) David gets a call from Kyle, who says that they might have a lead on where Ian is. He also jokingly scolds him for leaving town without telling him.

Ellie’s big game happens, and all the bad guys show up to watch from a distance. Then the family has a celebratory dinner, and Miguel and Cesar unexpectedly join it. Cesar pays for their bill, and the family starts to feel uneasy. They leave abruptly and plan to stay in the hotel room. (Well, Samantha wants to have fun!) They get into a fake hotel shuttle, and it is downhill from.

The driver laughs psychotically and drives around recklessly. When David calls Kyle on his cell phone, the man pulls out a gun and demands everyone give him their phones. They are taken to a shady location.

Miguel and Cesar are there and demand the $200,000 that has gone missing since the last movie Casar takes Samantha as a hostage in a beautiful condo and puts David and Ellie on a boat with Miguel. Miguel makes a move on Ellie. It is not the right time, dude. They are also locked in a hotel room.

The next morning all the hunks are shirtless, and I’m into it. Cesar takes Samantha to the bank to withdraw cash, and she asks for help from the bank manager. He knows who Cesar is and refuses to help her; he will transfer the money, though. She makes a run for it as soon as she can, but it is ultimately recaptured and punched in the face. (Ouch!)

Ellie is back on the boat getting sexually assaulted by Miguel, who is very interested in putting SPF 15 on her body.

Meanwhile, David is getting his ass kicked by a lady in the hotel room. Ian comes in hot with a shovel and saves him. Ian wants to help David get his family back safely, and they work together. (I’m liking this twist because Ian is super cute.)

Ian and David rescue Ellie from the boat. (David shoots like 20 bullets) Ellie is not trusting of Ian because he tried to kill her before. It is understandable! David wrestles with Miguel over a gun and is shot. Ian and Ellie drive away on a boat leaving presumably dead David on the shore. Ian takes this moment to ask Ellie out on a date. What is wrong with the men in this movie?

By comparison, Samantha has it pretty good. She is being wined and dined by Cesar. Sure she got punched in the face, but she gets really nice champagne! I think they might be honestly vibing. (Well, until Samantha grabs a knife and Cesar drugs her.)

Ian and Ellie save Samantha from Cesar. They come up with a plan to make an exchange of Cesar for David. Ian had the money all along, and Samantha screams at him to get it and give it back so this can all be over.

The drop-off doesn’t go as planned, and Samantha is re-kidnapped and taken away by a helicopter… driven by the FBI. She is saved and reunited with her family. (And Ian. Who is let off easy because the family ask Kyle from the FBI to take it easy on the kid. Umm that is not how that works.)

The movie ends with a volleyball game. Because that is what started all this. Miguel watches from a distance he plans to avenge his father and says “The girl in mine.” I’ll be on the look out for Deadly Excursion: Tokyo Drift!