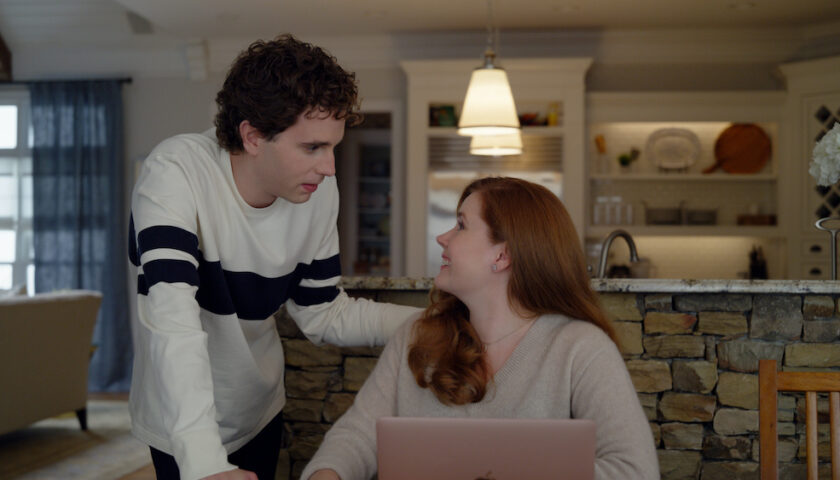 Dear Evan Hansen’s initial marketing campaign sparked a lot of discussion surrounding Ben Platt, who originated the eponymous role in the 2015 Broadway stage musical of the same name, playing a teenager well into his late 20s. To his credit, he’s not the first or the last person to do so in films or on television. However, Platt playing a high school senior is the least of the movie musical adaptation’s problems. Directed by Stephen Chbosky from a screenplay by Steven Levenson, who also wrote the play with music and lyrics by Benj Pasek and Justin Paul, Dear Evan Hansen goes for sincerity but it lacks awareness about its central character and has nothing interesting or deep to say about mental health.

Evan Hansen (Platt) has social anxiety disorder and is nervous about starting his senior year of high school. He doesn’t have any friends save for Jared (Nik Dodani), a “family friend” who feels like he has to hang out with Evan out of obligation. Evan likes Zoe Murphy (Kaitlyn Dever), but can’t get himself to talk to her. At the behest of his therapist and the encouragement of his hard-working mother Heidi (a wonderful Julianne Moore), Evan writes letters to himself about the ways in which his day will be a good one for him and why. Connor (Colton Ryan), Zoe’s brother, finds the letter and takes it with him after seeing Zoe’s name in it. He dies by suicide shortly thereafter. When Connor’s parents — Cynthia (Amy Adams) and Larry (Danny Pino) — show up at school wanting to talk to Evan about the letter, believing he and Connor were friends, Evan doesn’t correct them and continues on in the lie to get closer to Zoe.

There’s a deceitfulness that courses throughout Dear Evan Hansen. The way the beginning of the film is shot — with close-ups on Evan’s shaking hands, the pills in his bathroom cabinet, the way the camera lingers on him as he adjusts his hoodie and shifts his shoulders in a bid to fit in — that wants the audience to sympathize with him on a deep level. His actions and behavior throughout most of the film, however, make it difficult to do that. With every fiber of his being Evan wants to be noticed, to be able to go through life without feeling like an outsider; although one might forgive him for leaning into the lie that he and Connor were friends, if only to assuage the grieving Cynthia, it’s hard to ignore him taking matters into his own hands and crafting an entire story around it (including detailed emails) to emotionally manipulate the family for his own gain.

Of course, it’s one thing for Evan to do this and for the writing to recognize that he’s in the wrong. But Dear Evan Hansen fails to engage with its story in any meaningful way, portraying certain moments as heartwarming and tender when they are as fabricated and disingenuous as Evan’s con. Evan acts selfishly, only seeing the benefits for himself without realizing how he’s hurt anyone until it’s far too late, with the film often feeling like it’s using the state of the character’s mental health as an excuse for his actions (which have zero consequences). It’s ultimately the film’s lack of self-awareness with regards to Evan and the harm he causes others that will perhaps leave the audience cold. Where certain aspects of the story might have been ignored in the stage version, the film adaptation of the musical makes them even more pronounced and messy. Without further examination of its premise, the musical does itself a great disservice.

Chbosky’s directing is also uninspired. The music (which has its hits and misses lyrically) carries the movie, but there are only a couple of occasions when the filmmaking soars to the same heights. During “Forever,” Evan stands at the window for the majority of the number, with the Murphys sitting behind him, reacting with sorrow and surprise, but the stagnant direction doesn’t elevate the emotions of the scene at all. All told, the majority of the numbers are not as uplifting or as spirited as they are perhaps meant to be, with the musical adaptation often being tedious to watch. To be sure, Dear Evan Hansen has quite a talented cast and, while Platt can definitely sing and bring the emotion at the same time, the highlights of the movie are Moore and Amandla Stenberg as Alana, a student at Evan’s school who seems like she’s more put together despite also having social anxiety. Both actresses give emotional weight to their characters, bringing nuance to their roles despite their limited screen time, thoughtful in their performances.

The film also has nothing to say when it comes to mental health or social media. Evan uses Connor’s memory to make his life better, both online and off, and there’s a hint of how people can weaponize someone’s tragic death for their own benefit and the hollow, performative actions of the students in the aftermath of Connor’s death lean into that as well. However, it’s only Alana who seems genuinely interested in helping others. There’s ultimately little to no dissection of Evan’s actions and that’s what is most frustrating about the film. Like Evan, the musical emotionally manipulates its audience while trying to force heartfelt, tender moments where there are none, not really. Dear Evan Hansen might be well-meaning, but it completely misses the mark. It’s not the worst movie out this year, but it’s not a musical one might be inclined to rush to the theater to see, either.