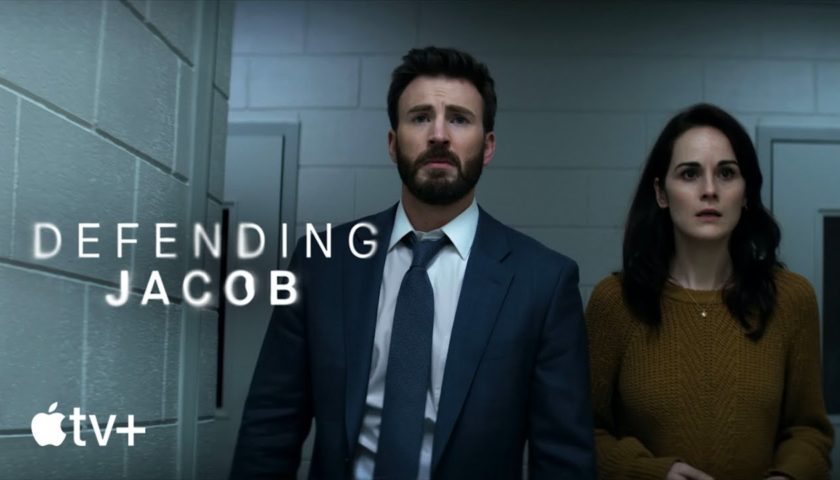 This is a whole different take on Murder Mystery which exudes a plethora of messages from consequences of less child limitations to society agenda. The show is slow paced which is the only complaint i have about it but the suspense, the story and performances make up for it. We’ve generally seen this genre from the point of view of police departments or usually some other type of investigator but not from the family itself or specifically the father.

That’s where Defending Jacob comes in. The story follows the life of a district attorney Andy Barber (played by Chris Evans) and a maternal teacher Laurie Barber (played by Michelle Dockery) whose son Jacob Barber (played by Jaeden Martell) is accused of murder. The show foreshadows the aftermath of an accused family resulting in an isolated, anti-social and rugged life.

This quote summarizes it, “Remember that in their eyes, it isn’t just Jacob who’s guilty. You all are.”

While the premise is interesting in itself, the fact that the father is a district attorney adds more depth and emotion to the story. Andy acted like the ultimate flag bearer whose stance was to remain positive even in these gloomy times but his role wasn’t solely as the father, his role was also to get to the bottom of things while working outside the law but will Andy subject to emotions or do his job a servant to the law? Take loyalty over honor? That’s the interesting choice, that’s the interesting and compelling aspect. Chris Evans totally delivers a masterful performance as Andy and a patriarch with many subtle movements expressing his emotions more than the dialogues does for him. I wouldn’t be surprised if he’s nominated for a limited series lead actor award.

Laurie is the most conflicted character in the show, she faces the damnation of the society being the mother and the vulnerable one. Dockery does an ideal job as the matriarch, her chemistry with Evans and Jaden is one to look forward to in this series. Now, I’ve never seen Downtown Abbey but her acting is regarded in those so if you liked her there, you will like her here. Also, she pulled off the American accent better than i thought, although it’s not a Bostonian one, she still gave it some nice effort.

Jacob is the most complex character. While we don’t know much about him, he is a pampered son (especially by his father) who’s hid many things from his parents but that’s something many children have done and that’s why they are a mystery to the world but are they? Is there a bigger picture of things or is it just something normal? Every episode leaves on a cliffhanger. Jaeden said this was the most worked up role he had and it shows.

I know that many people tell others to read the source material before watching an adaptation but this is the one case where they should watch the show because it would ruin the question behind whether Jacob is guilty or not? While Murder Mysteries sometimes have predictable judgement, this one doesn’t.

My other rating would be 4/5, it definitely lives up to the novel. I’ve heard that the show is a breakout for Apple TV+, it’s not shocking.