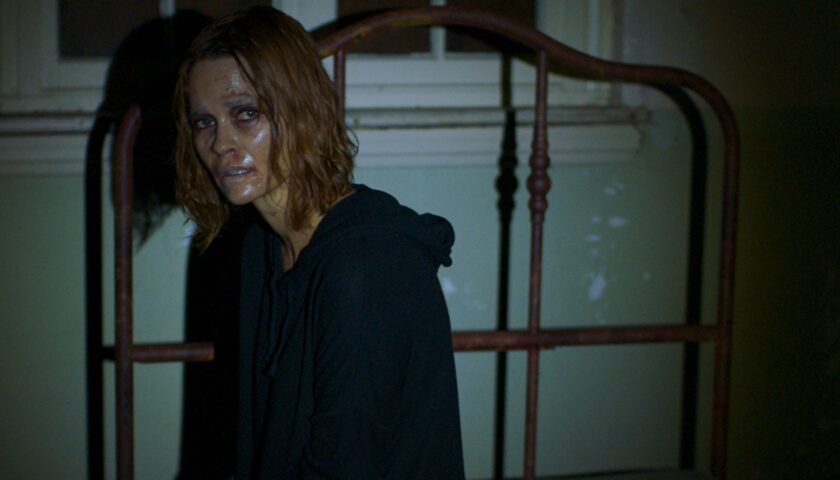 It’s been 12 years since South African Peter Jackson protégé Neill Blomkamp made a commercial and critical splash with District 9, an inventive melding of punchy sci-fi action, out-there humor and apartheid allegory. He graduated to star-driven Hollywood studio fare four years later, bringing socioeconomic commentary but less originality to Elysium, then took a goofy detour in 2015, his storytelling skills faltering as he considered the troubled collision of humanity with technology in Chappie. But even with lowered expectations, it’s disappointing that he returns after a six-year absence with the thoroughly humdrum horror of Demonic.

A cheapie shot during the pandemic with a no-name cast, the IFC Midnight release’s chief distinction is the unprecedented extent to which it uses new volumetric capture technology that turns actors into pixelated action figures. Meh. Given that the derivative horror scenes — think The Cell, with an undercooked dash of The Exorcist — take place inside immersive simulated environments, the movie needs no help distancing its audience from a fright-deprived scenario that’s like a videogame you never want to play.

With his background in 3D animation and visual effects, it’s easy to see why Blomkamp might geek out over a VR environment with a host-jumping demon on the loose and a climax viewed largely through a thermal camera headset. Those of us who like some visual texture with our satanic pandemonium will be less likely to find reward in this dismally generic B movie, with its flat pacing and scant emotional engagement.

Carly (Carly Pope) is already having vivid nightmares about her estranged mother when her old friend Martin (Chris William Martin) breaks a long silence to tell her of his participation in an unsettling medical study. A research group called Therapol contacted him with regard to Carly’s mother, Angela (Nathalie Boltt), purportedly one of a number of incarcerated felons brought in for examination from correctional facilities across the country. Convicted on multiple counts of murder carried out during a homicidal rampage, Angela has been in a coma since her self-harm and violent incidents led to a brain injury. In the simulations, she apparently has been asking for Carly.

Coaxed by Therapol chief physician Michael (Michael J. Rogers) and neuroscientist Daniel (Terry Chen), Carly reluctantly enters the labyrinth of her sleeping mother’s subconscious, not looking for anything beyond the opportunity to express her contempt. But closer access reveals it was not Angela who summoned her daughter but an entity that took control of her 20 years earlier. The simulations guide Carly to an abandoned sanatorium, supposedly built on haunted land, where her mother’s troubles began.

Disturbing visions soon start spilling over into Carly’s real life with visceral impact, prompting her to seek the help of Martin, whose seemingly crackpot theories about her mother’s meltdown caused her and their mutual friend Sam (Kandyse McClure) to cut him out of their lives years earlier. One key nugget of information he shares is the existence of a black-ops Vatican exorcism unit, under which the church has bought up medical facilities for hard-bodied priests to hunt down demons by luring them back to the scene of initial infection.

Blomkamp takes an unhurried approach to the setup that makes sense at first, but less so when the film keeps plodding ahead without picking up speed, rhythm or coherent logic. More dynamic use of Ola Strandh’s ambient score might have helped pump up the feeble atmosphere.

Even before Carly is presented with a 1,000-year-old Vatican relic called The Holy Lance to protect herself, the storytelling has become so ineffectual it’s more risible than frightening. The demon effects are passable, if mostly so blurred by the visual treatment that they make no impression. Pope acquits herself well enough in the lead role, but the attempt to add some heart by having her reconsider her anger toward her mother is too clumsily written to register, let alone represent a satisfying payoff. In the end, Demonic is all simulation, no real scares.