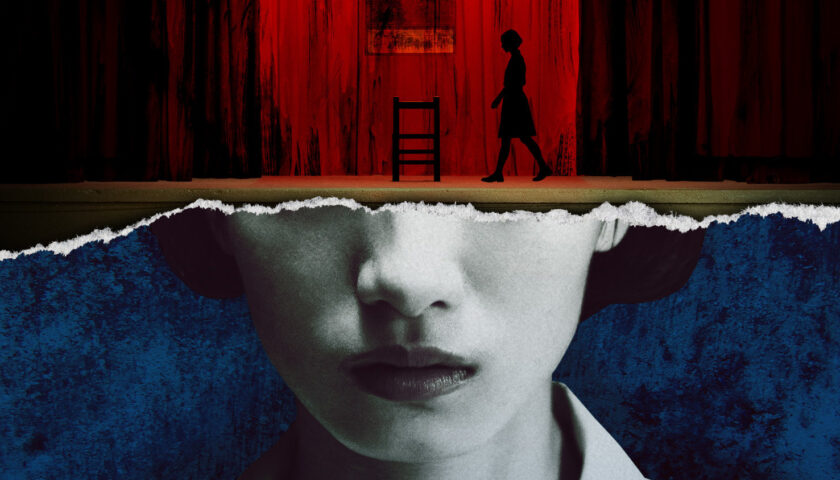 Thirty years after that incident, in the late 1990s, a student named Yunxiang Liu (Lingwei Lee), comes to Greenwood High School, a real change of pace from her big-city school experience in Taipei. As she and her mother ride the bus to Jinulan, another passenger warns them that the Greenwood school hasn’t changed for decades.

Sure enough, on her first day of school, the school’s main security guard confiscates Yunxiang’s books, like 1984 and Brave New World. She also finds out that some students in her class are designated as “devils”; they have to wear pendants with the word “Devil” on them, and they’re ignored by their classmates. They’re essentially the rabble-rousers of the class, and are made outcasts because of it.

On day 2, Yunxiang sees the Hanchu building, barricaded and dilapidated since the girl committed suicide three decades earlier, which of course intrigues her. As she sneaks a cigarette on the roof, she runs into one of her class’ devils, Wen-liang (Guan-Zhi Huang), who seems to appreciate the newbie’s rebelliousness. He lets her listen to the CD he’s listening to, and the two of them seem to bond. But as they’re about to leave the roof, they see another student, who launches herself off the roof, much like the girl did 30 years ago. As they run out, Yunxiang leaves a pill bottle behind.

As the investigation goes on — there are hints that the girl killed herself in a ritualistic sacrifice — Yunxiang confides in her class leader that she was in the building. A devil who overhears them calls her out, and Yunxiang gets that girl’s “Devil” medallion. But when Yunxiang goes back to the building to retrieve her pill bottle, a spiritual presence — the ghost of Ruixin Fang (Ning Han), the girl who killed herself 30 years prior — makes herself known and they make a deal; Ruxin will take care of Yunxiang’s awful teacher for a future favor. When Yunxiang falls asleep, she sees the result of the deal she made with Ruixin.

Detention is based on a popular video game of the same name, and the first episode only scratches the surface about what’s actually going on at Greenwood High School, both in the ’60s and in the ’90s.

The idea is that the school is still operating under the People’s Party “Cultural Revolution” parameters from the ’60s, where dissenters were purged and literature censored. Ruixin is going to bring Yunxiang into her world to show her the struggle that she and the rest of her revolutionaries went through, to try to change how conservative the school still is.

But in the first episode, all we see is a student who is flummoxed by how old-fashioned things are at Greenwood, and a “rebellious” student who seems to be the only one she can relate to. There’s some tension there, of course, mainly having to do with the existence of Ruixin’s ghost and what she’s capable of. But since most of the first episode is more setup and less an advancement of the story, we’re still in the dark (almost literally, as most scenes are dimly-lit) at the end of it.

The performances are mostly fine, though no one particularly distinguishes themselves from anyone else. But performances aren’t key on a show like Detention Is it scary? Not quite yet, but there’s lots of potential for scares as the series goes along.