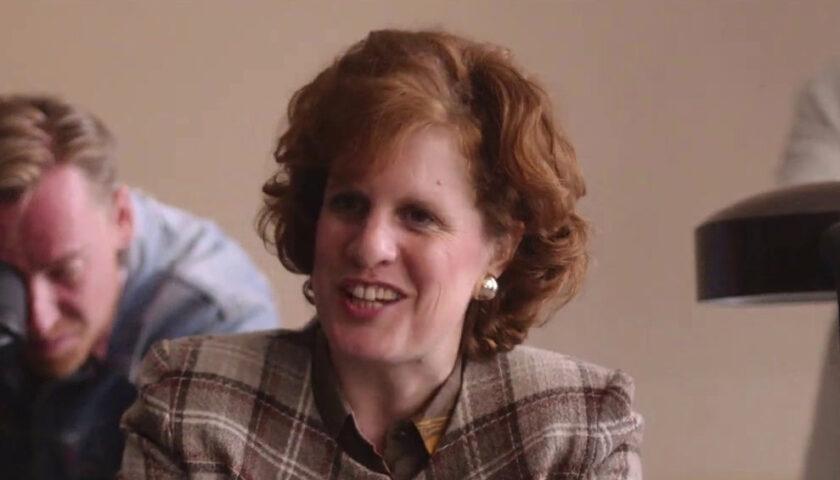 Frank (Minne Koole) and his brother Ramon (Chris Peters) founded Teledutch, the first phone sex line in the Netherlands. Both are exceedingly wealthy because of the line’s popularity. The woman doing the narration is Marly Saolmon (Joy Delima), who is one of the top voices; we see her in the booth doing her thing, while admitting she’s a prude. We also see her as at Club RoXY on New Year’s Eve, with DJ Mischa Brandt (Joes Brauers) getting head while he works the turntables; his girlfriend (and Marly’s best friend) Janna (Julia Akkermans) is in the audience. Times seem pretty good. So why does Frank want to drive his new Ferrari into the river?

We go back three years. Marly is a college student who still lives with her relatively conservative parents, right outside Amsterdam. Janna offers Marly a room in her flat, and even tells her how she can work to pay the rent; she knows of a gig recording sex line tapes for a new company called Teledutch.

Marly, tired of her parents’ rules and her mother insisting that she shouldn’t live in the “dirty city,” she goes to Teledutch and records a tape. She’s so stilted, though, that the recording is deemed unusable. But when Frank is taking the reporters around, she happens to be in the recording booth when the cameras are there. She shows up in the report that makes it to air, shaming her mother so much that she kicks Marly out of the house. But the line gets so jammed with callers that it more or less takes down the country’s entire phone system.

Dirty Lines, created by Pieter Bart Korthuis based on Fred Saueressig’s book 06-Cowboys, takes the right tone when it comes to telling the fictionalized story of the Netherlands’ first phone sex line. But at the same time, it isn’t just about people having fake orgasms in recording booths, or even Frank’s over-the-top way to promote the business. Like the two shows we mentioned above, Korthuis combines some pretty funny moments with personal stories that have a lot of potential to take this show into some interesting dramatic territory.

But the episode thrives in its smaller moments, like the pre-house dance club tradition of women not looking like they’re having fun, getting hit on by awkward guys in striped shirts, or the fact that Ramon requested everyone bring him CDs for his birthday. Anoek talks all the way through the babymaking sex she has with Frank. Ramon can’t have sex with his wife without looking at a clothing ad with shirtless male models. A hot new professor takes over the sexology class Janna and Marly are taking. All of this background is not only funny, but it informs how the characters will evolve and react going forward.

Delima’s performance as Marly ties it all together, because her presence is so magnetic. She does a fine job of playing a prude who doesn’t want to be one, and it’ll be interesting to see how Marly changes over the three years this season will likely take place.