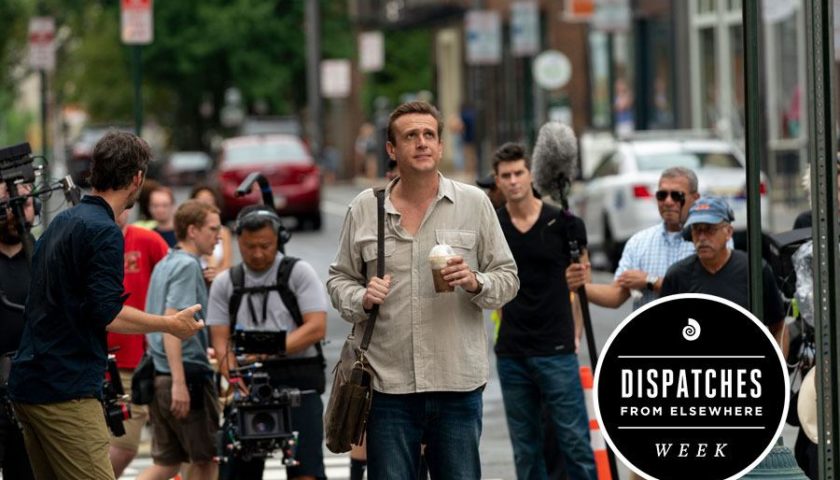 When they start noticing unusual twists on reality blooming all around them in their otherwise unremarkable Philadelphia lives — leading to an elaborate scavenger hunt unlike anything they could’ve imagined — the main quartet of characters in “Dispatches From Elsewhere” think they’ve got it figured out. The charismatic Simone (Eve Lindley) embraces the phenomenon as an intriguing, hilarious prank that lets her live as freely as she always wanted. Intense Fredwynn (André Benjamin) is positive he’s stumbled across evidence of a nefarious conspiracy and/or shadow network of power players. Janice (Sally Field), a sweet wife and mother who resents anyone who would dismiss either aspect of her life as insignificant, is relieved to play a fun game. Peter (series creator Jason Segel) is just happy to have something to look forward to, something to make him feel a little more alive outside his nightly ritual of TV and graying supermarket sushi. All of them, despite their starkly different paths and backgrounds, want the same thing the puzzle promises them: the ability to feel that their lives have greater meaning than they’ve heretofore been promised.

This yearning for connection and some kind of larger purpose among the characters keeps “Dispatches From Elsewhere” from spinning too far off its own off-kilter axis. The new AMC drama can be frustrating in its deliberate obfuscation; it’s a mystery that seems more concerned with crafting the trail of bread crumbs than with revealing where they lead. It devotes considerable time and energy to switching up its format, playing with dreamscapes, animated interludes, fantastical production design and an expertly calibrated performance from Richard E. Grant as the ominous and dapper puppetmaster, Octavio. It can all be overwhelming, but Segel weaves in enough insights on human longing to keep the chase compelling beyond its often confusing clues.

The premiere, which focuses on Peter stumbling out of numb complacency and into his bold new life of adventure, is especially bewildering, and purposely so. Segel, who also wrote and directed the first episode, seems to have taken more than a few cues from Michel Gondry, the filmmaker whose surreal versions of banal worlds in works like “Eternal Sunshine of the Spotless Mind” and “The Science of Sleep” have practically created a genre unto itself. It’s a tricky balancing act to keep a constantly shifting world rooted in something familiar so as not to completely lose the audience. “Dispatches From Elsewhere” gets better at that as it goes, leaning into the emotional journeys of its accidental detectives. (It helps that the show can be refreshingly self-aware, as when Simone sighs that Fredwynn’s theorizing about big data villainy isn’t half as fun as “the magical realism stuff” she and Peter have been chasing.)

No matter how good a mystery might be — and the one that ensnares our heroes here has an uneven success rate despite the show’s constant attention to intrigue — it’s often only as interesting as the people trying to solve it. The problem with the first episode is that it tries to lure the audience into a bizarro world of possibilities while focusing almost entirely on Peter — who, quite intentionally, is an extremely passive character barely able to string together a sentence without apologizing for trying to do it at all.

It’s no coincidence that the series picks up considerably once it hands off the baton at the end of the pilot to Lindley’s Simone, an excitable but brittle trans woman who’s so close to having the life she wants that she can taste it. After that, “Dispatches” turns to Fields’ Janice, whose pain at losing the life she loved is palpable in every frame, and then finally to Benjamin’s Fredwynn, who trusts no one and nothing but his own meticulous “mind palace.” All three actors are extraordinary in their parts, with Lindley in particular holding her own among more veteran actors. And while Peter as a character is less magnetic by design, Segel, in his first regular TV role since the slapstick sitcom juggernaut that was “How I Met Your Mother,” proves once again that he’s one of the best shy smilers in the business as the character’s indifferent fog begins to lift.

“Dispatches From Elsewhere,” with its enthusiastically scattered focus and willingness to dive into whatever format or mode of storytelling might suit it from scene to scene, could easily lose the thread as its central puzzle gets more complex. But if it keeps a sharp enough focus on why its four heroes dove headfirst into the hunt — rather than on what could make it stranger — it might be able to yield some of that wild magic for its audience too.