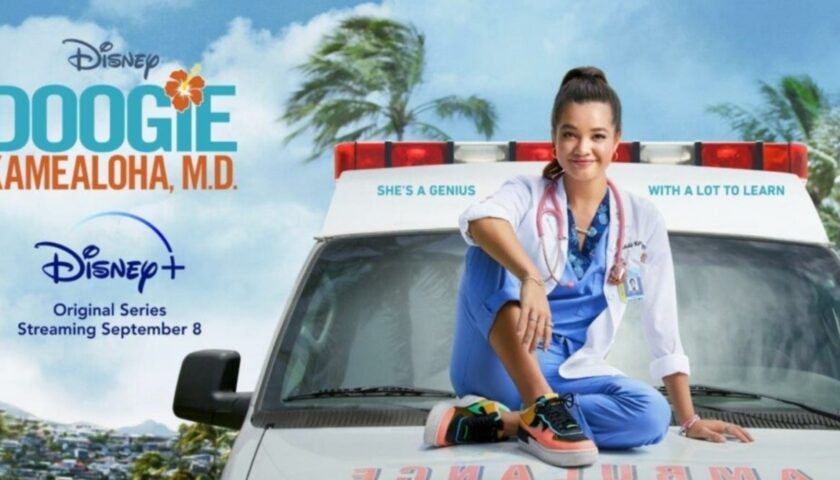 Doogie is back! Well, not Doogie Howser. Actually, Doogie Howser exists, but not in a real way. I mean, the show Doogie Howser, M.D. exists in the timeline of Disney+’s newest, Doogie Kameāloha, M.D. However, they are basically the same show. It’s all very confusing and meta and my computer just started to smoke after trying to type a coherent explanation.

Doogie Kameāloha, M.D. follows Lahela Kameāloha, played by Andi Mack’s Peyton Lee. Just like the original show starring NPH, Lahela is a teen genius, becoming a medical school graduate and licensed M.D. Of course, she’s still only sixteen, so amidst saving patients’ lives and trying to figure out rare diagnoses, she’s also going to her first dance and testing for her driver’s license. Just quirky teen things! The titular “Doogie” comes from the other physicians at the hospital nicknaming her after the original series. Yes, this is a reboot that is aware of the original show. We like to call that a-hat-on-a-hat.

Over the course of the two half hour episodes given for review, the show is already confident in its tone, breadth, and voice. The pilot has no time for exposition and jumps right into the action. While it threw me for a bit of a loop based on the “preferred pilot format,” I appreciated how assured the show is in itself.

The balancing act between Lahela’s personal life and her workload is calibrated nicely thus far, highlighting both sides in such a way to always leave the viewer wanting more. Throughout the dramedy, I was surprised at how flat-out funny the writing is allowed to be. It’s a medical show, so heartbreak and joy will ebb and flow with each passing patient, but the amount of laughter I let out of smart punchlines surprised me.

Knowing Peyton Lee from Andi Mack, seeing her headline another Disney project is phenomenal. She’s a wonderful on screen presence and I am continually thrilled to see her shine. Just in the first two episodes, I already have a feeling she will be inspiring hundreds of kids and teens to become medical professionals. The rest of the cast is equally great with nary a sour one in the bunch. Kathleen Rose Perkins and Jason Scott Lee play her parents with so much heart and wit, while Emma Meisel as Lahela’s best friend Steph is an immediate scene stealer.

Doogie Kameāloha, M.D. is set in Hawaii, instead of the original’s LA setting, reflecting reboot developer Kourtney Kang’s own background. This allows the show to not only include beautiful vistas, buckets of surfing, and many a dig at insufferable tourists, but also to highlight Hawaii’s culture, spirit, and people. Even on major shows set in Hawaii, the lead characters tend to be white (I’m looking at you, Hawaii 5-0), so this is a wonderful (and necessary) change of pace.

Above all, this show is doing what it set out to do. Rarely does a show hit their target so well that a pilot feels like a midseason episode. Doogie Kameāloha, M.D. is beyond confident in itself, and thus, I’m confident that I’ll be watching every week.