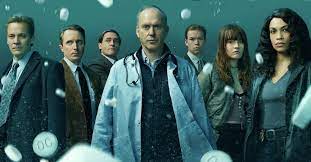 Hulu’s harrowing eight-part series, developed by Danny Strong and inspired by Beth Macy’s 2018 best-seller, captures the staggering scope of America’s opioid crisis, and the almost Sisyphean battle to take Purdue Pharma down. It’s nearly impossible to wrap one’s head around the insidious ways Perdue Pharma fomented a growing acceptance of opioid use in the medical community, all based on their false claim that fewer than 1 percent of patients would become addicted to OxyContin. But Dopesick (premiering October 13) deftly corrals the vast addiction epidemic through intimate, deeply engrossing stories of human devastation.

Keaton is phenomenally poignant as Dr. Finnix, a genial widower and devoted doc, the kind of guy who’ll stop by an elderly patient’s home every night to make sure she’s taken her meds. Of course, he wants the best for Betsy — he delivered her, for Pete’s sake! —  and if Purdue Pharma says Oxy will safely take away her pain, why wouldn’t he prescribe it? Keaton and Poulter have a sweet and appealing chemistry, as the good doctor takes a grandfatherly liking to the politely persistent Billy. But their business relationship is built on a lie — no matter how unintentional on Billy’s part — and Keaton makes us feel the agony of Dr. Sam’s inevitable regret.

Dever adds another remarkable performance to her growing résumé as Betsy, whose descent into desperate addiction is almost too painful to watch — for us, and for her confused and agonized parents (Ray McKinnon and Mare Winningham, both quietly heartbreaking). Like all who fall victim to OxyContin, Betsy is trapped inside a body that is no longer hers.

Stuhlbarg plays Sackler as a sort of socially awkward Bond villain, all soft-spoken menace and relentless hubris. (Last month, the Sackler family forfeited ownership of Purdue Pharma as part of a $4.5 billion dollar settlement, but the family continues to deny any wrongdoing.) At one point in the series, Sackler extolls the success of OxyContin at a family meeting, boasting that it’s on track to become the company’s first billion-dollar drug. When he revealed the poster-sized photo of Purdue’s next product — a supersize, 160 milligram Oxy tablet — I yelled “No!” at my screen like I was watching someone about to open the wrong door in a horror film. But Dopesick is even more terrifying, because the monster at the heart of this story is real.