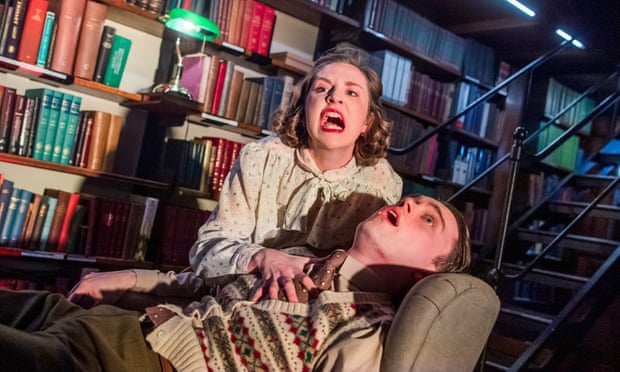 Review:Given that Bram Stoker researched his 1897 gothic novel in this very building there is a certain logic to Dracula becoming the first stage show to be presented here in the London Library’s 178-year history. The production is the work of the site-specific Oxford-based Creation Theatre and turns the normally sedate reading room into a place of ghoulish horror but, not for the first time, I found myself thinking that the English vice is adaptation.

Since Kate Kerrow’s brief was to provide a script for two actors, she faced an obvious problem in condensing a novel that uses multiple narrators. Her solution is to focus on the relationship between the sexually dysfunctional solicitor Jonathan Harker and his more adventurous wife, Mina, who seeks to understand the mysterious death of her friend Lucy. This means the two actors have to play a host of other characters – including Dr Seward, Professor Van Helsing and Renfield – and that Harker’s fatal visit to Dracula’s castle now comes near the story’s end rather than as its starting point.

There are two big difficulties with this. The story would be virtually incomprehensible unless you had read the book and is hard to follow even if you have. Kerrow also seems unsure about the significance of the blood-sucking Dracula, whom we never actually see. His vampirism is presented as both a noxious virus that infects future generations and a symbol of a demonic sexual force to which the repressed Harkers finally surrender. I’ve heard of the Library of Congress but never before witnessed congress in the library.

Faced with a muddled narrative, Helen Tennison’s production throws at it the works: ominous music, vulpine howls, coffin lids rising from the upper balcony and even a pair of glowing, disembodied eyes that suggest a sequel to Cats called Bats. The two actors, Sophie Greenham and Bart Lambert, do a sterling job in steering us through the story. I was left thinking, however, that I’d far rather have a play about Stoker’s complex psyche, including his obsession with Henry Irving, than yet another attempt to boil down his baggy book.