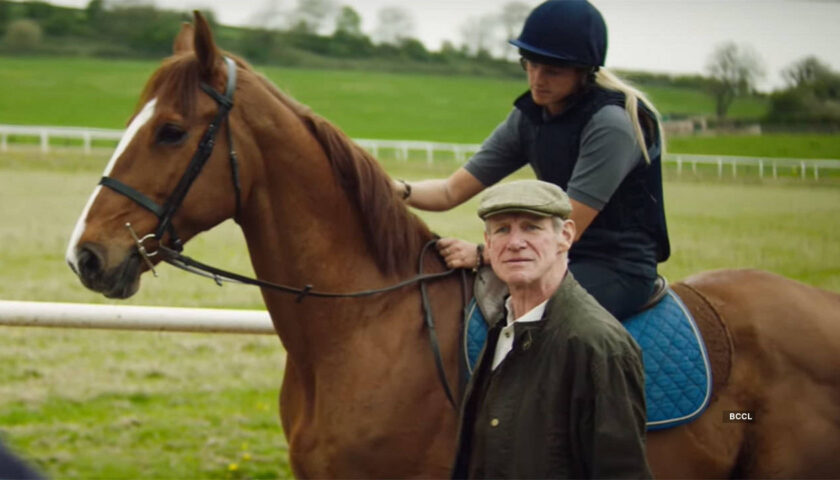 Anyone who saw director Louise Osmond’s 2015 documentary Dark Horse, winner of the audience award at Sundance that year, knew it was a racing certainty that this almost-too-good-to-be-true story would get made into a feature film someday. Some critics even had casting suggestions: Jim Broadbent was mentioned a couple of times for the role of Brian “Daisy” Vokes, husband of Jan Vokes (Imelda Staunton? one critic mused), who was the mastermind behind the plan to breed a racehorse and pay for its keep and training through weekly subscriptions. The members of this syndicate were mostly clients at the local village pub where Jan worked as a barmaid, in a former mining village in South Wales.

Like horse racing, filmmaking is a high-risk gamblers’ game, but the team behind Dream Horse, the resulting dramatization of the Vokes’ story, have surely bred a winner with this endearing, determinedly crowd-pleasing adaptation. Even without knowing the real-life facts (in the U.K., especially in Wales, the story’s well known), the outcome could very easily be predicted by anyone who’s ever seen a British movie about plucky, working-class folk in a provincial setting triumphing over odds or at least exceeding expectations. But thanks to a well-assembled package, smoothly directed by Euros Lyn (best known for his TV work, including Doctor Who, Broadchurch and an episode of Black Mirror), and good casting all around, crowned by the reliably excellent Toni Collette as Jan, this has every chance of sprinting to victory at the box office finish line.

Unsurprisingly, Neil McKay’s script focuses largely on the human — and, to a lesser extent, animal — characters here rather than the minutiae of racing, an emphasis made right at the start as we see Collette’s Jan, her sartorial style knob turned right down to the dowdier end of the protean actor’s glamour spectrum, get up and face a typical day. There’s feeding her various pets (a massive wolfhound-type dog, some geese that live in the kitchen), working a shift at the local supermarket and tending to her elderly parents at their home nearby. Then it’s home to see her husband, Daisy (Owen Teale, a gruff delight), a former farmhand whose arthritis has turned him into something of a couch potato. After feeding him dinner, it’s down to the pub (a set or location that looks exactly like the Welsh workingmen’s club in Pride) to work the evening shift.

Tonight, however, she overhears tax adviser Howard Davies (Damian Lewis, getting back to his Welsh roots) talking knowledgeably about horse racing, a passion of his, but one that almost cost him his family home when a bet didn’t come off. A natural nurturer, Jan has won prizes all her life by breeding whippets, racing pigeons and the like, and she gets the notion she’d like to try raising a racehorse next. Cue one of many pop-music-bedded montages showing Jan throwing herself into researching horses and racing, and then bringing Daisy, Howard and many other British-film-comedy-kooky characters to her cause as she buys a mare, Rewbell. They stable her in the local garden allotment while they raise enough through the syndicate for stud fees to get Rewbell knocked up by a thoroughbred sire.

The plan succeeds, and the offspring is a beautiful chestnut stallion (inevitably, several horses were used for the film, but the horse makeup keeps the white blaze on their noses consistently shaped) whom the syndicate votes to name Dream Alliance. Sadly, Rewbell dies in childbirth, adding a little tincture of tragedy to help get the audience even more invested.

From here on out, the screenplay goes through regular cycles of challenge, setback, recovery and victory, as if replicating in the storyline the inherent structure of a typical horse race. For instance, Jan and Daisy bring Dream to Philip Hobbs (Nicholas Farrell), one of the top trainers in the country, hoping he’ll agree to get Dream into racing shape. Hobbs almost dismisses them as amateurs unworthy of his time, and Dream looks too fiery to control but then suddenly takes off, showing form that might just be promising. So Hobbs takes him on.

That pattern gets the proverbial rinse and repeat throughout the film, as Dream starts placing higher and higher at the meets. Adroitly edited as they toggle back and forth between the track and the spectators looking variously nervous and then ecstatic, the racing scenes are expertly assembled, enhanced with sometimes surprising angles on the horses themselves, the odd drone shot, and thoughtful scoring by composer Benjamin Woodgates that sounds a little different — drier and more experimental — from the usual rousing orchestral manipulation you hear in Hollywood films. Best of all, no one can do joyous happy face like Collette as her Jan watches Dream cross the finish line, even in third place — although Lewis, Teale and some of the many supporting characters come close.

As it happens, some of the characterizations in the ensemble are a little on the ripe side and a bit too much like stock eccentric light relief. But it’s admirable the way the film balances the adrenaline-charged race sequences with the drama going on off the track, particularly between Howard and his wife, Angela (Joanna Page, from BBC sitcom Gavin & Stacey), who doesn’t approve of his gambling — understandably, given that he almost lost their house.

Elsewhere, some members of the syndicate gang up against Jan when she unilaterally refuses to sell Dream to a rival breeder (Peter Davison) without consulting them. But it all works out in the end, of course, and Collette nails the potentially corny but deeply affecting line, a version of which is in the documentary Dark Horse, about how all her life she’s been someone’s daughter, wife or mother, but breeding Dream has made her feel like herself.

One note: Perhaps because the script already has so many characters to juggle, absolutely no screen time is given to any of the jockeys who ride Dream. Indeed, the editing serves to suggest, as it cuts between beast and owner, that the horse just does it himself, somehow magically motivated by Jan’s sotto voce urging. Anyone who knows something about racing or anything about matters equestrian knows that this does a huge disservice to riders, who deserve better from a film that ought to keep them on its side just as much as the general public.