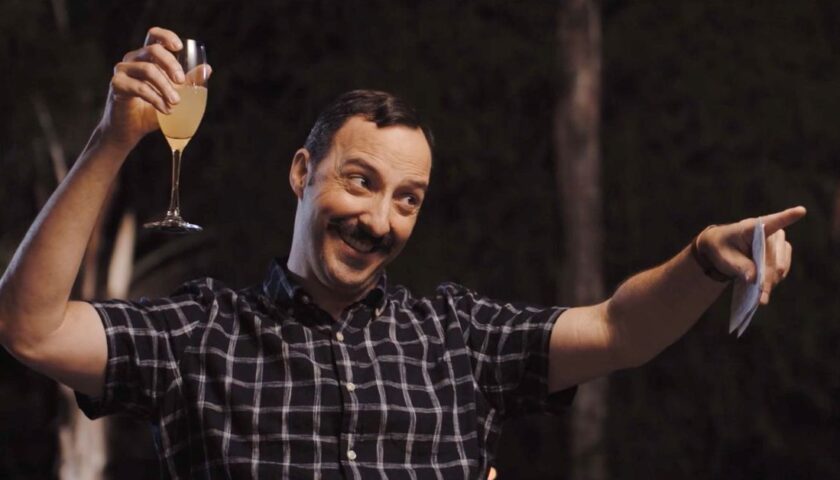 More like a mayonnaise sandwich on Wonder Bread than the at-least-mildly-crunchy breakfast cereal of its title, “Eat Wheaties!” is a movie whose blandness ultimately triumphs over its annoyance — but only by a hair. This is the kind of underdog comedy in which you soon want to kick the dog.

Starring Tony Hale of “Arrested Development” and “Veep” as a middle-aged dweeb whose claim of a past celebrity friendship improbably snowballs to ruin his life, Scott Abramovitch’s directorial debut aims for the tenor of something like “The 40-Year-Old Virgin” minus the raunch. But its content and execution are innocuous to the point of tedium, while the protagonist is no undervalued sweetie but the kind of grating personality that can clear a room. Screen Media is launching the film April 30 on thirteen U.S. screens as well as VOD.

Sid Straw (Hale) is a longterm employee at a vaguely purposed white-collar firm — we’re eventually told he’s in marketing, which seems a stretch for someone of his clueless social skills — in Scottsdale, Ariz. He clearly irks all of his coworkers, for instance telling one eye-rolling African American colleague, “I suppose you like your coffee strong and Black!” The mistaken belief that he’s hilarious is evidently based on his erstwhile membership in a college comedy improv group called Bootie & The Hoefish.

Ergo no one believes Sid when, having arbitrarily been selected to co-chair his alma mater’s West Coast reunion, he tells them that he used to be friends with classmate turned movie star Elizabeth Banks. Nonetheless, the upcoming event sparks his joining various social media platforms, and apparently having no idea how they work (or of the concept “cyber-stalking”), he begins posting a ton of chummy, rambling messages to his famous former pal. He somehow doesn’t realize that these are public, eventually creating a situation in which Banks’ bitchy L.A. agent (Sarah Chalke) slaps a restraining order on him for “client harassment.” That scandalous turn then has serious consequences for his employment, housing and nearly everything else in what was already a rather pathetic existence.

We’re meant to feel for poor, naive Sid as these misfortunes befall him, but he’s not the endearing goofball the film seems to think he is. With his stale ’80s pop culture jokes, childish demeanor and other cringe factors, he is a little too convincing as the guy who is barely tolerated by everyone around him. When he meets a nice woman (Sarah Burns), she understandably makes an excuse to end things after a second date. His sister-in-law (Elisha Cuthbert) still resents him for “ruining” her wedding to his brother (David Walton), and you can’t blame her. Also an executive producer here, Hale has been a nimble comic actor elsewhere. But he cannot make Sid Straw anything but an awful, irritating bore.

“Eat Wheaties!” is based on a 2003 comic novel by Michael Kun called “The Locklear Letters,” which Abramovitch’s script has (as the press notes put it) “updated for the social media era.” A big part of the tone-deafness here is that this is done poorly: Why would Sid, a man with no real friends or apparent hobbies, be a complete innocent to all things online? Someone like him would be living on social media.

Also, the entire plot depends upon his messages to Banks going disastrously viral. Yet while they do have an “embarrassing overshare” quality, they’re innocently pitiful rather than creepy; there is no reason at all why they might kick up enough fuss to destroy his life. A movie framed as more of a fanciful comedic fable might have gotten away with that basic implausibility. But “Eat Wheaties!” is too characterlessly straightforward to make any such leap, from its generic overlit look and uninspired other production values to the substitution of Los Angeles locations for “Arizona.”

When Sid’s fortunes inevitably turn around, his comeback triumphs seem to be checking items off a formulaic list. Their deflating quality gets capped by Elizabeth Banks finally making an “appearance” — on the soundtrack, as a voicemail message. Such is the film’s flaccid nature that you could argue the most interesting thing about it is the very long list of product placements in the closing credits.