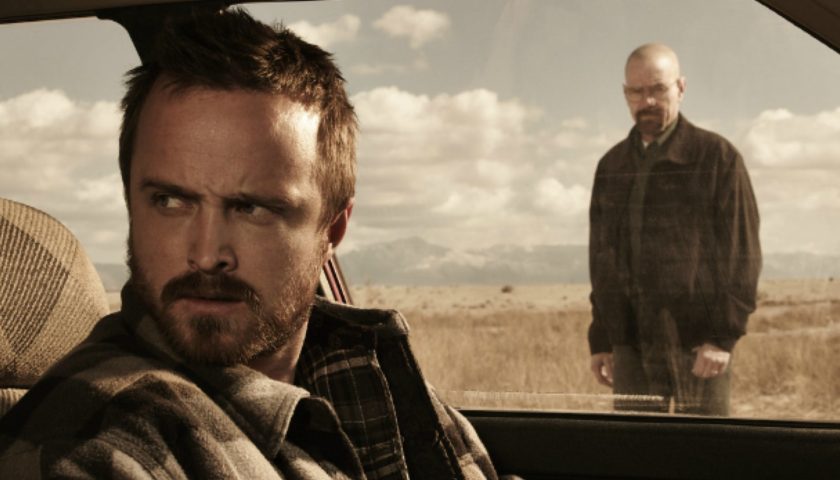 This sudden bounty has given fans of the original series – which ran on AMC for a total of five seasons between 2008 and 2013 – plenty to speculate about, and we would be remiss if we didn’t join in. So, as we count the days until its official release in a little over a month, here is everything we know about El Camino: A Breaking Bad Movie thus far, along with a few educated guesses about what surprises it may hold in store.

Netflix likes to employ a “surprise drop” marketing strategy for high-profile projects, this being no exception: El Camino’s official release date is 11 October of this year, less than seven weeks away.

We can probably expect a few more teasers, and maybe even a full-length trailer, between now and then, although it wouldn’t be surprising if plot details were kept secret up to the day of release.

“The Netflix Television Event EL CAMINO: A BREAKING BAD MOVIE reunites fans with Jesse Pinkman (Emmy-winner Aaron Paul). In the wake of his dramatic escape from captivity, Jesse must come to terms with his past in order to forge some kind of future. This gripping thriller is written and directed by Vince Gilligan, the creator of Breaking Bad. The movie is produced by Mark Johnson, Melissa Bernstein, Charles Newirth, Diane Mercer and Aaron Paul, in association with Sony Pictures Television.”

As noted in the above synopsis, series creator Vince Gilligan is at the helm as writer and director, while co-lead actor Aaron Paul stars as everyone’s favorite long-suffering meth dealer, Jesse Pinkman.

Aside from Paul, the only other series regular we know for sure is returning is actor Charles Baker, the only cast member other than Paul as of yet listed on the film’s official IMDB page. Baker, who plays Jesse’s loyal but skeezy friend Skinny Pete, is front and center for the teaser trailer, which sees him refusing to help law enforcement agents in their search for Jesse.

When last we saw Jesse Pinkman, he had just been freed from months of captivity and forced labor at the hands of a white supremacist drug syndicate by Walter White. After refusing to take vengeance on his former teacher/business partner/surrogate father/mortal enemy, Jesse drives off into the night in the titular El Camino, and the final shot we see of him has him first laughing, then screaming into the void as he hurtles down an empty stretch of road on his way to parts unknown.

Per the synopsis and teaser, El Camino picks up from there (though we’ll no doubt be treated to one of Breaking Bad’s signature opening time jumps), with authorities searching for Jesse following the death of Walter White. As Skinny Pete notes, Jesse’s story, like Heisenberg’s at the start of Breaking Bad’s final season, has been made public making it likely that criminal elements – including possibly the cartels – are also on the hunt for him, hoping either to make use of his meth cooking skills or to extract vengeance for any of his numerous criminal trespasses over the years.

Given this state of affairs, we can expect El Camino to take the shape of a road/chase movie, (the film’s title and poster suggesting as much) in which Jesse attempts to outrun his demons both mortal and psychological. Jesse’s story has, from the beginning, been one of existential crisis, and there’s few better frameworks for exploring existential crises than a road movie.

The specter of Walter White is certain to haunt the movie, though whether or not the character actually makes an appearance is anyone’s guess (Bryan Cranston has been conspicuously silent about any involvement he may have with the film). Walt, of course, was killed at the conclusion of Breaking Bad, so obviously he won’t be showing up alive, but there’s no reason to think he might not appear in a flashback, dream sequence or, given the role of narcotics in the overarching story, a possible hallucination. The same is true of other characters whose demise Jesse was witness to or had a hand in, including former lovers Jane (Krysten Ritter) and Andrea (Emily Rios), as well as former partners-turned-adversaries (and vice versa) Mike Ehrmantraut (Jonathan Banks), Gus Fring (Giancarlo Esposito) and Hank Schrader (Dean Norris).

As for the characters left standing at the end of the series’ initial run, we can probably expect raspy voice slacker Badger (Matt L Jones) to show up, being that he and Skinny Pete are usually joined at the hip. Given the authorities are cross-examining Skinny Pete in the teaser, they seem to know who was involved in Walt and Jesse’s operation, which could mean we get appearances from fan favorites Huell (Lavell Crawford) and Kuby (Bill Burr).

As for Breaking Bad’s other breakout star, Saul Goodman (Bob Odenkirk) who is, in the world of the story, very much alive, hiding out under an assumed name and managing a Cinnabon, it’s highly unlikely he’d show up, being that he’s currently the star of his own series, the prequel-spinoff Better Call Saul, which is set for a fifth season sometime next year. Gilligan has said he intends to have Walt and Jesse eventually turn up on that show, but even though the majority of it takes place in the past, the show has given viewers the occasional glimpse of Goodman’s present situation, so you would assume Gilligan would avoid complicating or spoiling it’s long-term resolution by inserting the character in El Camino.

One final clue (which may not actually be a clue) is the original working title under which the film was shot: Greenbrier. Although placeholder titles are standard for the high-profile productions, this one might hold a deeper meaning. Greenbrier is a common term for Smilax, a type of climbing flower plant named in reference to Greek myth about a young man who falls in love with a nymph and gets turned into a plant. The character of Jesse once stated his desire to move to New Zealand and become a bush pilot, and in the days following the series finale, both Paul and Gilligan stated that they saw Jesse living a peaceful life somewhere remote, like Alaska. Might Greenbrier foreshadow a return-to-nature for Jesse?

(Of course, the name might also be a simple nod to the original series’ color palette, particularly its heavy use of the color green. If the poster is anything to go by, the movie looks to share that particular visual aesthetic.)

For all the above conjecture and guesswork, the only question that really matters is whether or not El Camino can live up to the standard set by the original series, one of the most riveting and intoxicating of the modern era. We won’t know until we see it, but there’s ample reason to be optimis

The prequel-spinoff series Better Call Saul has shown there is plenty of room within the Breaking Bad universe to tell new stories, while also digging deeper into established mythology. It also shows Gilligan’s willingness to try upend expectations about tone, pacing and style, as it is in many ways a very different beast from its progenitor.

Being that Gilligan was able to make a prequel series about a comic relief character work, there’s no reason to assume he can’t deliver the goods for a sequel about Breaking Bad’s heart and soul. It helps that El Camino is coming out at a point which is neither too close or too far removed from Breaking Bad’s final season.

It helps that the original series is neither too fresh in our minds nor too long past, although recent triumphs like Twin Peaks: The Return and Deadwood: The Movie have proven its possible for returning shows to not only live up to fan expectations but exceed them. Gilligan and company have earned the benefit of the doubt, and at this point, there’s every reason to believe there’s enough gas left in the Breaking Bad tank for El Camino to deliver something equally special.