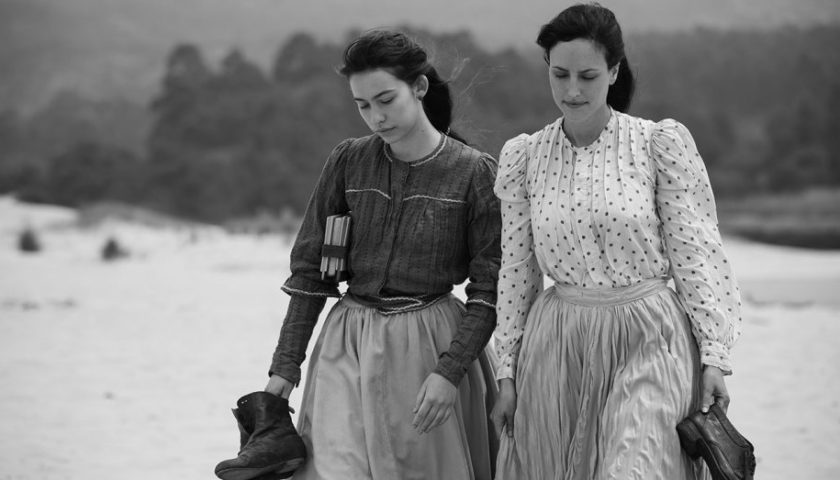 Review: On the surface, “Elisa & Marcela” may look like a lesbian love story for the ages, a salute to our brave foremothers who risked ridicule and imprisonment to express their love. If only it were so essential. Instead, Isabel Coixet’s tired romanticized biopic of two Spanish women who tricked a priest into marrying them in 1901 is a dully made, frequently ridiculous eye-roller shot in standard issue black-and-white that gussies itself up as a brave clarion call for gay rights. Slapdash in construction and lacking any three-dimensionality, the film will get peddled to LGBT viewers who thankfully have far better options, especially from Netflix.

In 1898, Marcela (Greta Fernández) begins attending a convent school in her home city of A Coruña. On the first day, she has a meet-cute with third-year student Elisa (Natalia de Molina), living at the convent with her aunt, the school’s director, and a friendship based on support and attraction rapidly forms. Whereas Elisa is mostly left to her own devices, Marcela is oppressed by her tyrannical father (Francesc Orella), the sort of stereotyped pater familias who decries female education, grumbles about his wife’s cooking, and apparently forbids more than two candles in a room at any one time — presumably this is Coixet’s less-than-subtle way of conveying the benighted atmosphere in the house. Elisa’s browbeaten mother (María Pujalte) reveals to her daughter that she’s been hiding one of Emilia Pardo Bazán’s feminist novels in her petticoats, but she’s too terrified to stand up for herself or her child.

Three years pass and Marcela lands a job as school teacher in a village next to where Elisa also teaches. In the privacy of the home they now share, the two women indulge in sensual fun that includes, for inexplicable reasons, an octopus, seaweed, and milk (though not all at once). Coixet doesn’t shy away from showing them making love, yet uncontrolled camerawork combined with insipid piano accompaniment and those odd sex props de-eroticize the union, turning the scenes into something cheap and more than faintly ridiculous.

The hostile locals, including brooding woodsman Andrès (Tamar Novas), catch on that the women are more than just friends, so Elisa disappears only to return in men’s clothing, her hair cut short, “disguised” as her cousin Mario. Fortunately for them a priest, who evidently has poor eyesight, can’t tell that her moustache is penciled on (no joke), and he marries the two in church. To prevent the ruse from being discovered, Marcela becomes pregnant by Andrès — a plot twist so ridiculous Coixet doesn’t even try to explain — but they’re found out and the couple flee to Portugal, where they’re imprisoned and threatened with expulsion.

Elisa Sánchez Loriga and Marcela Gracia Ibeas did exist, and their history is both far more fascinating and more complex than the movie meant to honor them. As so often happens, the old “inspired by a true story” line is a convenient formula for shutting down criticism, especially when recent photos of lesbian couples on their wedding day roll with the final credits, giving off that “you’ve come a long way, baby!” vibe. Yeah, we have come a long way, but so has cinema. The biggest culprit is Coixet’s maladroit screenplay, which turns an unlikely story into one that simply beggars belief, with little to breathe life into a narrative flatter than the Argentine plains that open and close the film (the couple wound up near Buenos Aires).

At least Greta Fernández’s Marcela conveys some inner conflict, but Natalia de Molina plays Elisa as a blank and lacks any credibility with that ridiculous moustache; true passion is absent, and even the extras appear unsure of themselves. A few receding iris shots seem to signal that the visuals are meant to feel old fashioned, yet the monochrome lensing lacks texture, especially noticeable in contrast to the few archival inserts during the Portuguese scenes.