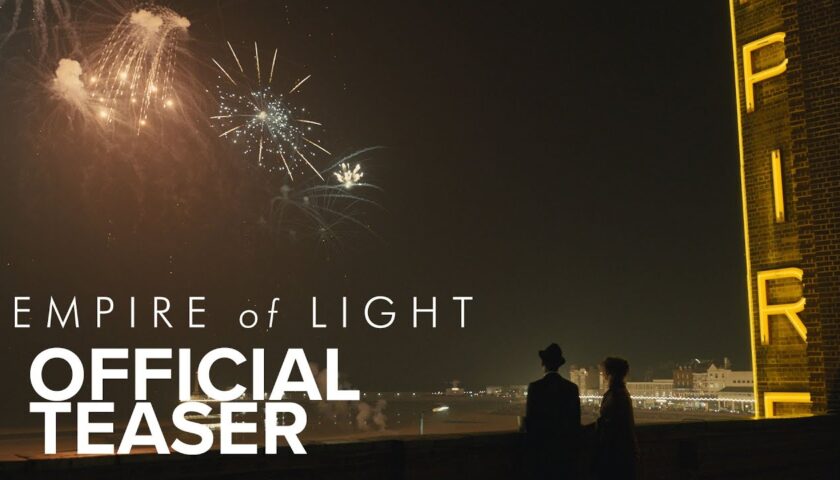 Despite being set in the early 1980s (its story spanning from “The Blues Brothers” to “Being There”), Sam Mendes’ scattershot and moribund “Empire of Light” is a movie born out of two simultaneous but unequal reckonings that erupted in the summer of 2020: The Black Lives Matter movement, and the existential threat to the future of movie theaters. Looking at those phenomena through the (not particularly nostalgic) lens of his teenage years in “there’s no such thing as society” England — a time when racism and cinema were both thriving in popular culture — Mendes strives to tell a plaintive yet poignant little story about the simple power of community.

It’s a story about a magical where light and dark mesh together to create magic, and where people can enjoy the pleasure of being surrounded by strangers without fear of being watched. As Nicole Kidman might put it: “Even the Margaret Thatcher era feels good in a place like this.” Merciful as it is that “Empire of Light” stops just short of suggesting that AMC might be our secret weapon in the fight against white nationalism, Mendes’ rear-projected view of the modern world is still too clumsy and stilted to offer any heartbreaking insights of its own. All it manages to leave us with is a warm breakthrough performance from Micheal Ward, a twinkly new score by Trent Reznor and Atticus Ross, and a fantastic clip of Olivia Colman shouting “To fuck, or not to fuck, that is the question!” while the “Chariots of Fire” music hums behind her in the background.

Less of an ode to movies than an ode to movie theaters — less “Cinema Paradiso” than Annie Baker’s play “The Flick” — “Empire of Light” eschews the strictly autobiographical flavor that has run through the recent spate of “personal stories” from major filmmakers. That doesn’t explain why this contribution to this Oscar-friendly sub-genre lacks the heart-on-the-screen vulnerability that buoyed the similarly frustrating likes of “Belfast” and “Bardo,” but Mendes’ decision not to build this movie around a stand-in for himself becomes a fitting expression of our inability to see him in it.

The story Mendes chooses to tell with the first script he’s ever written from scratch on his own is a May-December romance about two employees at a Margate cinema — the Empire — along the northern shore of Kent. Hilary Small (Colman) is a lonely middle-aged woman who appears to have worked there for quite some time; or maybe the picture house’s sniveling owner (Colin Firth as Mr. Ellis) has only made her the manager so that he has an excuse to call her into his office and demand a less-than-enthusiastic handjob. Hilary doesn’t resist the sexual harassment for the same reason that she doesn’t resist anything else: The lithium she received after being discharged from the mental institution has left her numb to the world.

New employee Stephen (Ward) fixes that in a hurry. Young, handsome, and capable of being a great architect if only the graduate schools he applied to hadn’t rejected him for the color of his skin, Stephen is a corked bottle of unspent enthusiasm, and his smile alone is enough to spark Hilary back to life. She can’t imagine that he would ever return his affections, and Mendes’ script never sufficiently explains why he might.

The age gap between these characters doesn’t require any suspension of disbelief, but no attempt is made to articulate what draws Stephen towards a co-worker who’s sad and severe even in the hokey scenes meant to establish a mutual attraction (they find a bird in the cinema’s shuttered upper floors and bind its broken wing together). Their first kiss comes a few short hours after Hilary snaps at Stephen for cruelly mocking a customer behind their back.

It’s eventually implied that the co-workers bond over a shared feeling of shame, as each of them are belittled in their own way, but Mendes strands his excellent lead actors to grasp at the straws offered by his patchy script. Even the most tender moments between them are undone by irksomely broad displays of mental illness and/or clunky illustrations of the racist attitudes that backdrop Stephen and Hilary’s brief affair. The former ring false despite the palpable volatility of Colman’s rage, while the latter — contextualized by the Brixton riots and the emergence of the National Front — are exclusively seen through the eyes of an oblivious white woman who’s as numb to the world as she is to herself. Even in 1981, the scene where Hilary buys Stephen a two-tone album because “Black kids and white kids meeting up together makes it all normal” would have landed like a lead balloon.

The only compelling character in “Empire of Light” is the Empire itself, which Mendes’ production team has recreated from the scrapheap of his memory with palpable love and immaculate attention to detail. While it’s only towards the very end that we get to watch part of a movie from inside one of the theater’s lavish auditoriums (a sadistic act of withholding meant to reflect Hilary’s own disinterest in what goes on at her place of work), even the lobby of the Empire is effective as a time machine.

The magic starts with the brilliantly lit marquee outside and continues down to the concession stand and up along the red velvet carpets before culminating in the projection booth where a finicky man called Norman (the ever-reliable Toby Jones) operates the massive pieces of machinery that bring dreams to life. Roger Deakins’ camera may have grown unaccustomed to such quotidian sights, but it lavishes the same attention over the backrooms and big screens of this movie palace as if Hilary and Stephen were James Bonds or Blade Runners.

All told, the Empire seems like an excellent place to see a movie, particularly if it weren’t this one. The most amusing subplot amid this too-distracted story involves Mr. Ellis’ Dwight Schrute-like efforts to stage the “regional gala premiere” of “Chariots of Fire,” a cringe-inducing spectacle that concludes with a bit of borrowed poetry in a film that struggles to generate any other kind.

“Empire of Light” advances forward in awkward fits and starts, occasionally threatening to cohere together into something greater than its parts before finally collapsing under its own weight at the exact moment when the real world spills into the sacred realm of the cinema. Mendes struggles to visualize how one might exist within the other, which might help to explain why his best films (“Road to Perdition,” “Skyfall”) have been so heightened and eager to leave reality behind. “Empire of Light” may think of itself as an ode to community, but it only feels honest when celebrating the movies for their escapism. How strange and telling that when we finally see someone watching a movie at the Empire, they’re watching it alone.