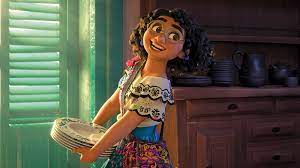 The foundations of a family are tested in Encanto, an appealing animated film which finds fresh ways to tell a story about characters with powers. This Disney production, bolstered by original songs from Lin-Manuel Miranda, follows a 15-year-old girl who is the sole member of her kin not to have magical abilities, only to learn that such talents aren’t always as enviable as they seem. Filled with vibrant colours and infused with a heartfelt message about coming to terms with trauma, the picture can sometimes grow plot-heavy, but when directors Jared Bush and Byron Howard focus on the script’s underlying emotions, the results are intensely moving.

Encanto arrives in UK and US theatres on November 24, well-positioned to be a popular family offering through the holidays. Disney’s latest isn’t quite as star-driven as the studio’s other recent entries — indeed, Miranda is probably the biggest name, although he’s not part of the voice cast — but a film that mixes laughs, tears and catchy tunes will be hard to deny.

Stephanie Beatriz voices Mirabel, an endearing teenager living in the mountains of Colombia with the rest of the Madrigal family, who years earlier were inexplicably blessed with magical powers. As each new member comes of age, he or she receives his or her own unique talent thanks to a mystical candle. (These range from the ability to talk to animals, or take on the form of other people, or control the weather.) But to everyone’s shock, Mirabel never gained a power, which she tries not to let bother her, even though it understandably makes her feel less special.

Encanto’s plot revs up once Mirabel notices that their sprawling house — which is also magical — has started to form alarming cracks on its exterior. Concerned, she tells Abuela Alma (Maria Cecilia Botero), the family’s kindly matriarch, who firmly insists that Mirabel is imagining things — nothing will ever affect the Madrigals’ magic. But Mirabel isn’t convinced, setting out to determine what is going on — a quest that will put her in contact with Bruno (John Leguizamo), Mirabel’s black-sheep uncle who abandoned the family long ago.

Bush and Howard, who were both directors on the Oscar-winning Zootopia, give the film a cheerful glow, aided immensely by Beatriz’s radiant performance. With her big glasses and bigger smile, Mirabel exudes a warm energy, looking after her younger cousins and serving as the emotional glue for her family. But there’s also a little insecurity in there as well, as the filmmakers illustrate that Mirabel is compensating for her lack of powers — she’s so helpful and friendly, in part, because she doesn’t want to draw attention to her perceived ordinariness.

Not surprisingly for a Disney film, Encanto has morals to impart — specifically, the notion that all of us are special in our own way — but it’s impressive how thoughtfully those sentiments are handled. Mirabel shares her concerns about the fading magic with her older sister Luisa (Jessica Darrow), who has super-strength, leading to our heroine realising that her sibling feels a literal weight on her shoulders because it’s assumed nothing bothers her. Luisa’s rarely-revealed vulnerable side is expressed vividly in ‘Surface Pressure’, one of the film’s better songs contributed by Miranda, the lyrics exploring anxiety and the fear of not living up to expectations — concerns, we will come to discover, that are common among the Madrigals.

It’s slightly disappointing that Encanto occasionally becomes bogged down in Mirabel’s investigation as to why the family’s powers have grown wobbly and what actually prompted Bruno to turn his back on the Madrigals. Ultimately, those mysteries aren’t as compelling as the character dynamics and the film’s thematic undercurrents. Without spoiling anything, let it be said that the magic — which first appeared during a moment of incredible tragedy for Abuela — has always carried with it an unspoken emotional burden that has only built up over generations.

In a sense, Encanto is about finally acknowledging that burden, and in an age of superhero blockbusters, it’s refreshing to watch a film in which the psychic toll of having powers is so smartly examined. Underneath the percussive, buoyant tunes and the colourful, breezy animation is a story about understanding that people who seem better off than we are may be carrying private pain that they keep bottled up inside. Encanto has some narrative shortcomings, but those minor weaknesses prove oddly appropriate for a film that argues that perfection is overrated — after all, its our flaws that make us unique.