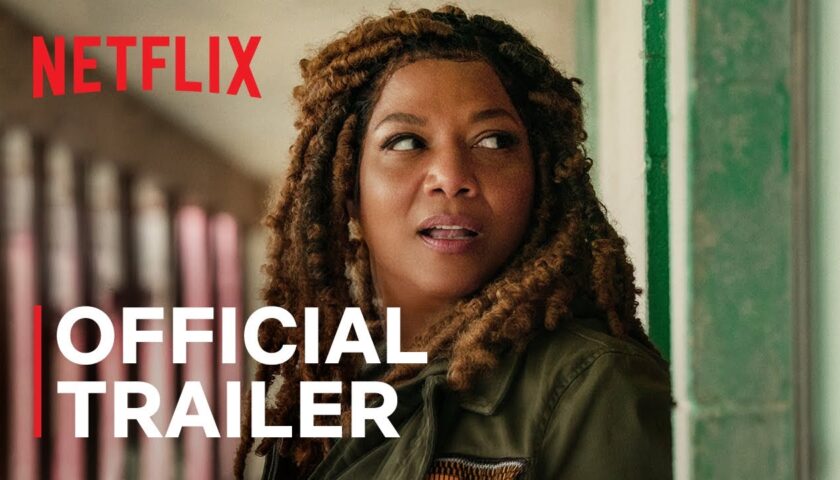 Netflix has released the trailer for End of the Road, a family road trip thriller with Queen Latifah in the protagonist role. The thriller will follow Brenda (Latifah), a widow who has recently lost her job and decides to move her family across the country to start a new and better life. Unfortunately, their journey to a better life turns out to be longer than expected as they come to find themselves in the crosshairs of a mysterious killer.

The two-minute trailer opens with a fast-paced car chase in the desert with flashes of a distraught Brenda before taking viewers back to the circumstances that lead to her anguish. The family of four (including Brenda’s brother played by Ludacris) is seen traveling down a lonely road flanked by miles and miles of desert. Their conversations reveal that the trip has lasted for three and a half hours and that their destination is Houston, a location that the youngest in the family seems to know little about.

As the trip continues, Brenda’s brother expresses his reservations about their decision to embark on the journey, unfortunately, his fears prove valid when a stop-over at a roadside motel sees them witness the murder of an unknown man. What begins as a family just trying to do the right thing becomes a lot more complicated when Brenda’s brother picks up a sack of cash belonging to the rampaging killer who appears intent on getting back what belongs to him. Despite the guilt of one of its own, the close-knit family will band together to defend each other against the killer.

End of the Road was made from a screenplay by David Loughery which was created from an original draft written by Christopher Moore. Loughery has made his mark in the thriller genre with an impressive list of works, including The Intruder, Obsessed, and Fatale. The movie is directed by 30 Rock‘s Millicent Shelton. “When I initially read the script, I knew that I needed to portray this family as a regular middle-class family but also emphasize their experiences as a Black family traveling through the South,” Shelton told ESSENCE Magazine of the upcoming film. Further adding:

While End of the Road is categorized as a thriller, Shelton says she was able to create “a new genre of film with End of the Road,” calling it a “family-based action road trip thriller” movie. “Having that combination of action and the heart of a family makes it really special,” the director concluded. In addition to the two rappers-cum-actors, Queen Latifah and Ludacris, the cast of End of the Road is fleshed out by Beau Bridges, Mychala Faith Lee, Shaun Dixon, and Frances Lee McCain.

End of the Road will be released on Netflix on September 9, and you can watch the trailer down below.