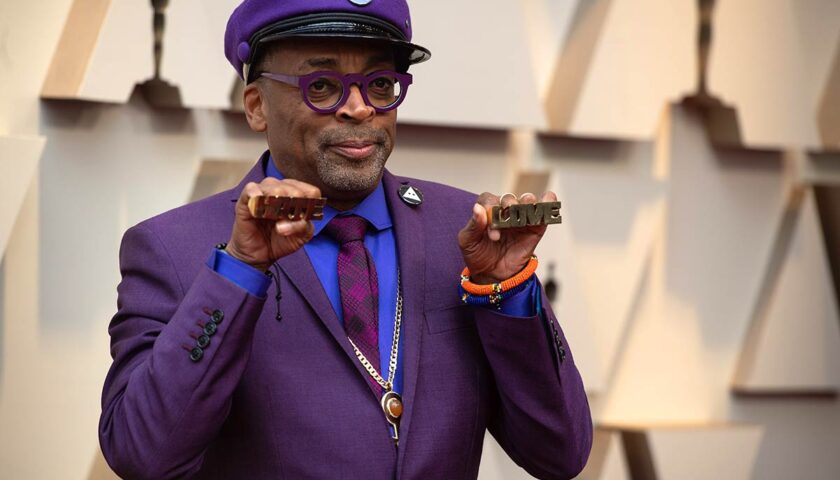 If anything could be said to be underrated about heftily praised filmmaker Spike Lee, it’s his skill as a documentarian (a classification I’d expand to include Lee’s status as perhaps our preeminent capturer of live stage performances). Take Do the Right Thing out of the conversation and I would argue that Lee’s defining credit perhaps should be the HBO pairing of When the Levees Broke and If God Is Willing and da Creek Don’t Rise.

The responsibilities of nonfiction haven’t exactly put a remove between Spike Lee and his subject matter — with the exception of one or two paycheck films, the barrier between Lee and his material is never thicker than onionskin — but the membrane between filmmaker and topic has never been as permeable as it is with his new four-part HBO documentary series, NYC Epicenters 9/11 ➔ 2021½. I don’t think Lee has ever made an unscripted project that felt so much like the experience of rattling around in Spike Lee’s brain, a cumulative representation of 20-plus years of New York City’s joy and tragedy and outrage interspersed with commentary on the Knicks, hip-hop, historically Black colleges and universities, classic musicals and, of course, the works of Spike Lee.

When you’re caroming around in Spike Lee’s head, some excesses are to be expected, especially in a documentary that could come equipped with a dozen trigger warnings. Viewers disturbed by footage of George Floyd’s murder, the Jan. 6 right-wing insurrection, the haunting early days of COVID-19, anything related to Donald Trump or footage from 9/11 should expect a visceral and occasionally unpleasant charge from NYC Epicenters. And be further warned, as if the identity of the director weren’t indication enough, that NYC Epicenters is often graceful and deft, but it’s never light on its feet around tragedy. So be prepared for Darnella Frazier’s footage of the Floyd murder, and for many shots of people jumping from the burning World Trade Center.

As visceral as your reactions to the documentary are likely to be, Lee’s reactions to the events are at least as visceral. His horror, his incredulity, his admiration and occasionally his amusement steer the project to such an extent that, through the three installments sent to critics, he is increasingly an onscreen presence.

No matter how you try to encapsulate NYC Epicenters, it’s really more of an omnibus. His approach is much more stream-of-consciousness than linear. If you go in expecting, on the basis of the series’ title, one of the many 9/11 tributes tied to the upcoming 20th anniversary, Lee doesn’t get to those horrible events until the third two-hour episode. Even though the doc is divided into chapters, I couldn’t always explain when and to what purpose those title cards are inserted.

The first night focuses — although “focuses” is the wrong word; Lee flits around like a cinematic hummingbird — on the COVID-19 outbreak and its impact on New York City, and then it pivots to the racial reckoning of the summer of 2020. For this installment, Lee is mostly off-camera. But he’s the one conducting interviews, and you have to accept or embrace that no matter how serious the issue being discussed, he’s going to goad the interviewee about where they went to college or what baseball team they root for. You could let that annoy you, but I have absolutely no doubt that Lee’s process, if not conventionally journalistic, is completely responsible for the candor of some of the interviews.

The second night picks up with the protests around the deaths of George Floyd, Breonna Taylor and Ahmaud Arbery, but transitions into a four-year condemnation of the Trump administration and the rhetoric that led to the Jan. 6 storming of the Capitol. Here, Lee makes his way on camera, because he’s got plenty of ranting to do about Donald Trump. Lee is partisan in his own way, and that way includes a pretty thorough evisceration of Andrew Cuomo as well.

The third part finally gets us to the World Trade Center and the day of the terrorist attack. Not only is Lee on camera with his own memories, but his wife and two kids offer onscreen stories of their own.

I’m not certain what the fourth installment is going to explore, and while I guess I expect it to follow the days and months after the 9/11 attacks, would I be shocked if it turned out that Spike really wants to do 117 minutes on Tom Thibodeau and the Knicks’ unlikely playoff run this spring? No, I would not.

The prism of Lee’s storytelling is mostly New York-centric. If it doesn’t always feel like his Trump agita fits the bill, many of his interviewees remind us that Trump is a much-maligned New Yorker and that, to understand him, you have to see our former president as New York sees him. An assortment of New York-based politicians — Chuck Schumer, Alexandria Ocasio-Cortez, Hakeem Jeffries — steer our understanding of the very Washington-based insurrection. In context, I didn’t quite get all the New York ties that Lee sees, as expressed through Adam Gough’s editing — like a montage of global protests tied to the summer of 2020 set to “Someday We’ll All Be Free” by Donny Hathaway.

New York City and Lee’s personal ties to the city provide a centerpiece, but where Epicenters is most impressive is in the director’s awareness of the many levels of massive historical events, relayed through hundreds of interviews. There are major public figures here, including Mayor Bill de Blasio and Al Sharpton, and then there are the dozens upon dozens of nurses, doctors and EMTs, and the civilians who remember the loved ones they lost. And it’s a Spike Lee joint, so Rosie Perez and John Turturro are here too.

At no point does Lee take the most direct approach to his subject. In most cases, the storytelling benefits from the way he highlights the narratives on the periphery. Take the 9/11 episode, which begins with the World Trade Center exploits of Philippe “Man on Wire” Petit and Owen “Crazy Parachutist” Quinn, as well as a mini-history of Black and female representation in the New York Fire Department. Then, even after we arrive at that horrible day, the featured threads include North Tower maintenance worker William Rodriguez’s heroism and the astounding logistics of the maritime evacuation efforts.

At every turn, mixed with the details you know, there are countless others you might not. Every event is a tapestry in which the famous, the ordinary and the Spike Lee are woven together, bridged by extended montages set to Leonard Bernstein, Aaron Copland and more, with any gaps patched by Terence Blanchard’s score. It’s Spike Lee’s version of an E.L. Doctorow novel, only entirely real.

Even if the series contains a few Spike-driven moments that produce minor irritation or bemusement, there are many more instances in which unexpected recollections or underexposed main characters lend new heft to amply documented events. NYC Epicenters brings new sadness to the ongoing COVID saga and new anger to what happened at the Capitol on 1/6. And it made me feel that this was the one 9/11 anniversary reflection I need to watch. I’m not a New Yorker, but NYC Epicenters offers big, emotionally heightened drama, punctuated by big, openhearted humanity and humor. Even in its flaws, it’s Spike Lee at his most Spike Lee — and, perhaps ultimately, at his best.