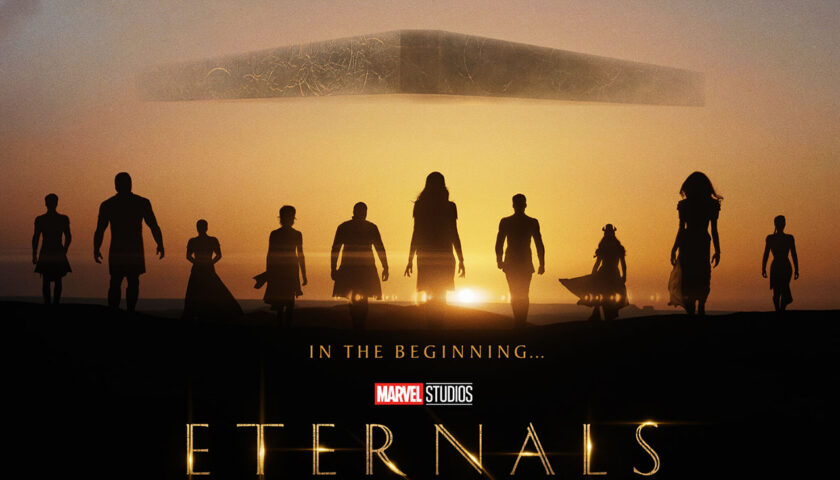 Marvel Studios’ Eternals received a PG-13 rating, although the reasoning behind the MPAA’s classification is somewhat unexpected.

FilmRatings.com’s breakdown of the rating describes Eternals as including “fantasy violence and action, some language and brief sexuality.” It’s the latter element that has fans raising their eyebrows, with the Marvel Cinematic Universe’s movies having avoided sexual content since Disney acquired Marvel Entertainment in 2009. Of course, it’s a different story when it comes to series from the now-defunct Marvel Television, like ABC’s Agents of S.H.I.E.L.D. and Jessica Jones on Netflix.

Directed by Oscar-winner Chloé Zhao, Eternals revolves around the titular superheroes, a group of immortal aliens who’ve hidden on Earth for thousands of years to protect the planet from their evil counterparts, the Deviants. However, unlike MCU movies past, romance is said to play a key role in the film’s narrative. It even features a love triangle between on-again, off-again Eternal couple Ikaris (Richard Madden) and Sersi (Gemma Chan) and Dane Whitman (Kit Harington), the mortal human who’s dating Sersi when the movie picks up in the present.

The “brief sexuality” could also allude to a scene with Thena (Angelina Jolie), an Eternal warrior who becomes romantically involved with the Deviant Kro in Marvel’s comic books. Perhaps tellingly, the final Eternals trailer shows Kro ensnaring Thena with his tendril-like appendages in an oddly intimate fashion, possibly alluding to the pair being in love.

Even more intriguing, Eternals is confirmed to include an onscreen kiss between the Eternal Phastos (Brian Tyree Henry) and his husband (Haaz Sleiman), which begs the question: will the movie be daring enough to feature a sexual moment involving a queer couple? It seems unlikely, given the MPAA’s restrictive attitude towards LGBTQ+ content, but that won’t stop fans from hoping anyway.

Whatever the case, Eternals‘ “brief sexuality” doesn’t go far enough to break tradition with the MCU’s movies being rated PG-13. However, Marvel Studios President/Chief Creative Officer Kevin Feige has confirmed that will change with the upcoming Deadpool 3, which looks to be the franchise’s first R-rated film. Beyond that, though, he indicated the MCU will continue to keep things PG-13 for the foreseeable future.

The ultimate trailer for Marvel Studios’ Eternals is right here. The film, directed by Oscar-winner Chloé Zhao, is in regards to the titular beings who’ve lived in secret on earth for 7000 years. Created by entities known as Celestials, Eternals had been tasked with defending the earth from the Deviants, their misshapen, evil counterparts.

The virtually 3-minute trailer is about to haunting music and at last, reveals the answer to a million-dollar question that inspired numerous memes on social media: why did Eternals not assist people in their battle in opposition to Thanos.

Apparently, they had been explicitly ordered by Celestials to not intrude except Deviants had been concerned. Curiously, Thanos is an Everlasting–Deviant hybrid in comics. However, in MCU it seems he was simply an extraterrestrial.

The trailer additionally reveals that it was the undoing of Thanos’ snap that will have allowed or invited the Deviants, most likely led by Kro, a frontrunner of Eternals in comics.

Eternals additionally indicators the growth of MCU. We all know now that the multiverse is an actuality in MCU, however, Eternals goes to point out how huge and previous the Marvel Universe actually is.

The motion scenes seem completely superb, although the trailer doesn’t reveal a lot and solely provides a glimpse. To this point, Eternals seems like the most important MCU film since 2019’s Avengers: Endgame.