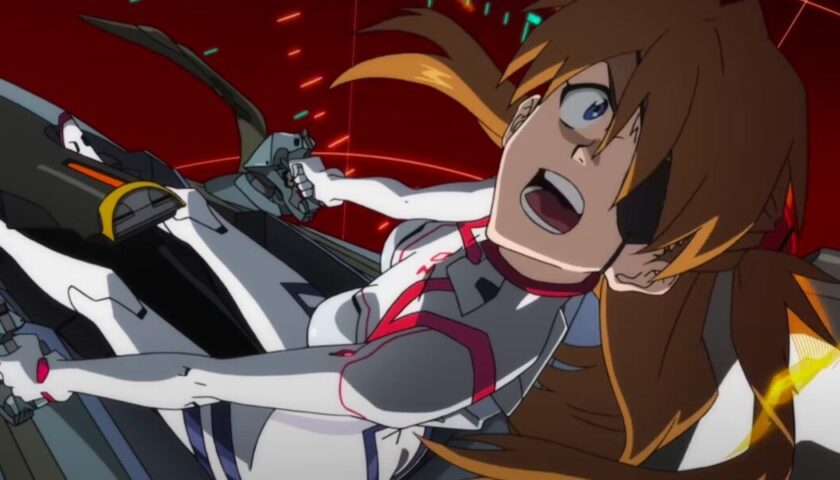 After 26 years, “Evangelion” is finally over, and all’s right with the world. It’s been 14 years since Hideaki Anno started revisiting his legendary anime “Neon Genesis Evangelion” with the “Rebuild” movies, which may have started out as straight remakes, but quickly diverted into telling their own story as they moved past the events of the original show into unexplored territory. Now “Evangelion: 3.0+1.0 Thrice Upon a Time” brings the long-delayed, highly anticipated tetralogy to a close with a bold, messy, uplifting, audacious, and emotional film that expands, complements, and comments upon what came before, while giving fans a fitting close not only to the movie series, but the entirety of “Evangelion.” With new technology and the benefit of hindsight at his disposal, Anno has finally been able to tell the story he’s been straining towards for his entire adult life — a story of healing and growing up.

After the non-stop misery of the previous film, “3.0+1.0 Thrice Upon a Time” quickly re-introduces the central conflict while reaffirming that this may be a different type of tale than fans are used to with “Evangelion.” Sure, Shinji Ikari (Megumi Ogata), Asuka Shikinami Langley (Yūko Miyamura), and the new Rei Ayanami clone (Megumi Hayashibara) still pilot Evas — giant humanoid mechas made out of extra-dimensional beings called Angels — but the stakes are different. For one, the world has already ended, with Shinji accidentally triggering the cataclysmic Near Third Impact event that tainted the entire surface of the Earth blood-red. Secondly, we move the action away from Tokyo-3 to the streets of Paris, as the forces of the apocalyptic death cult NERV, led by our protagonist’s father, Gendo Ikari (Tachiki Fumihiko), clash with WILLE, a resistance organization comprised of former NERV employees and led by Shiji’s upbeat-turned-stoic guardian, Katsuragi Misato (Mitsuishi Kotono).

Anno and his co-directors, Tsurumaki Kazuya, Maeda Mahiro, and Nakayama Katsuichi, throw the audience in the middle of a big scale action set-piece for the soul of the City of Lights, with WILLE trying to revert the red taint that contaminated the city. A pair of Evangelions piloted by Asuka (Miyamura Yūko) and Mari (Sakamoto Maaya) are all that stand against NERV’s own horde of Evas. It’s an energetic opening scene in which the top of the Eiffel Tower becomes the only weapon capable of stopping the horde — take that, “Pacific Rim.”

After the high-thrill opening, the movie slows down significantly. “Thrice Upon a Time” spends most of its first hour in a long, meditative throwback to the early episodes of the original show, which complemented the cool mecha fights with long stretches of still frames and characters just contemplating their existence. This first act dramatically expands the world of “Evangelion,” showing us how common people have been living in the 14 years since the Near Third Impact, rebuilding communities and trying to purify the planet while dealing with the giant moon floating above Tokyo and the millions of Evas that roam the Earth. The first hour of the film serves as the last respite before the final fight, but also works to unwind the emotional state of our leading trio, and set them on a path of healing.

Despite this section of the film lacking in action, it is the boldest and most visually impressive part of the entire film. Anno brings his experience working on “Shin Godzilla” to “Thrice Upon a Time,” which he approaches more like a live-action film than any of the previous movies. Motion-capture and virtual cameras make the characters move so fluidly that they almost threaten to cross the uncanny valley, yet it works to accentuate the story’s themes. Just as Shinji and the other pilots struggle with finding purpose — confronting their cycles of trauma and even thinking of a future without fighting and without Evas — the world around them has moved forward and grown up, while the pilots are literally unable to age. It stands to reason, then, that the most organic part of the movie, where Anno shows the life that these kids should have had in a less cruel world, would be the one that most resembles a live-action film.

Anno once referred to “Evangelion” as “a story that repeats.” This cryptic message has the double meaning of referring to the existence of the “Rebuild” tetralogy and the franchise probably continuing after Anno leaves. It also means that it is a story of Shinji (and Anno) himself suffering over and over, each time moving forward just a little. This is to say that the Shinji we meet in “Thrice Upon a Time” is a slightly different character than the one from the previous movies, or even the TV show, just as Anno is different than he was when he first embarked on this journey.

This movie follows many of the same basic story and character beats from the last two episodes of the TV show while adding increasingly more extensive changes that amount to a more optimistic and reassuring movie than the infamous “The End of Evangelion.” The film extends a tremendous amount of empathy and understanding even to characters that were previously limited to the background. The new Rei clone, who was mostly just an empty shell of its former self before, now gets an extended subplot about learning to love life. Even the worst father in anime, Gendo Ikari, gets more screen time than we’ve ever seen from him. The father-son dynamic with Shinji is a central part of the story this time, culminating in some of the most emotionally raw moments “Evangelion” has ever put on screen.

“Evangelion” has always used allegory and imagery as window dressing, but the second act of “Thrice Upon a Time” threatens to derail the entire movie by dropping enough new concepts and terminology that are sure to keep wiki-obsessed fans busy for years to come, but distract from the meat of the story. Oodles of bombastic action only deepen that distraction, as the film grows so overstuffed that it becomes difficult to follow, or even contain. The CG animation is at its worst here, with swarms of enemies filling the screen, but feeling like shadows of the high-stakes, dynamic fights against the Angels of the first two movies. The worst thing that can be said about this film is that many of its fight scenes look straight out of “The Matrix Revolutions.”

Thankfully, the film quickly realizes that its fight scenes don’t need to surpass the previous versions of the story, and the climax becomes one last look back at the history of “Evangelion” itself. The final fight combines Anno’s love of tokusatsu, as we revisit scenes from the TV show, culminating in an emotional and stunning remix of the last two episodes of “Neon Genesis Evangelion” that experiments with the animation, presents introspections on characters to heal old wounds and move on. The film even turns subtext into text and offers huge reveals that pay off decades’ worth of stories. It is a testament to Hideaki Anno that he manages to make all the small additions to the story pay off in the end in a way that feels thought out from the beginning, despite an infamously notorious production hinting at the contrary.

The highest praise one can pay “Thrice Upon a Time” is that it truly feels like the “Evangelion” story Anno wanted to tell all those years ago. This is a story that is consistent with everything that came before, while also justifying its existence by adding something essential to this franchise — closure. More than just a filmmaker remaking his most seminal work and replacing or retconning the past, “Thrice Upon a Time” is the culmination of a unique experiment, a “rebuild” that comments and enhances the experience of watching “Neon Genesis Evangelion” while telling a compelling and essential story on its own. Where many franchises end with a wave of nostalgia meant to leave audiences wanting for more, this movie ends with a reaffirming wish to go out into the world and not look back.

“Evangelion: 3.0+1.0 Thrice Upon a Time” is Hideaki Anno finally healing from the making of “Evangelion,” providing closure not only to himself and his characters, but to anyone who has ever seen themselves in them. After 26 years, “Evangelion” is finally finished, and may it never come back. Good night. Good morning. Thank you. Goodbye, all of “Evangelion.” And to all the children who grew up with this story… congratulations.