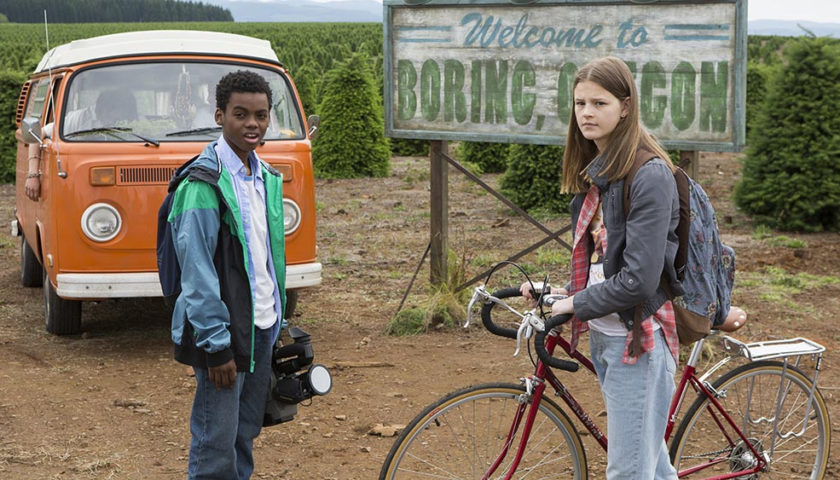 Review: For the review, scroll down to paragraph five. For the added bonus of my incoherent, gonzo-esque ramblings, start reading now.

Netflix releases their original series, (usually) all episodes, at midnight pacific time. When I binge on a new series I’m up exactly when it premieres. I live on the east coast so for me, ‘up’ means awake at 03:00. I don’t have the luxury of being apart of the secret society known as the ‘Netflix Media Center’. Neither do I know their classified handshake, nor possess the diamond-encrusted-Netflix-logo-pinky-finger ring each member is issued (folklore has it that Netflix founder Reed Hastings personally casts each ring in the basement of his medieval castle). So, I’m not privy to advanced streamed screenings of Netflix shows. Ironically, Netflix premieres for me are by ‘appointment TV’. Thus, my appointment is set for 3 a.m.

I’m less of a critic and more of a fan who likes to write, so I don’t mind paying for my streaming services. And, let’s face it, my writing skills are as questionable as my photography skills were when I was making TV magic many years ago (just ask any of the warm props I worked with). But I digress.

It’s now 3:00 am. It’s quiet, the kids are asleep, the wife’s somewhere else. Everything Sucks! has started. Beside me is my morning mocha (an addiction I’m not fond of). On my lap sits my HP-Mini (yes, laugh it up) where I am writing this. A few feet yonder is my work laptop, sitting on a spindly table that was bought for $1.00 at a yard sale in 1995 (how fitting!), streaming the show.

So, in short, this is not a rip-off of Stranger Things (thankfully). Whatever comparisons were/have been made are just asinine. Everything Sucks! is about a group of high school kids attending Boring High School in 1996. Boring is an actual city in Oregon (twinned with ‘Dull, Scotland’, and not too far away from ‘Happy Valley’…seriously, you can’t make this stuff up), with a population hovering close to 7500. I wanted to know the town’s reaction to the series, but my email to Netlfix’s PR rep for the show went without a response. Contacting the Boring CPO (Community Planning Organization) didn’t get me anywhere either. I guess that’s the difference between being a credible journalist and a hack like me.

Anyway, the series mainly focuses on Kate and Luke. Kate (Peyton Kennedy, impressive), a sophomore, thinks she’s a lesbian and is seriously crushing on a girl in her class. She struggles to fit in with pretty much everyone but not because of her (rumored) homosexuality. She’s nicknamed ‘Plutonium’ (as in stay-away-from) because her father, Ken (Patch Darragh), is the principal. Luke (the awesome Jahi Di’Allo Winston) is a freshman and has a serious crush on Kate. He earnestly strives to gain her interest and love, even knowing that the gossip about her sexual preference may be true. ‘A’ for effort, Luke.

They are both in the school’s AV club, along with a few other dweebs: McQuaid (Rio Mangini), wicked smart way beyond his years, sporting nerdy 90s clothes and a 90s-cool slicked-back coiffure. Tyler (Quinn Liebling), the squeaky-voiced comic relief of the group, lives with an alcoholic step father and struggles to read at a 5th grade level; and Leslie (Abi Brittle), is super religious and secretly crushing on Tyler, who can’t take the hint. Overseeing the group is the mellow Mr. Stargrove (series co-creator Ben York Jones – who was born to play this role by the look of it). Clearly, he’s the coolest, most unboring Boring High teacher.

The AV club is battling with the overly-dramatic Drama Club. Scott Pocket (Connor Muhl) anchors the school-televised morning announcements along with Jessica Betts (Nicole McCullough); both are a-typical divas. The real pains-in-the-butt, however, are wannabe actors, and part-time couple, prima donna biatch Emaline (Sydney Sweeney – who you will grow to love as this series plays out) and primo uomo douchebag Oliver (a cunning Elijah Stevenson), who clearly missed his calling as a professional douchebag.

Everything Sucks! starts out kind of boring (lol!), but once the jitters work themselves out, and after we finally meet the entire awkward cast towards the end of the first episode, it becomes quite enjoyable. The series is more of a drama than a comedy; I’d say maybe a 60-40 split. I grew to like and care about the characters, even the douchebag. Peyton Kennedy (as Kate) plays her role with dignity and respect and one can hope that her performance inspires real-life LGBTQ youth to be comfortable in their skin. She delivers a powerful message with confidence. The entire cast delivers in style, and if you have a history like any of the characters they portray, you will get emotional. I did.

There’s a lot of 90s nostalgia, and a soundtrack that brings back fond memories. Oasis, Tori Amos, Spin Doctors, Space Hog. Each episode runs about 23 minutes, on average. It’s the perfect length. I was able to sit through the entire series without getting bored – which bodes well for Netflix because I am a part of the intended demographic (just barely, I graduated high school in 91). Ugh, I feel old.

The comedy is mainly smart, thankfully no slapstick or sight gags. At times I groaned at the jokes, but only because I remember laughing at them when I was a kid. Ugh, I was lame.

The shooting style is like that of Arrested Development – handheld, but not to the point of being nauseating. Tripod-cam would just feel out of sync for this show.

There are so many unanswered questions and the final scene in the season finale leaves the door wide open for another 10 episodes. I miss the show already.