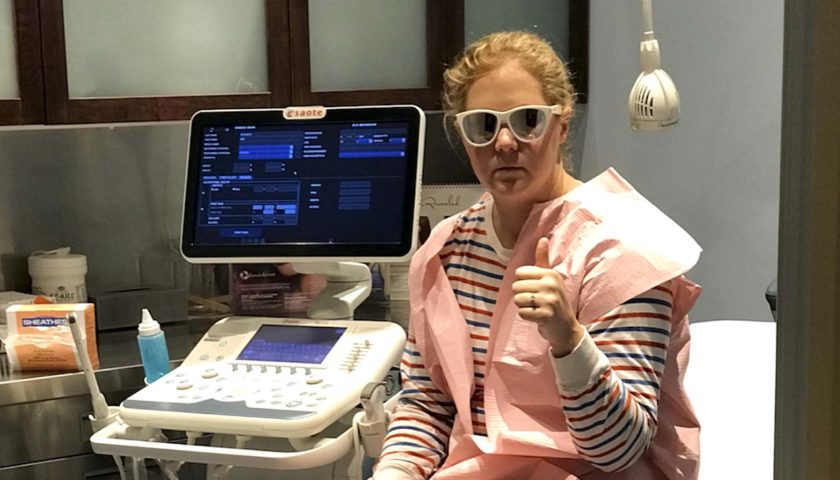 “Expecting Amy,” a new docu-series on HBO Max, opens with its subject, the comedian Amy Schumer, weeping happy tears in a self-shot video. She’s trying to distract herself from the massive personal upheaval soon to be wrought by her pregnancy — or trying to compound her sudden joy — by doing something touristy and cute; she’s at the zoo. As the series runs on, it becomes clear that for Schumer, a trip to the zoo is nothing new, but she’s just usually the attraction, not the guest. Framed as a document of Schumer’s growing family, “Expecting Amy” is most intriguing as a “Truth or Dare”-style examination of fame, a look at the act and life of a comedian coming into conflict.

Here, Schumer works up a Netflix special while adjusting to a still fairly new marriage to Chris Fischer, a chef whose autism spectrum disorder becomes a part of Schumer’s act, to which he doesn’t exactly object, but doesn’t exactly not. Perceived, at least, as a say-everything comic, Schumer includes footage of herself angry that she nearly gave away the sex of her unborn son (eventually born in May 2019) onstage; her line is to pretend that she has chosen not to find out, the better to keep distance. Elsewhere, such lines of personal space between comic and audience fade: Schumer suffers from hyperemesis gravidarum, a type of morning sickness that is so severe as to be both physically dangerous and legitimately life-altering. Throughout the (at times) self-shot series, we see her vomiting often, and yet more often see her simply brought low by the betrayals of her body. “There’s women who would kill to be in my position and be pregnant, and it makes me feel selfish,” Schumer tells the camera, quavering, “but you also need to have space to feel for yourself.”

The intrigue of “Expecting Amy” is in Schumer’s attempt, as one of the comedy elite’s more heavily mediated voices, to grab back some turf for herself. For instance, the tension between wild independence and happy dependence is not new for the comic, but the last time she worked it out — in “Trainwreck,” the 2015 film that vaulted her to mega-fame — it bore the square stamp of director Judd Apatow. Her (genuinely terrific) series “Inside Amy Schumer” became in its final season hard to distinguish from the echoes of fame ricocheting around it. Even the Netflix special we see Schumer toiling at, knitting together small bits that work from appearances at the Comedy Cellar, is notable to many as part of a Schumer-Netflix partnership whose wild lucre made headlines for a time.

Lately, with the warmth and precision-caliber casualness of the Food Network series “Amy Schumer Learns to Cook,” the star has been showcasing in a less distracting setting the wit that made her name. But it’s been easy to lose Schumer amid the noise of the Schumer industry, which makes “Expecting Amy” — what might for another comic be a brand extension — a return to form. Schumer herself has never gone away, but the human-scale sense of her has. Our understanding of her is sharpened even by the series’ scattered moments.

Schumer’s life and career can seem at cross-purposes — so much so that the series, directed and crisply edited by Alexander Hammer, the filmmaker who edited Beyoncé’s “Homecoming” — sometimes hops around. It shows us glimpses of her personal life, then her work, with a skittering unwillingness to stay on any one aspect too long. One of the most memorably lengthy sequences, and the one that most recalls the pop-star concert films that document the punishing quality of life on the road, involves her confronting a young man on public transit who mockingly takes a cellphone photo of her. In her over-it-all willingness to call out one of the strangers who thinks he knows her well and has made up his mind about her, we wonder what’s in it for her.

But “Expecting Amy” is not a bid for sympathy; in the next scene, we see her working out a half-joke about her troll before thinking better of it. (The cameras are rolling, and this isn’t a roast.) Schumer is someone who cannot not be working, and her work is translating her experience into the form of a joke. This makes “Expecting Amy” both a poignant sort of reclamation project and an elaborate if hardly needed defense of her career. This, she says, is how hard I was willing to work, under new restraints and while my body rebelled against me. The only funny thing about it is Schumer’s perennial optimism, a smile breaking through pain that reminds you of the perseverance it took to bring her to where she is, and that’ll likely, even through seismic changes elsewhere in her life, keep her there.