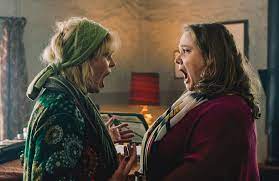 As Luciano Pavarotti demonstrated in Yes, Giorgio, his woeful attempt at screen stardom, opera and romantic comedy don’t necessarily mix well onscreen. Fortunately, this new effort from director Ben Lewin fares somewhat better, thanks to the appealing charm of lead players Danielle Macdonald and Hugh Skinner and the amusingly droll humor for which Scottish characters are particularly suited (it’s hard to take a man in a kilt totally seriously). Undemanding rom-com fans and, to a lesser degree, opera lovers, should take some mild pleasure in Falling for Figaro, although the humor isn’t of Gilbert and Sullivan proportions.

The film’s heroine, Millie (Macdonald, of Patti Cake$ and Dumplin’), is an American working at a London finance firm. As the story begins, she’s got a loving, if not opera-loving, boyfriend, Charlie (Shazad Latif, Penny Dreadful), who also happens to be her boss, and she’s just received a big promotion.

Millie impulsively gives it all up to pursue her lifelong dream of becoming an opera singer. She heads to the Scottish Highlands, where she hopes to be accepted as a student by former diva Meghan Geoffrey-Bishop (Joanna Lumley, Absolutely Fabulous) and eventually compete in the all-important “Singer of Renown” contest. In the venerable tradition of irascible cinematic teachers, Meghan turns out to be less than diplomatic: “This is one of the most delightful arias ever written and you’re turning it into noise pollution” is her idea of constructive criticism. “I’m accepting you as a challenge,” she tells the American arrival.

Settling in at the town’s sole hotel, which also contains its only pub, Millie soon discovers that she has a competitor in Max (Skinner, Mamma Mia: Here We Go Again!), another long-suffering student of Meghan’s who has competed numerous times in the contest without success. Millie and Max, whose facial expression never deviates from glum, become instant rivals. But he eventually warms to her, even helping her recover after Meghan practically strangles her as part of her distinctly hands-on approach to teaching singing.

Will Millie and Max become lovers, or will she reunite with the still-interested boyfriend she left behind? Will Max finally win the competition with his aria from The Marriage of Figaro, or will Millie pull an upset after studying for only a year? The biggest question is, Will any viewers care? Lewin and co-screenwriter Allen Palmer don’t exactly raise the dramatic stakes very high. The formulaic storyline fails to sustain interest, not helped by the sluggish pacing and predictable gags and characterizations.

The endlessly acerbic Meghan, for instance, is the sort of character that Lumley can by now play in her sleep. That the veteran actress manages to inject some fresh notes into her portrayal is a testament to her steadfast professionalism. Gary Lewis (Billy Elliot) is a hoot as the kilt-wearing innkeeper/bartender who never shies away from the truth. “You are sort of the local economy right now,” he tells Meghan, who seems to be his only guest.

Inevitably culminating in the singing competition for which the stakes don’t feel particularly high, Falling for Figaro feels like a step backward for its director, who brought sensitivity and depth to such previous efforts as The Sessions. Still, it passes the time harmlessly enough, thanks largely to the relaxed Macdonald, who never pushes too hard for laughs, and Skinner, who manages the difficult feat of making his character endearing while never cracking a smile.