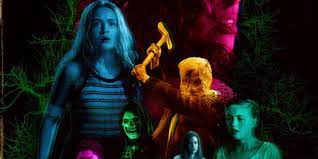 To say that expectations for slasher sequels are low would be to generously assume their existence in the first place, genre history teaching us time and time again that repetition trumps reinvention. After the first film sets up the rules, the second tends to reiterate them to an audience all too aware of what lies ahead, like going back on a rollercoaster directly after getting off, every twist, bump and left turn still fresh in the memory.

It doesn’t always translate to a dull ride but it’s most likely a predictable one, often deeply unnecessary, and such no-fucks-given laziness has given an already scorned subgenre an even gnarlier reputation. But after last week’s premiere of Fear Street Part 1: 1994, a surprisingly effective and ambitious start to a bold new trilogy based on RL Stine’s teen novels, we’d been told, with lapel-grabbing confidence, that all bets were off, that whatever comes next will be nothing like what’s come before. Rather than repeating a staid formula, or even progressing a story in a linear way, the second film would leap back in time to trace the origins of a curse, one that’s turned law-abiding residents of Shadyside into bloodthirsty killers, before going back even further in the final chapter.

It’s an unusual strategy, and while the second instalment is far from an original (it’s far too indebted to Friday the 13th and its many copycats to occupy its own separate space), series writer-director Leigh Janiak’s dogged focus on expanding the world and mythology set up in the first film means that we’re graced with more than just a stalk and slash rehash. Yes, teens still get slaughtered, more of them this time too, but for those able to avoid a machete to the face, there’s a mystery to uncover that’s more complex than who’s behind the mask.

At the end of 1994, our surviving teens were left with dead friends, disbelieving cops and a mysterious call from C Berman (Gillian Jacobs), a local woman who told them she’d survived the killer before but that they’re unlikely to survive him again. In dire need of help, they find her living a locked-down life nearby, relying on deadbolts to protect her from whatever evil killed her sister back in 1978. As the teens make it through the barricade, she sits them down to tell them just what happened at Camp Nightwing and why the Shadyside curse is never going to stop. We then follow the two Berman sisters – one rebellious, Ziggy (Sadie Sink, of Stranger Things) and one conformist, Cindy (Emily Rudd) – as they face off against a deranged killer, unsure which one of them will make it through the night.

The Bermans, as beleaguered Shadysiders, are well aware of a curse but for them it’s less supernatural and more socio-economic, something they’ve learned to deal with in oppositional ways. Ziggy forcibly, angrily pushes back against the Sunnyvale taunts (those from the well-to-do community close-by) while Cindy desperately tries to fit in with them, wearing her type A personality on the sleeve of a crisp white country club-esque polo shirt. The theme of class status being inescapable is much stronger in the second film, that even without the murders that have plagued the town, misery would be an unavoidable part of life. It adds an unexpectedly bleak poignancy to the characters’ fight to survive, as if they’re also fighting against a bigger, crueler system that’s already marked them as doomed, that making it through the night won’t be enough, something horrible will ultimately be waiting.

The unusually slow buildup to the first kill also allows us to see the teens as more than just the jock, the stoner and the rebel (something the slasher films it’s aping rarely bothered to do) and the specifics of who becomes the main foe and how it happens also carries with it an added depth that ties into its bigger tragic theme. It’s a far darker, and grimmer, film than the first, not just aesthetically (the neon hues of the mall, high school and supermarket are replaced with a dank, gloomy forest) but tonally; the kills are that much more gruesome (unlike the majority of horrors, younger children are hacked up with as much vigor as the older teens) and the stakes feel that much higher. Stylistically, 78 is a departure from 94, but what carries on from the first film is how admirably straight-faced the hokey details of the plot are handled. Again, so much of what makes this work is an extraordinarily talented group of young actors who take the silliness of the witch’s curse and sell it with heartfelt conviction. There’s not one dud in the largely untested ensemble cast but it’s probably Rudd who just pips the rest as the standout, her well-calibrated performance adding texture to what could have been a thinly etched type and she exerts a surprising emotional grip, powering through to a tough, gruesomely effective finale.

We’re headed back to 1666 in the third film, out next week, and we find ourselves in a scary place: actually expecting something substantive, or at least surprising, from a slasher sequel.