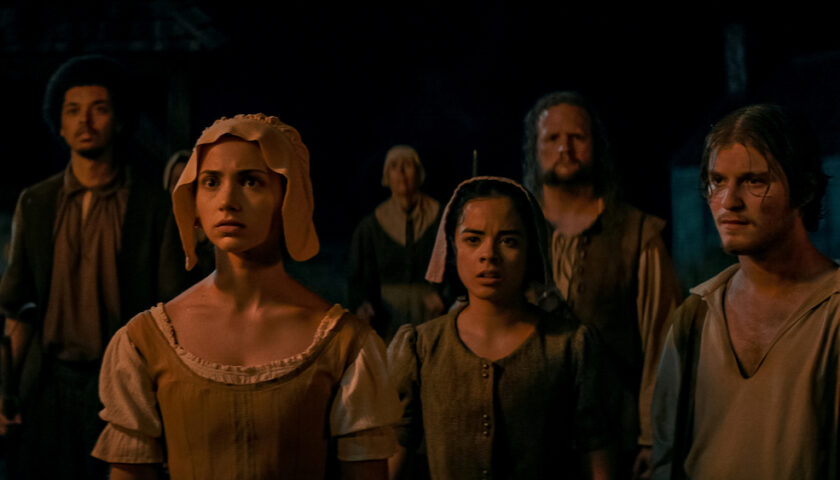 To anyone who’s seen the first two installments of Netflix’s three-part horror collection, it’s almost a formality to describe the initial plot of “Fear Street: 1666.” The ending of “1978” hinted at a possible window to the truth, a chance for Deena (Kiana Madeira) to see the origins of a town’s curse through the eyes of Sarah Fier herself. Memorialized in regional lore as a witch whose wickedness cursed Shadyside to centuries of doom in the form of a spate of serial killers, Sarah is introduced here as a loving sister and daughter who’s as capable helping her brother with the livestock as she is doing good works for her fellow residents of Union, including potential husband Solomon Goode.

Her heart truly belongs, though, to the pastor’s daughter, despite obvious reasons why they can never be together. If parts of this start to feel familiar, it’s helped along by the fact that the cast of “1666” are all “reprising” their roles from the previous two chapters. Sarah’s brother (Benjamin Flores Jr.) has the same face as the boy firing up proto-AIM and surviving a supermarket axe attack. A jaunt through the town square reveals Fred Hechinger, Sadie Sink, and Emily Rudd — previous denizens of Shadyside summer camps and high schools — as those playing the folks who live nearby. After playing Sheriff Nick Goode in “1994,” Ashley Zukerman pulls double duty here as the similarly-named Solomon. And that fateful profession of feelings that kickstarts the rest of “1666” is brought to life by Madeira and Olivia Scott Welch, the two actresses who did the same in “1994.”

Where the first two “Fear Street” chapters deftly drew on their spiritual cinematic ancestors, “1666” feels less stylistically distinct. Rather than lean into any colonial aesthetics, this movie feels too beholden to connect to parts of these stories coming ten generations later. There’s a jarring pace to some of the early character introductions that feels downright frenetic for the 17th century. True, one of the overarching ideas in “Fear Street” is that certain cultural fearmongering — be it in the form of homophobia, class division, or moral panic — are as etched into American life as the names on the stone near the pentagram beneath the Camp Nightwing outhouse. But those connections feel flattened here, with a modernized energy that robs “1666” of most of the real horror that could be mined from the realities of the time period.

There are still some nods to other stories of allegorical witch hunts (it would be more surprising if there wasn’t an “I saw [insert character here] with the Devil!” formulation of some kind) and tales of colonial settlements gone wrong (a new rule of thumb for anyone in a story set before the invention of electricity: do not get attached to any animals). But maybe the most baffling choice of “1666” is to have its ensemble try to adopt a collective mishmash of Northern European accents. (Each cast member’s relative comfort with this creative choice largely correlates with how effective their performances have been in the two films prior.) What starts out as an experiment in the vein of an “American Horror Story”-style anthology occasionally veers slightly toward “The Gang Cracks the Liberty Bell” territory.

As the director of all three of these “Fear Street” films, Janiak’s greatest strengths arrive when there’s dread to be built. As the village of Union starts to literally and metaphorically spoil, each tiny escalation of the townspeople’s fervor helps lock “Fear Street” into what it does best. (Again, it’s not just the humans that start to behave erratically.) If fate is the great bow tying all three of these films together, it only makes sense that some of the most vivid terrors are presented matter-of-fact. As is the “Fear Street” way, once a single, heretofore-carefree member of the community begins to mete out some grisly, arbitrary violence, it sets off an even bigger chain reaction.

To use another momentum-heavy metaphor, by the halfway mark of “1666,” this series is already a giant boulder hurtling toward the showdown it’s been teasing over its previous 5 hours. This installment gives you plenty of help in putting the final pieces in place, and credit it for not dragging out the series’ last big reveal any longer than it does. There’s already a pretty good summation of the Sarah Fier story by the end of “1978.” It’s only when things start to veer from that understanding that “1666” functions as a standalone piece.

Characters throughout “Fear Street” have been doing plenty of on-screen dot-connecting, but “1666” has some particularly pointed asides. Many are designed to fill in any gaps for those who may have missed the outlined rules of demon possession, sacrificial offerings, and corpse reanimation laid out over the first two films. A story with rival factions named Sunnyvale and Shadyside was never going to be a bastion of subtlety, but even by those standards, one late-film statement involving a character’s last name is painfully on-the-nose (and even more egregious when written out in giant letters on the side of a wall).

Despite some of the counterproductive choices in “1666,” the way that “Fear Street” chooses to wrap up this mini-saga is a jolt of inspiration at the finish. The series’ climactic battle is a reversal of sorts of a memorable stretch from a notable genre film released in (when else?) 1978. The foregrounding of one particular character (making good on a promise first introduced in “1994”) gives the last stretch a much-needed influx of energy and humor as all of these disparate bloody threads get braided together. And for those missing the alt-radio greatest hits jams of the first “Fear Street” film, this ending finds a way to incorporate a few more of those for good measure.

It’s all cloaked with a certain air of inevitability. In many ways, that’s the “Fear Street” ethos, that the events set in motion are controlled by forces both more and less mysterious than anyone in this town realizes. The location, the players, and the weapons within this series final reckoning all play out as if prophesied. That’s true all the way up through this last film’s mid-credits scene, which raises the same cheeky-but-eerie question: All of this has happened before, so who’s to say it won’t happen again?