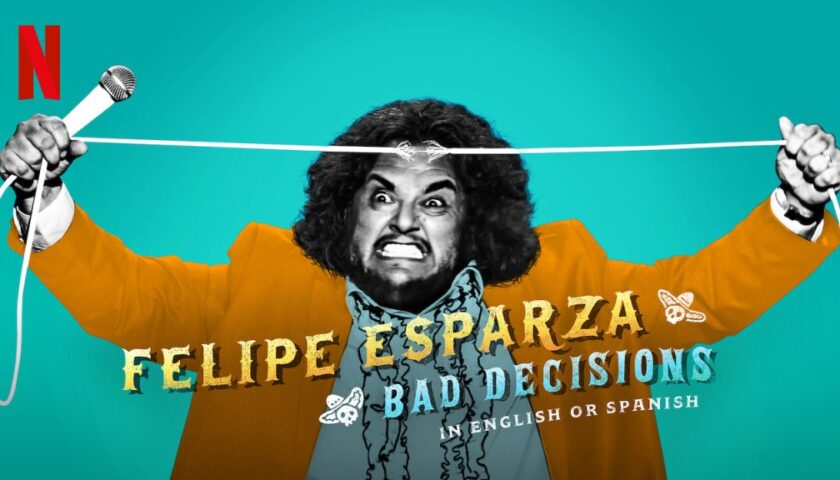 The Gist: Born in Mexico, Felipe Esparza has achieved his “American Dream” a couple of times over, first by outlasting multiple deportations to emigrate here, then by winning NBC’s Last Comic Standing a decade ago, and now by becoming the first stand-up comedian to simultaneously release a special in multiple languages on Netflix.

This is Esparza’s third comedy special. He previously released They’re Not Gonna Laugh at You for Showtime in 2012, and Translate This for HBO in 2017. You may also have seen him in a recurring role on NBC’s sitcom, Superstore, or the new Netflix series, Gentefied, where he plays “Crazy Dave.” Esparza’s real-life crazy lifestyle choices, from childhood to parenthood, make up the bulk of his new special.

What Comedy Specials Will It Remind You Of?: Hey, was that Tommy Chong in the opening scene? That actually makes sense, as Esparza’s charming stoner persona seems cut from the same cloth as someone who had grown up watching Cheech and Chong, and then emulating them.

Memorable Jokes: Esparza makes sure to shout, “What’s up, Fool?” which also is the title of his long-running podcast. As befitting a special called Bad Decisions/Malas Decisiones, we’re treated to lots of stories about going down the wrong path, mostly about men, and mostly exemplified in one way or another by Esparza himself.

He makes fun of himself for not standing up to his own father, while becoming a forgetful father himself, thanks to his marijuana usage. He’s the kind of guy who’ll donate his clothes to the Salvation Army just to make sure someone launders them. And he knows it doesn’t compute that he’s vegan and yet fat. “Don’t laugh. People don’t believe me.”

Which leads to act-outs of him attempting to enjoy sex with his wife or girlfriend (the narrative timeline is as hazy as one might expect for a stoner), or re-enactments of his and other men’s failed arguments with their wives or girlfriends, and the traps men fall into due to their (or his own) laziness. But at least that’s better than dealing with the younger version of Esparza who abused cocaine and meth, right?

Perhaps his best outright joke concerns illegal immigration. Not only does he counter the false narrative of immigrants stealing American jobs, but he also stops the argument in its tracks with an astute observation on how to stop the flow of millions of migrants over the border. To wit: “Well, you’ve got to stop them while you’re counting them coming in.”

Our Take: Esparza’s opening bit about owning and caring for dogs reminds us that the comedian is a bit of a shaggy dog himself. What with his unkempt curly hair, wearing a suit with sneakers and a frilly baby blue tuxedo shirt that spills out above his pants (the shirt is orange in the Spanish hour, with curtains to match). He’s charming, but mischievously so.

The English-language hour ends with a joke about Esparza almost hooking up with a hermaphrodite after a show one night, which might hit a sour finishing note for some. But in the Spanish-language hour, Esparza changes up the order of his material. It’s essentially the same hour. In Spanish, though, he swaps out stage energy for sharper punchlines. He makes more jokes at the expense of his Santa Ana audience, and by putting the hermaphrodite story some 20 minutes earlier, it flows into a running narrative about people (including his own mother and father) questioning Esparza’s own masculinity and macho-ness, then ends with the material about how Esparza sometimes fails at translating that to his own kids or to his stepson.