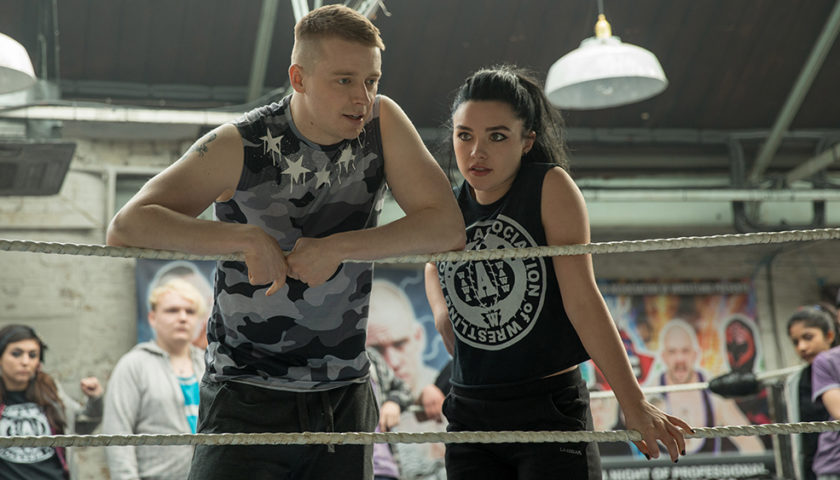 Review: A change of pace from the usual action-driven output from WWE studios, “Fighting With My Family” at times more closely brings to mind 2000’s guilty-pleasure comedy “Ready to Rumble,” one of the few filmmaking ventures by the wrestling conglomerate’s then-rival WCW. The current film has some of the same crotch-kick-level humor, and much of the same shameless brand self-promotion, if regrettably none of David Arquette’s inimitable spazardry. (Still, we get Nick Frost, which is a pretty fair swap.) But there’s less guilt in this pleasure — in fact, it’s probably the best of the 50-odd movies WWE has produced since 2002’s “The Scorpion King,” which starred this film’s producer, Dwayne Johnson, who steps briefly into the action here.

Recounting the real-life story of the rise of Saraya-Jade Bevis — aka Paige — from working-class Norwich, U.K. to WWE Divas Champion at age 21, “Fighting With My Family” may not be an Oscar contender but it has enough wit, heart, energy and good cheer to make it a fun watch even for non-wrestling fans. MGM plans a limited theatrical release in New York and Los Angeles on Feb. 14, before going wide the next week; Lionsgate is handling the U.K., Universal other territories.

We meet Paige, played here by Florence Pugh of “Lady Macbeth,” as the least invested member of her wrestling-crazy family; she’s taken her monicker as an homage to the character on the TV series “Charmed” played by Rose McGowan (who incidentally was also in “Rumble”). Biker-looking dad Ricky (Frost) and Chrissie Hynde-esque mum Julia (Lena Headey from “Game of Thrones”) are more than happy to tell the world that wrestling turned their lives around from some rather sordid beginnings. Actually, things still look pretty sordid, particularly as the brood makes its threadbare living involving the entire family in a wrestling school and amateur bouts.

The film focuses on Paige and brother Zak (Jack Lowden), who has serious pro aspirations; everyone is thrilled after the pair’s video wins them an audition when the WWE circus comes to London. Their dreams really do seem to be coming true, especially once they luck into an encounter with Johnson, who’s making a quick stadium return as “The Rock.” Yet Paige, the sole woman under consideration at the audition, also turns out to be the only contender selected for further training. She must go off to Florida alone, leaving behind a devastated Zak. With a new wife (Hannah Rae) and baby, he can’t accept the apparent failure of what had been his life’s goal.

In Orlando, Paige’s Goth style doesn’t mesh with the other, more conventionally sexy female wrestlers. Nor does anything about her seem to impress the program’s pitiless drill sergeant-cum-talent coach Hutch (Vince Vaughn), whose task is largely a process of elimination. Lonely and depressed, missing home, she comes very near quitting before … well, suffice it to say, this just isn’t the kind of movie in which failure is ever really an option.

The screenplay, by frequent Ricky Gervais collaborator Stephen Merchant, who here directs his second feature, never strays far from the familiar triumph-of-the-underdog template, taking considerable liberties with the facts to present a cleaner, more crowd-pleasing package (Bevis’ real journey from Norwich to the WWE was more gradual than the overnight leap portrayed here). But things generally play fine; despite the predominantly working-class English milieu, “Fighting” is slick and brassy, with occasionally crude humor thrown in. There are some baldly corny, manipulative elements, in particular a couple of Inspirational Speech 101 interludes. The film admits the world of “wrestling entertainment” is scripted (if nonetheless bruisingly athletic), then conveniently forgets that for a climax — Paige’s 2014 battle with AJ Lee for the Divas Champion crown on “WWE Raw” — that we’re meant to take as real.

What prevents it all from being as hokey as WWE wrestling events themselves is the warmth and good humor Merchant brings to the material, as well as the excellent cast. Everyone here makes the most of some decent throwaway banter, albeit none quite so much as Frost. Vaughn is in good form in a role tailor-made for his caustic comic flair; Johnson pops in for a couple of genial, flashy cameos.

Pugh may almost oversell our heroine’s self-doubts; we’re never quite sure she wants this dream as much as she obviously needs to want it in order to attain it. Yet the actress still contributes another impressive turn to her fast-tracked resume. The standout performance here, though, belongs to Lowden (“Dunkirk,” “Mary Queen of Scots”), who makes rejected Zak’s heartbreak vivid enough to lend the film moments of real pathos.

Though it doesn’t lay on standard WWE glitz too heavily, “Fighting With My Family” still features polished tech and design contributions and a soundtrack that includes plenty of the kind of amped-up rock cuts one expects, by the likes of Motley Crue and Motorhead.