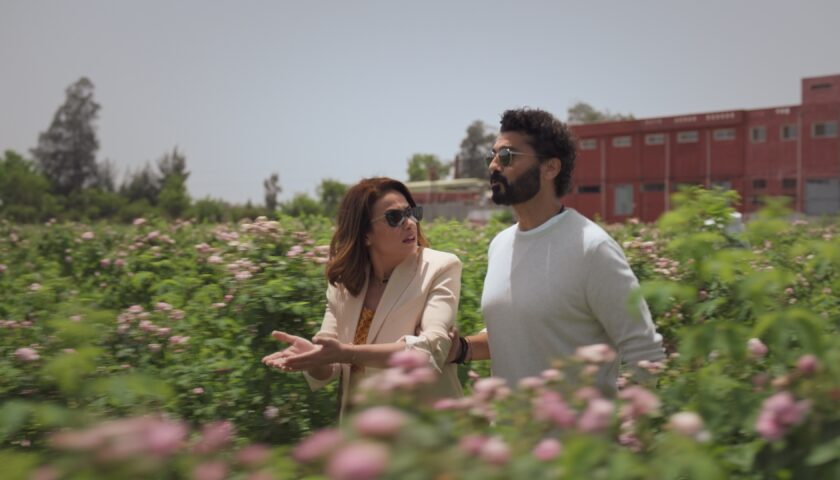 Have I been living under a rock, or is this your first encounter with an Egyptian show as well? If this is characteristic of Egyptian shows, we are truly missing out on a big chunk of excellent content. Compared to the conventional representations of Arabs in mainstream media, which feature them with loaded weapons and explosives, this series provides a fresh perspective. The portrayal of a warm, sweet, and normal Egyptian family defies all of the blatant clichés that American media imposes on Arabs.

The protagonist, Ola (Hend Sabry), is a 40-year-old newly divorced mother of two. The series follows Ola as she struggles to find her new identity amid these unusual events. Even more so, learning her true identity. She sacrificed a great deal of her time and energy to make sure she could become the perfect mom and wife, and it created a claustrophobic environment for her ex-husband that ultimately leads to their divorce.

In the wake of her husband’s departure despite her best efforts, reality hits her hard. As she explores her true identity, she reconnects with her long-lost best friend, Nesrine (played by Nada Moussa), and ventures into a business. It then goes on to capture her growth, her true identity, and various dynamics that shift throughout the series.

Even though the narrative has been recounted, this show immediately captivates the audience. The writing keeps it fun, easy-going, and relaxed while retaining a nice flow. The screenplay, like many sitcoms, contains a high level of drama yet presents itself in a way that doesn’t overwhelm the spectator but rather keeps them engaged throughout.

The dynamics that are created between characters are one of the key strengths. Divorce alters many relationships, in this case, particularly between a controlling woman and a claustrophobic husband. Other relationships, such as children adapting to the divorce or the mother-in-law’s lack of control over Ola are tackled realistically without depending on excessive romanticism.

Characterization is another noteworthy aspect. There is no such thing as a flawless character in the show. They are all neither good nor bad; they all have imperfections that are portrayed naturally and realistically. Initially, the husband’s perspective on their issues seems relatable. Ola’s shortcomings are readily apparent. Our story continues to unravel as we discover how she came to be the person she is. We learn that she is capable of unlearning and her husband is actually a man-baby who hides behind his mother and is definitely not as pious as he seems to be.

Although all of this is great, it is her long-lost friendship with her best friend that stands out the most – a friendship she gave up for the benefit of her husband. The two of them reunite and create some of the show’s funniest and most enjoyable scenes. A pair whose bond is truly enjoyable and pleasing to watch.

The show initially portrays women as pitted against one another, creating the evil mother-in-law, it eventually breaks this stereotype. It is heartwarming to see Ola become acclimated to her ex-husband’s girlfriend, realizing that she’s not an enemy and standing up for her. The show goes beyond simply proposing challenges to society, it also celebrates these challenges, as indicated by the women, who are truly delighted and celebrate the fact that Ola is divorced and can start a new chapter in her life.

A generation gap is also authentically depicted in the series. In her interaction and introduction with young people, Ola truly falls in love with herself. Her daughter’s acceptance of the fact that she divorced or her love interest with someone several years younger than her allows her to see herself in a new light.

The business aspect of the show is portrayed too simplistically, making it appear easier than it really is. Her success and the efforts that go into a business seem to be dismissed as an overnight success. Nonetheless, it is understandable given that the emphasis of the show is on her personal growth.

The show doesn’t lose its charm despite this. As Hend said, although the show is authentic to Egyptian women, it still strikes a chord with all women. The show is a total binge-watcher that will keep you up all night and bring you joy.